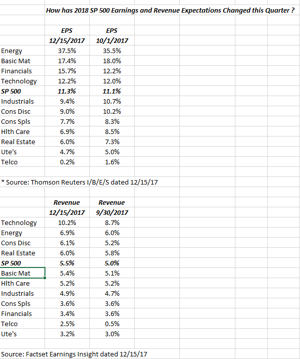 Leaning bearish into 2018, these numbers were somewhat surprising:

1.) Revisions for next year have been positive for both year-over-year S&P 500 EPS and S&P 500 revenue growth.

3.) It's pretty clear the cyclical sectors are leading the way again or are expected to lead the way in '18.

Frankly, I've been looking for reasons to be bearish or to have "tempered enthusiasm" but these numbers are pretty solid.

Brian Gilmartin, CFA
9.06K Followers
Brian Gilmartin, is a portfolio manager at Trinity Asset Management, a firm he founded in May, 1995, catering to individual investors and institutions that werent getting the attention and service deserved, from larger firms. Brian started in the business as a fixed-income / credit analyst, with a Chicago broker-dealer, and then worked at Stein Roe & Farnham in Chicago, from 1992 - 1995, before striking out on his own and managing equity and balanced accounts for clients. Brian has a BSBA (Finance) from Xavier University, Cincinnati, Ohio, (1982) and an MBA (Finance) from Loyola University, Chicago, January, 1985. The CFA was awarded in 1994. Brian has been fortunate enough to write for the TheStreet.com from 2000 to 2012, and then the WallStreet AllStars from August 2011, to Spring, 2012. Brian also wrote for Minyanville.com, and has been quoted in numerous publications including the Wall Street Journal.
Follow
11 Comments