Japanese goods producers are enjoying their best quarter since the start of 2014 having seen business conditions improve to the greatest extent in nearly four years in December, setting the scene for the industrial upturn to extend into next year.

The Nikkei Japan Manufacturing PMI™ rose from 53.6 in November to 54.2 in December, the highest in almost four years, according to the preliminary flash* reading. This extended the current run of manufacturing growth to 16 months.

December PMI data took the average PMI reading for the fourth quarter to the highest since the opening three months of 2014, suggesting that the goods-producing sector is making a solid contribution to overall economic growth. 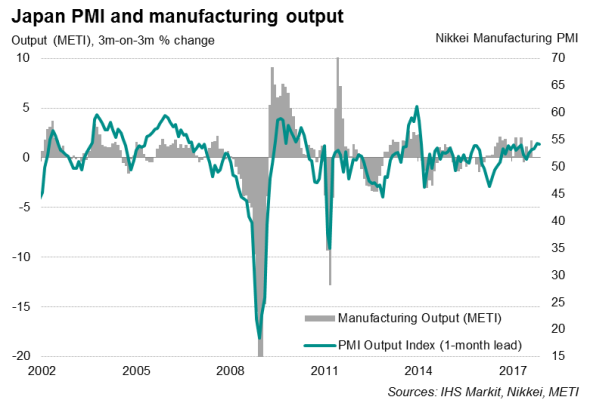 The headline reading is a composite indicator derived from survey questions on output, new orders, employment, inventories and suppliers' delivery times. As such, the PMI gives a broad indication of the health of the manufacturing economy each month but also provides a reliable steer on the performance of the wider economy.

While factory output increased markedly in December, it was a strong pick-up in overall order book growth that was the most encouraging development. New business inflows showed the largest monthly increase since January 2014.

Export growth has been a key driver of the recent order book upturn. The PMI survey's new export orders index (measured in volume terms) - which exhibits a correlation of over 70% with comparable official export data with a two-month lead - rose further in December to its highest since November 2013. This was attributed by producers to strong overseas demand, as well as the weakened yen. An improvement in competitiveness has risen from the yen's recent depreciation, with the currency down 5% against the US dollar since early September. 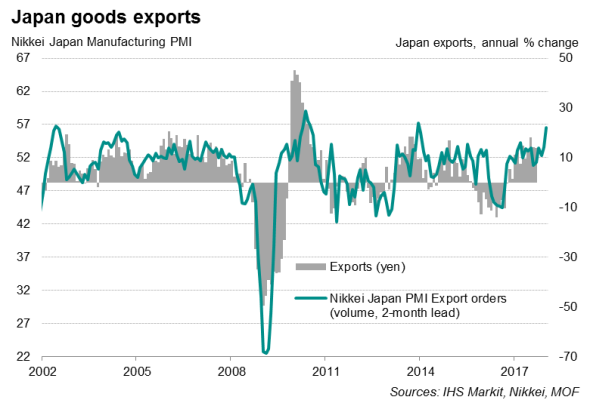 The flip side of a weaker yen, however, was another steep rise in import prices, which pushed overall input costs up at the second-fastest rate in three years, though that should be good news for a central bank seeking to bring up inflation.

However, although some of the higher costs were passed on to customers as firms sought to protect profit margins, selling price inflation remained well below that of input cost increases. Firms' reluctance to raise selling prices at a level that matches input cost inflation continued to undermine efforts by the Bank of Japan to meet its inflation target. 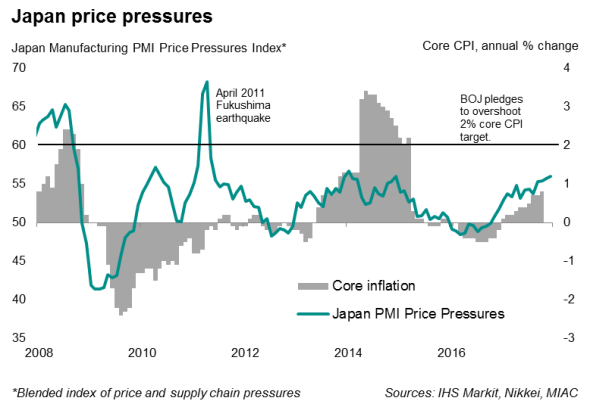 The sustained upturn in manufacturing, the strong growth in export sales, and the intensification of cost pressures augur well for future economic activity as Japan moves into 2018. While inflation remains below the official 2% goal, the ongoing squeeze on companies' margins will likely alleviate as the economy continues to revive and eventually feed through to higher consumer inflation. That will, in turn, add to expectations of policymakers withdrawing monetary stimulus and normalising interest rates, especially given BOJ concerns that negative rates may have hurt financial institutions' profits.

Next week's BOJ meeting, as well as the release of Japan's final PMI surveys for December (manufacturing and services) in the first week of January, will provide further clues on future monetary policy.

*The Flash PMI is based on 85-90% of total responses each month.

Markit
2.36K Followers
IHS Markit (Nasdaq: INFO) is a world leader in critical information, analytics and solutions for the major industries and markets that drive economies worldwide. The company delivers next-generation information, analytics and solutions to customers in business, finance and government, improving their operational efficiency and providing deep insights that lead to well-informed, confident decisions. IHS Markit has more than 50,000 key business and government customers, including 80 percent of the Fortune Global 500 and the world’s leading financial institutions. Headquartered in London, IHS Markit is committed to sustainable, profitable growth.
Follow
2 Comments