I fully admit that I sometimes give in to clickbait. You know, the article with the titillating title: “One Chart That Shows YOU Something Amazing”, or something similar. Much as the man said about divorce, reading clickbait is the triumph of hope over experience. Very little in this complex world can be boiled down into a single handy chart, and what very little can probably isn’t worth very much.

After all, a single number doesn’t reveal a whole lot. Take everybody’s favorite (or not—opinions differ!) ratio, the humble price-to-earnings ratio. For any given company, the PE embeds a lot of coded information, and relying on the PE alone, it has been said repeatedly, is a surefire way to miss opportunities or fall into traps. A high PE might reflect growth opportunities, low capital requirements, or low earnings volatility; a low PE might reflect the opposite. And a PE for a company in one given industry might not mean the same thing for different company in a different industry.

So much for individual companies, then. In the aggregate, though, PE becomes much more useful as a single number, as it discounts considerations material to any single company and instead considers the economic prospects facing the market as a whole. And while there is a limit to the generalizability of any aggregated data set—much like a hot dog, you’re sometimes not entirely sure what goes into it—this bird’s-eye view still offers a lot to a retail investor like me. And when you start aggregating the aggregate data sets—that’s when a real powerful picture begins to emerge.

All that to say the following single handy chart says a lot about the S&P 500 (SPY), as of Friday last week. 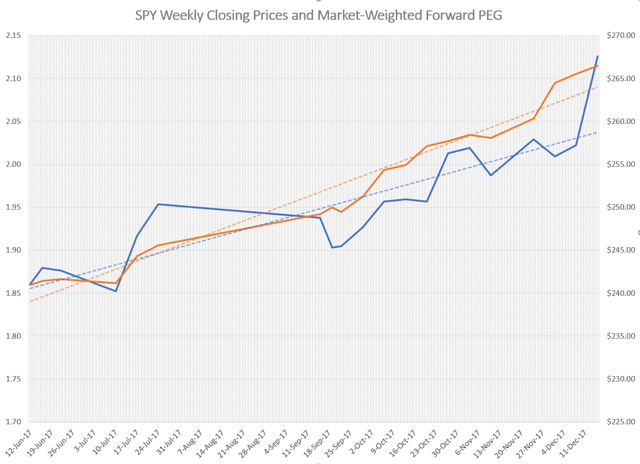 (Data collected from Yahoo!Finance, Finviz, Morningstar, and Zacks. All calculations by author.)

That is a chart of weekly closing prices (or close to it—I lost reliable internet in the month of August) for the S&P 500 plotted against the aggregated, market-weighted forward Price-Earnings-Growth ratio for the index. I gathered up forward earnings estimates and growth estimates for every company in the S&P 500 about once a week for the past 6 months, and calculated a market-weighted forward PEG ratio. Watching the ratio over time and comparing it to the price action for the SPY leads to one inescapable conclusion: investors are paying almost 15% more per unit of earnings and growth than they were just 6 months ago. 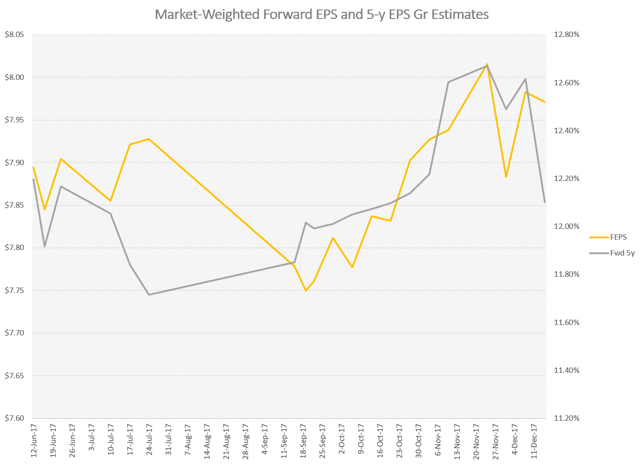 This is not merely a function of higher prices reflecting an improvement in economic circumstances or accounting for the time value of money. If that were the case, one might expect the SPY’s price to have gone up and the PEG to have stayed the same. That’d be just fine. No—prices have gone up significantly, while growth estimates have remained relatively unchanged. Forward EPS estimates have climbed by about 1% or so, and forward 5-year growth estimates have flatlined. All told, if PEG ratios were stable, the S&P probably should have climbed about 1-2% or so over the past 6 months—instead, it’s up about 15%! It looks like investors are more willing to shoulder the risk of future disappointment, or they’ve decided en masse that analysts are being too pessimistic. While the latter is possible (and skepticism of analyst estimates probably does play a contributing role), the sheer pervasiveness of the trend suggests the former is more likely. 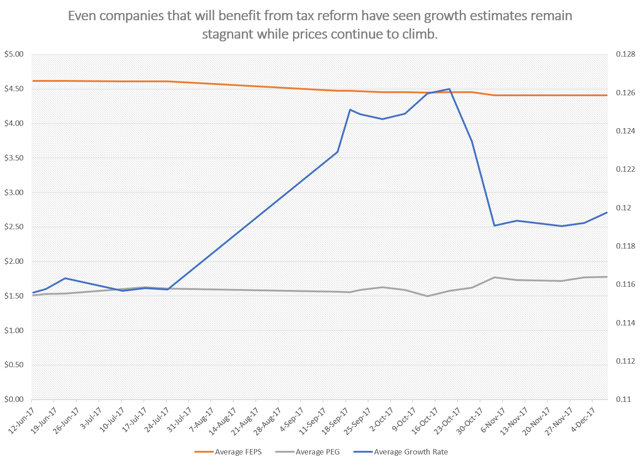 I’ll point out that these graphs were constructed using a “bottom-up” approach, taking individual analysts’ estimates (which are themselves already pretty optimistic) for each S&P 500 component. That means we can do a couple things, like break out PEG ratios by individual companies. For example, one reason that has been widely cited for the rise in stock prices over the past year has been widespread optimism about the impact of tax reform (read: corporate tax cuts!) on corporate earnings. With Republicans now having secured the necessary votes to all but guarantee passage of whatever bill makes it out of conference, one might expect growth expectations for certain highly-taxed companies to have improved, coupled with a fall in their respective PEG ratios. But perversely, companies thought to perhaps benefit the most from tax reform (as suggested by CNBC, CNN, and Business Insider) have actually seen median forward EPS estimates fall for next year, while forward growth rates have remained relatively stagnant—all while prices have appreciated by about 9%. Even those companies getting a big wet kiss from the federal government aren’t expected to grow their earnings by very much—if at all—but they’re getting more expensive anyway.

Finally, that part about analysts being a generally optimistic bunch at baseline? Despite prices having moved upward whilst forward estimates have stayed running in place, analyst targets have inched steadily upward. 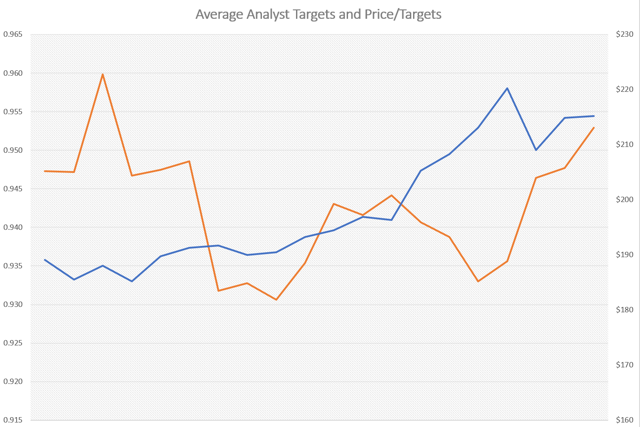 That’s right, Wall Street wants you to keep buying the S&P 500. As stock prices have moved steadily to the sky, so have analyst targets—even though analysts don’t necessarily think that things are going to look better for companies’ bottom lines moving forward. The average stock in the S&P 500 trades with about 5% upside remaining for the next year, suggesting that analysts might think that the market is fairly valued, but there’s still a chance to get in before things really get out of hand. I’d say listen to them at your own risk.

The reader may point out—as many have—that I have been calling the market a bit expensive for a while now (certainly I did in my previous articles from 6 months ago). Really, my view hasn’t changed, and nothing in the data suggest that I need to revisit my thesis. It’s possible that the market could experience a change in economic conditions that would prompt a 15% improvement in both earnings and forward growth rates for the next 5 years, one that dedicated analysts haven't predicted yet. But even if such a phenomenally unlikely event did occur, then all it would do would restore valuations back to where they were 6 months ago—when things were merely a bit dear, as opposed to—well, whatever it is we have now. Me personally, I’ve been steadily increasing my cash allocation, trimming my winners when their valuations approach the limits of my comfort level. I’m 25% cash or cash equivalents in my own portfolio at the moment, and I’m moving a lot more of my purchases to ex-US areas.

The bottom line is that if you’re buying the market now, you’re almost certainly paying too much. If you thought stocks were expensive 6 months ago, then things really have only gotten worse. And if you thought the market was cheap 6 months ago, it’s definitely not cheap now. And if you think stocks are cheap now—well, I guess I’ve got some tulips you might be interested in.

Investing Doc
986 Followers
I'm a physician with an interest in building a portfolio for total return. I subscribe to Ben Graham's value investing ethic, and am most interested in finding long-term investments trading at significant discounts to fair value.
Follow