The yield curve flattening will revert

Several articles have discussed at Seeking Alpha and in the economic press the likely impact of the flattening of the yield curve on US banks.

This phenomenon seems to be caused by technical forces and the intervention of the Treasury at the short end of the curve and by the particular moment of the economic recovery – limited credit growth, weak banks pricing power - in the long end. Based on this analysis, we believe the flattening of the curve will be temporary and will end with the re-gearing of the US economy.

It is true the flattening of the curve has been remarkable. For all maturities the curve has significantly flattened between early 2017 and mid-November:

Why is this happening? In the context of an economic recovery the yield curve should become steeper on its long end as economic activity stimulates the need for loans from businesses and households while short-term rates should stay stable at significantly lower rates.

The flattening of the long term part of the curve is probably due to the extremely long nature of the recovery we are experiencing since the 2010 bottom of the crisis.

There are many similarities between the current economic expansion and that of the “roaring 20s,” very well described in the interesting book “Anatomy of the bear.” In Minskyan terms, the deep reorganization of balance sheets – public and private – during the second biggest financial crisis in 100 years has laid the ground for a long-term recovery; we are at the low mid level of it, even after several years of purging the excesses of the mid-2000s boom.

The weakness of credit demand created by this state of affairs combined with a group of institutions “forced” to be invested in the long-term leg of the curve – insurance companies and pension funds seeking duration and big passive mutual funds such as Vanguard and Blackrock – makes a reasonable guess that the longer side of the curve will stay muted for a while.

On the short-term leg, reasons for an increase of yields are to be found mainly around the Treasury funding strategy. Within the framework of the biggest Federal deficit since 2013, the US Treasury made public on Wednesday, 1st of November, its decision to focus on the issuance of short-term maturities debt, while even considering the possibility of issuing ultra short-term debt such as a two-month treasury bill.

This policy, when implemented, should contribute to increase yields on the short-term part of the curve and could be already having a significant impact on the pricing of short-term bonds via the expectations link. 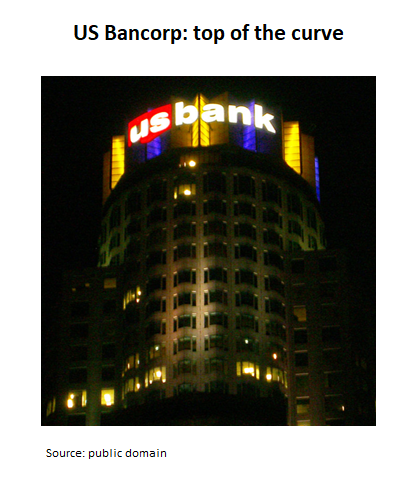 Despite the flattening of the curve, the impact on earnings of US banks on a mid-term horizon should be limited. The yield curve is a rough measure of the NIM of banks, whose shape is conditioned by several other factors such as 1) the structure of the commercial banking industry 2) the divisional structure of a bank and its strategic positioning in the market 3) the split of liabilities between deposits, long-term funding and short-term paper 4) the structure of the loan book in terms of maturity, yields and interest rate risk hedging 5) the pricing power of the financial institution in its geographic area of operations and 6) the flexibility to adapt to adverse changes in the curve and take advantage of the positive.

For main US banks Wells Fargo (NYSE:WFC), US Bancorp (NYSE:USB), Bank of America (NYSE:BAC) and JPMorgan (NYSE:JPM), the temporary flattening of the curve does not seem to have generated a significant hit to revenues, even if the liabilities side of the balance sheet has increased its costs significantly in relative terms.

Following the article recently published in Seeking Alpha “Bank Review - Are Banks the new risk-free asset?” interest expense to finance the assets side of the balance sheet has increased significantly – 45% for JPMorgan, 58% for Wells Fargo and 26% for Bank of America. US Bancorp has increased this line 35% between 2016 and 2017 as well.

This phenomenon has arisen in combination with a far more moderate increase of Interest Income in relative terms – 14% for JPMorgan, 11% for Wells Fargo, 12% for USB and 11% for Bank of America.

Nevertheless, given that the interest income line is far higher than that of interest expenses, the overall effect has been a moderate increase in Net Interest Income for the banks analysed.

The implicit thesis of the author seems to be that further increases of the shorter leg of the curve will increase funding costs for US banks, therefore damaging their revenues and, ultimately, net profits and stock prices. 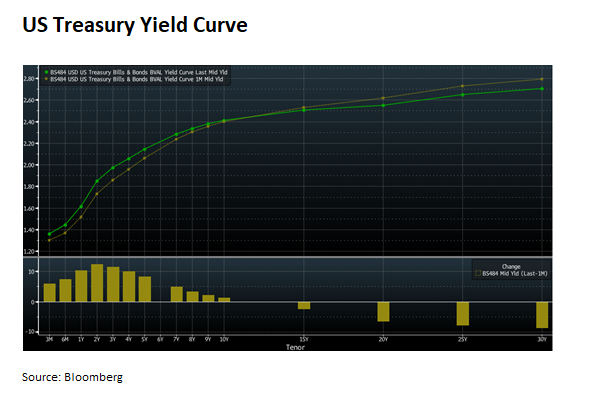 This thesis seems unlikely to us for several reasons.

First, the mix of funding deposits/long-term funding/short-term paper for the four banks will restrain a sudden increase in liabilities costs. Of the three sources of funding mentioned, the increase in short-term yields will not impact long-term funding and will have a very limited impact on deposit funding costs, which are known to be notoriously “sticky” when competing with other short-term investment options. This is particularly important for Wells Fargo and US Bancorp, whose portion of deposits as a funding source is around 76% and 83% of the balance sheet liabilities, respectively.

Second, as highlighted above, even if increases in the cost of liabilities are very significant on a relative basis, in absolute terms they are smaller than increases in interest income for the four banks analysed. Therefore, even if Net Interest Margin could contract in the future, something that has not materially happened yet, the absolute amount of profits produced by the intermediation business should keep increasing, therefore adding bottom-line profits through the cycle. It is very difficult to see how a flat curve could change this dynamic; for that to happen a full inversion of the yield curve should take place, something which is very unlikely.

Third, Net Interest Income is only a limited portion of banks’ earnings analysed. Roughly half for JPMorgan Chase, 57% for Wells Fargo, 51% for Bank of America and 56.8% for US Bancorp.

Summarizing, the flattening of the curve is not a threat to net profits of US banks; on the contrary the re-gearing of the US economy in the extraordinarily long cycle we are living in should make the longer part of the yield curve steepen, therefore increasing yields of US banks from the loan book. This, combined with more appetite for credit, typical for the upper part of the business cycle, should increase notably banks’ profits.

As a consequence, there is still money to be made in US banks on a mid-term horizon; the very high returns reaped during last 5 years will not come back soon, but a reasonable income in terms of stock appreciation and reinvested dividends seems to be a feasible option.

The First Mover
576 Followers
I am the Managing Director of an asset manager focused on financials. I have experience as a banks analyst working for investment banks and global hedge funds.
Follow