With UST yields backing up a little bit after the yield curve collapsed so far so fast, the combination of tax cut and reform "stimulus" juxtaposed with the constant, non-transitory mainstream message of recovery and growth has left us with yet another BOND ROUT! It has been somewhat if not completely reminiscent of earlier in 2017 when the mere promise of this kind of fiscal action triggered the same kind of talking points.

On February 8, the 10-year UST yield closed at an indicated yield of 2.34%, down substantially from "reflation" highs just weeks before. The following day, President Trump promised the most ambitious tax plan since the days of Reagan. Not only that, the White House indicated it was at most two to three weeks from materializing.

That's coming along very well. We're way ahead of schedule," the president said. "We're going to be announcing something I would say over the next two or three weeks that will be phenomenal in terms of tax and developing our aviation infrastructure."

Bond yields would gyrate wildly over the next month, rising to 2.51% in just a week as Treasuries were sold hard on the idea, falling back to 2.31% by February 24, and then another BOND ROUT! that took it to 2.62% (the high so far for Reflation #3) by the second week of March. You might develop the sense that bond yields can be quite volatile in the short run, particularly when so-called big things are being absorbed and analyzed as to whether or not they really are big things. 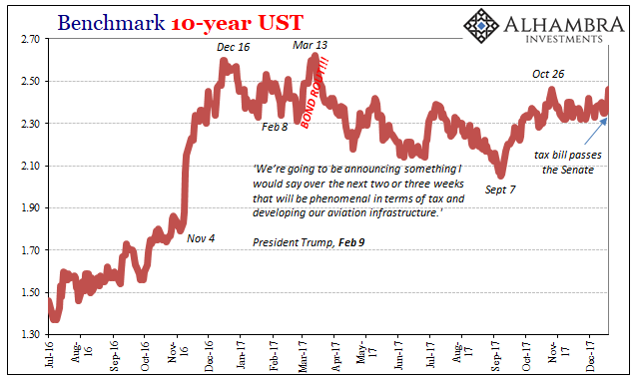 It's fair to write that the actual passage of the thing is far less of an event in the bond market than that initial introduction. In recent weeks, as the bill's probability of successful navigation through Congress rose to 100%, yet bond market reaction has been muted apart from the past two days. Even then, it's not much of a difference so much as another small adjustment in the endless ocean of adjustments that are short-term markets.

It's one reason why we look for corroboration among other prices. If the bond market was actually treating the tax bill as "stimulus" we would expect that it would show up not just in nominal terms but also real yields, too. TIPS, for instance, would almost surely assign a higher expectation for future inflation. That market, after all, is paid directly by the government at a rate equal to the CPI, therefore inflation expectations are in this case real money. 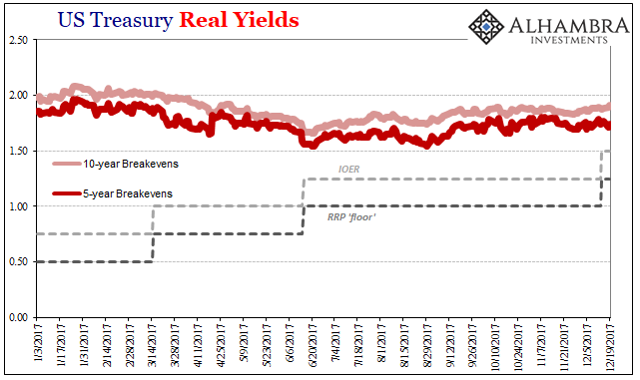 In general, inflation breakevens (the level of CPI inflation the market expects to be compensated for on average for holding a particular TIPS, derived from the difference in yield on the UST of equivalent maturity and the "real" yield of the same TIPS instrument) have been rising if ever so gently since late June. For the year, they are lower than when they started.

The Federal Reserve's "rate hikes" have produced no discernable impact on TIPS trading, which suggests very strongly that the market views monetary policy as tilting at nothing more than a metaphorical inflation windmill. In other words, the market literally isn't buying "transitory" nor the unemployment rate.

Tax cuts are in many ways the other side of the mythical "stimulus" spectrum, the other half so to speak of "aggregate demand" theory transplanted into "supply side" thinking. TIPS trading finds this tax reduction far less enthralling than those included in the ARRA many years ago - and for good reason. Those prior (and more widely based) cuts didn't work in combination with four QE's and year after year of ZIRP, why should they all of a sudden start to now? 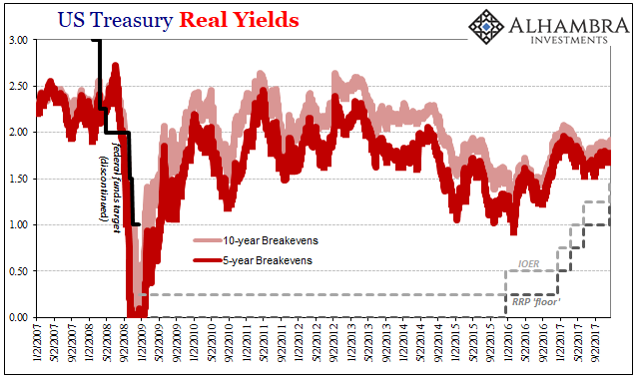 As you might expect, market pricing of inflation expectations in this way has been pretty good at hitting the CPI over time (another empirical argument against perfectly efficient markets). Unlike the econometric models all the economists continue to use, there is a very real price to failure. In TIPS, that was set up by traders starting in 2012 when it was still widely believed Mario Draghi (promise) and Ben Bernanke (more QE) knew what they were doing - that the secret to eventual recovery, therefore inflation, was time and the "right" amount of monetary "stimulus." 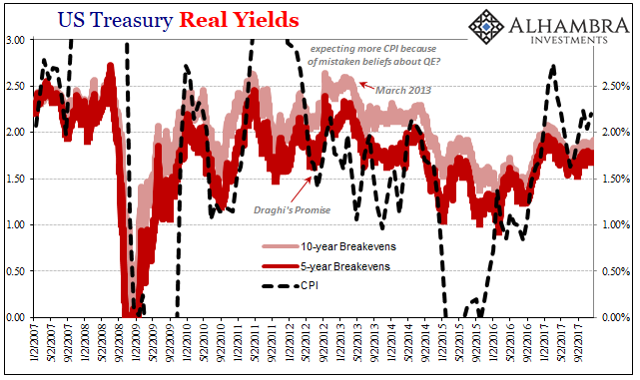 For several years until the "rising dollar" really started to bite, inflation breakevens overshot the CPI by a considerable margin. The adjustment toward less faith in "stimulus" actually started in February 2013, gaining steam the following month long before the word "taper" had been introduced (copper then gold prices were hit hard during that period; oil would follow in late 2014 completing the deflation trifecta).

What also stands out is that these market-based inflation expectations don't follow the spikes, either. What I mean by that is when the CPI surged toward 6% in 2008, breakevens stayed relatively stable (TIPS are looking for an average CPI). Again in 2011, the CPI ran toward 4% on the strength of oil price effects, but breakevens followed only a small part of the way before being forced back lower in recognition of what was really going on (credit-based currencies) in the middle of that year.

Yet one more time, the CPI jumped earlier this year, moving closer to 3% than at any since then. Inflation breakevens also followed but only partially, having remained subdued for most of this year despite intermittent oil price boosts. The market just doesn't expect it to last, meaning not one hint of further or sustained acceleration. 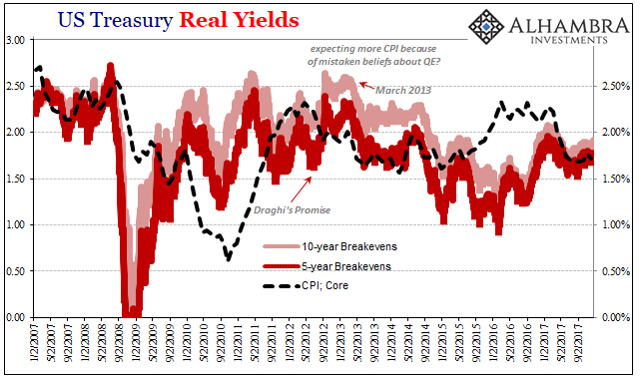 Since breakevens have largely stayed within the range of 1.50% to 2.00%, that's better than during the "rising dollar" period but appreciably less than before 2013 or the 2.00% to 2.50% range that prevailed pre-crisis. Neither tax cuts nor "rate hikes" have shifted the outlook (it was only Reflation #3 that moved them up from the 1.00% to 1.50% range, a rebound that was merely a reassessment of how bad things were going to be; really bad heading toward something like 2008 as was feared by early 2016, or just the usual plain persistently bad as it stands right now).

None of this is an argument against tax reform in general or even the specific law that is being presented. Instead, it's a market view that tax changes as a matter of economic "stimulus" still aren't stimulus; just as they weren't in 2009-12, nor as they were sure to have been in the helicopter Bush tax cuts of 2008. Unlike FOMC policymakers, the market has become more data dependent over time (whereas those economists have become less), established as a gross empirical matter.

Jeffrey Snider
4.64K Followers
As Head of Global Investment Research for Alhambra Investment Partners, Jeff spearheads the investment research efforts while providing close contact to Alhambra’s client base. Jeff joined Atlantic Capital Management, Inc., in Buffalo, NY, as an intern while completing studies at Canisius College. After graduating in 1996 with a Bachelor’s degree in Finance, Jeff took over the operations of that firm while adding to the portfolio management and stock research process. In 2000, Jeff moved to West Palm Beach to join Tom Nolan with Atlantic Capital Management of Florida, Inc. During the early part of the 2000′s he began to develop the research capability that ACM is known for. As part of the portfolio management team, Jeff was an integral part in growing ACM and building the comprehensive research/management services, and then turning that investment research into outstanding investment performance. As part of that research effort, Jeff authored and published numerous in-depth investment reports that ran contrary to established opinion. In the nearly year and a half run-up to the panic in 2008, Jeff analyzed and reported on the deteriorating state of the economy and markets. In early 2009, while conventional wisdom focused on near-perpetual gloom, his next series of reports provided insight into the formative ending process of the economic contraction and a comprehensive review of factors that were leading to the market’s resurrection. In 2012, after the merger between ACM and Alhambra Investment Partners, Jeff came on board Alhambra as Head of Global Investment Research. Currently, Jeff is published nationally at RealClearMarkets, ZeroHedge, Minyanville and Yahoo!Finance. Jeff holds a FINRA Series 65 Investment Advisor License.
Follow
4 Comments
To ensure this doesn’t happen in the future, please enable Javascript and cookies in your browser.
Is this happening to you frequently? Please report it on our feedback forum.
If you have an ad-blocker enabled you may be blocked from proceeding. Please disable your ad-blocker and refresh.