At the end of each year, we always like to take a look at where Wall Street strategists think the S&P 500 is headed over the next year. According to Bloomberg, the consensus S&P 500 price target for the end of 2018 stands at 2,854. That would represent a 2018 gain of roughly 6%.

Typically strategists project a gain of 9.3% for the S&P 500. That's not surprising given that the S&P has historically averaged an annual gain of about that amount. In 2016, Wall Street strategists were spot on with their year-end target, missing the actual mark by just 1.1 percentage points. In 2017, however, strategists severely underestimated things. While they were looking for a gain of 5.5% this year, they undershot the actual mark by roughly 14 percentage points.

Underestimating is something strategists have done for most of this bull market. In the 9 years since 2009, strategists underestimated the actual move 7 times.

Also, notice that since 2000 there hasn't been a year where the consensus year-end price target was negative.

With a price target that suggests a gain of roughly 6% in 2018, strategists are slightly more pessimistic than normal given that their average target over the years has called for a gain of 9.3%. 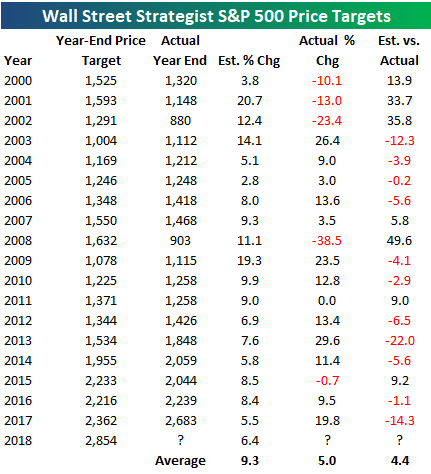 Bespoke Investment Group
44.41K Followers
Bespoke Investment Group provides some of the most original content and intuitive thinking on the Street. Founded by Paul Hickey and Justin Walters, formerly of Birinyi Associates and creators of the acclaimed TickerSense blog, Bespoke offers multiple products that allow anyone, from institutions to the most modest investor, to gain the data and knowledge necessary to make intelligent and profitable investment decisions. Along with running their Think B.I.G. finance blog, Bespoke provides timely investment ideas through its Bespoke Premium (http://bespokepremium.com/) subscription service and also manages money (http://bespokepremium.com/mm) for high net worth individuals. Visit: Bespoke Investment Group (http://bespokeinvest.com/)
Follow
3 Comments
To ensure this doesn’t happen in the future, please enable Javascript and cookies in your browser.
Is this happening to you frequently? Please report it on our feedback forum.
If you have an ad-blocker enabled you may be blocked from proceeding. Please disable your ad-blocker and refresh.