The average stock performance in the Forge River Research Permian Pure Play fourteen-stock universe for the prior week was a strongly positive 9.47% return. This is a 9.07% over-performance versus a market return of a gain of 0.40% (based upon the SPDR S&P 500 Trust ETF (SPY)).

13 of the 14 stocks we track saw share price gains for the week, with an amazing ten showing gains of 10% or greater. The biggest and only loser for the week was Rosehill Resources (ROSE) falling 4.80% for the week. We wrote an article last week on ROSE titled: "Rosehill Resources Guides To 2018 Cash Burn Of $200M+, Completes Delaware Basin Purchase."

For the past 52-week period, our fourteen-stock Permian Pure Play index has underperformed the SPDR S&P 500 Trust ETF by 19.01%, including five stocks that are underperforming by 33% (two over 40%).

See chart below for details of the stock performance of our Forge River Research Permian Pure Play fourteen-stock universe (note, RED is underperformance and GREEN is overperformance versus SPDR S&P 500 Trust ETF). 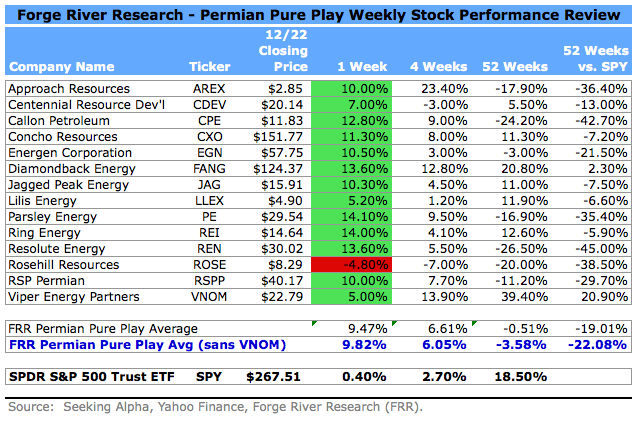 The Brent-WTI spread widened to $6.63 for the week ending December 22, 2017. The increase in U.S. crude oil production in Texas and pipelines bringing crude oil from other areas is putting downward pressure on the WTI crude price. The Forties Pipeline System shutdown is further exacerbating the Brent-WTI spread by pushing up Brent pricing in the near-term.

America oil exports are at new 2017 highs, averaging 1.53 million barrels per day for the past 13-weeks, up more than three-fold since the beginning of 2017. 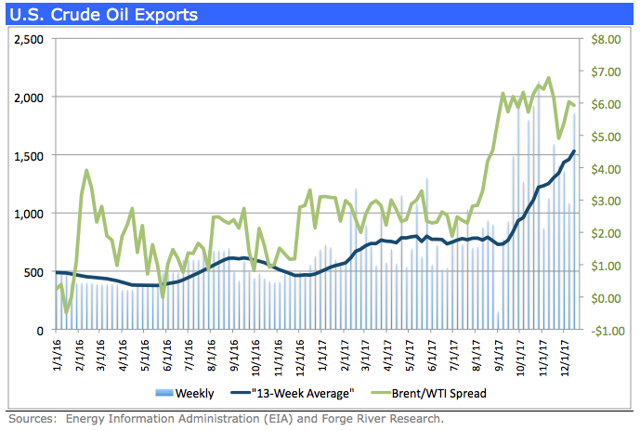 We believe that the Brent-WTI spread and America crude oil exports will be an evolving and continuing story in 2018 and beyond. In its most recent forecast, the Energy Information Administration (EIA) believes that the continued growth in crude oil production from the Permian basin in 2018 will result in a $4.00 Brent-WTI spread (EIA Short-Term Energy Outlook, December 2017). As new crude oil transport and port infrastructure comes online in 2018 and 2019, America crude oil exports should continue to achieve new record levels.

What is true for America crude oil exports is true for natural gas exports as well, on Thursday, December 21, 2017, Kinder Morgan announced a final investment decision on its $1.7 billion Gulf Coast Express Pipeline to bring up to 1.92 billion cubic feet per day of natural gas from the Permian Basin nearly 450 miles to the Texas Gulf Coast.

With the holiday season upon us, most of the companies in our Permian Pure Play Stock Universe were very quiet.

EGN was quiet for the week other than an insider share purchase (see the Insider Activity section below for more information).

FANG continues to see sustained insider selling activity with another $1.86 million in stock sold week, after last week’s sales of $0.70 million (see the Insider Activity section below for more information).

JAG has an insider sale during the week (see the Insider Activity section below for more information).

As part of its November 14, 2017 10-Q filing, LLEX had submitted an application under Rule 24b-2 requesting confidential treatment for information it excluded from the Exhibits to a Form 10-Q. On Friday, December 22, 2017, the confidential treatment order was approved by the Securities and Exchange Commission (SEC) as follows:

Based on representations by Lilis Energy, Inc. that this information qualifies as confidential commercial or financial information under the Freedom of Information Act,5 U.S.C. 552(B) (4), the Division of Corporation Finance has determined not to publicly disclose it. Accordingly, excluded information from Exhibit 10.5 will not be released to the public until August 10, 2027. The exhibit covers a gas gathering, processing and purchase agreement between LLEX (as seller) and Lucid Energy Delaware, LLC (as buyer).

REN saw some insider selling activity during the week (see the Insider Activity section below for more information).

On December 12, 2017, REI held its 2017 Annual Meeting of Stockholders, at which REI’s stockholders voted on the following matters:

As of the record date of November 17, 2017, REI had 54,159,916 shares of common stock outstanding. A total of 46,583,163 shares (86%) were present at the Annual Meeting by proxy or in person. Each of the three proposals (more information available in the Proxy) was approved by REI’s stockholders.

REI granted 296,000 shares (to our count) of restricted stock awards that will vest over five years to directors and management during the week. In addition, there were two significant insider selling transactions by REI’s Chief Financial Officer during the week (see the Insider Activity section below for more information).

On Thursday, December 21, 2017, ROSE issued a press release announcing that it completed the acquisition of an additional 1,940 net acres, certain mineral and royalty interests, and two producing wells, in the Southern Delaware Basin in Pecos County, Texas for $39.0 million ($33 million of which was allocated to the 1,940 net acres). The acreage was purchased under the same terms as the ROSE’s recent, related acquisition of 4,565 net acres in Pecos County.

After the transaction, ROSE’s has a total of 11,150 net acres (over 400 gross Wolfcamp A, Wolfcamp B and Bone Spring locations) with the potential for additional acreage acquisitions from the same seller, under the terms of the agreement which were amended a third time.

We covered the details of the original transaction and our reaction to the news in our article linked earlier in the piece.

Finally, ROSE continued to see very active insider activity including the continued sales by one of its largest shareholders, Geode Diversified Fund (see the Insider Activity section below for more information).

This week we saw some insider selling activity AREX, EGN, FANG, JAG, REI, REN, and ROSE. See details in the chart below. The highlight of the week were the second straight week of substantial AREX insider buying, a positive sign for the company in our view. The insider selling at FANG remains fairly sustained and the REI Chief Financial Officer sold off a very significant 75% of his holdings. 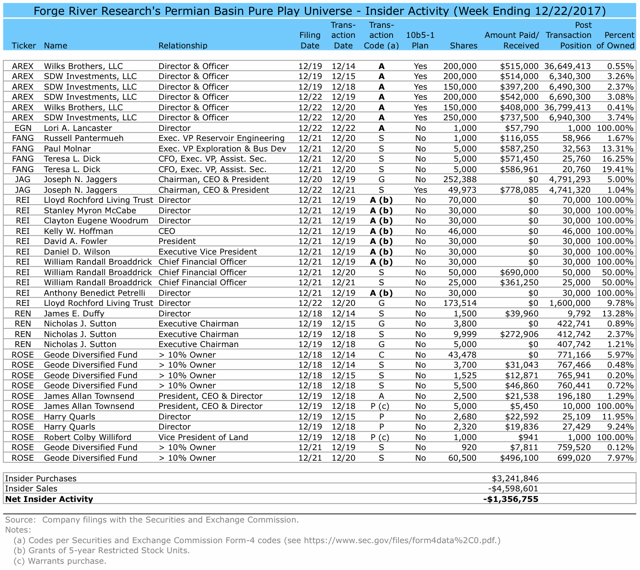 On Friday, December 22, 2017, Baker Hughes reported that the Permian Basin oil rig count increased by 1 rig to 398. Total U.S. oil rigs total 747, no change from the prior week, with the Permian Basin now accounting for 53.28% of the total. 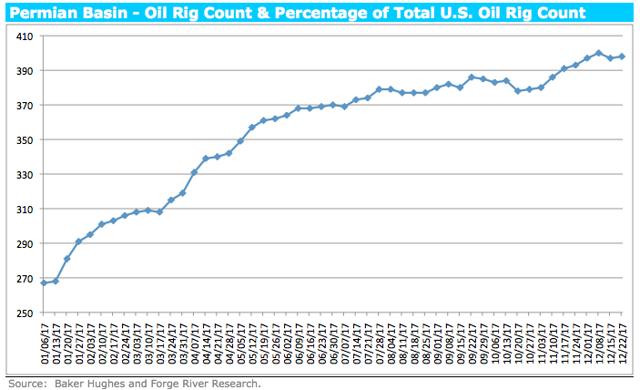 Forge River Research’s Permian Pure Play universe of fourteen stocks saw an average 9.47% increase in share price this week. This pushed EV/EBITDAX to 13.8x, up from 12.6x the prior week (both based on a 3Q17 run rate EBITDAX levels). However, with oil prices rising recently and higher expected production levels, we expect EBITDA levels to increase substantially in 4Q17. 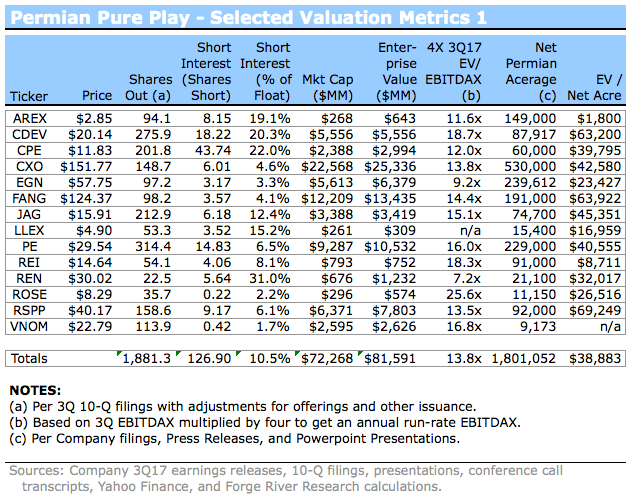 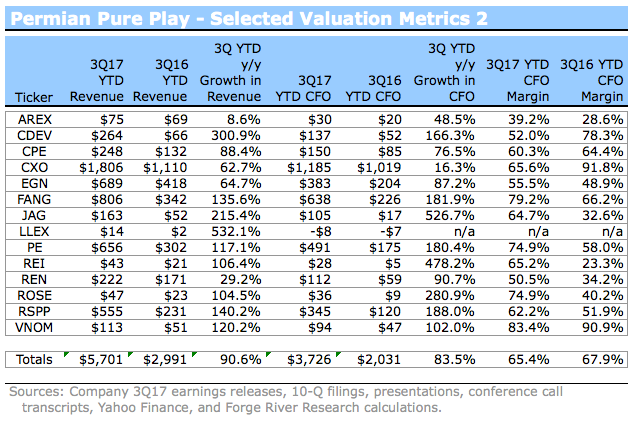 All was quiet on the Permian Basin merger and acquisition front, other then the previously discussed ROSE deal (see above under Company Specific News).

Thank you for reading and please feel free to provide your comments, suggestions, or other feedback.

Also, please check out our prior weeks Permian Pure Play Stocks Weekly for information on the fourteen company in our stock universe for those weeks and other key developments in the Permian Basin: