General Electric (NYSE:GE) is a company that I have closely followed since 2014, and it would be an understatement to say that the stock performance for this storied industrial conglomerate has been a major disappointment in 2017. So far this year, GE shares have underperformed the broader market by 63 percentage points. 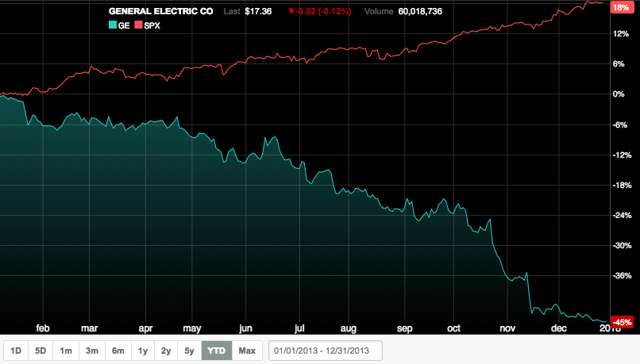 There is no denying the fact that GE's new CEO, Mr. John Flannery, has his hands full as we head into 2018, but, in my opinion, there are three things that management can do to improve investor sentiment over the next 12 months. Therefore, I believe that investors with a time horizon longer than one to three years should seriously consider hanging onto their shares.

To start, investors that expect for GE shares to trade in the lower $30 per share range in 2018 should really take some time to reset their expectations. GE’s stock is trading below $18 per share for legitimate reasons and, while I believe this company is still a great long-term buy at today's price, the next 12-18 months will likely be a bumpy ride.

The dividend cut is coming into play, but GE’s largest operating unit, Power, has been the main source for the recent downward movement in the stock price. Management has heavily relied on this operating unit to meet (or beat) numbers for years now, so it is going to be tough sledding for GE heading into 2018. Expectations for this division have already been reset by Mr. Flannery (read more about the 2018 Investor Meeting here) so we are now at a point where investors should start to bake in expectations for this operating unit to be more of a drag than a tailwind, for at least the next four to five quarters. But it's important to note that Mr. Flannery and team are still bullish on the long-term prospects for this unit.

Let's all be honest about 2018, management will have to positively impact sentiment if it expects for the stock to perform well over the next year. To do this, in my opinion, management will need to change the narrative and show improvements in the following three areas: (1) Cash flow metrics, (2) financial leverage, and (3) margins.

(1) Cash Flow Metrics - It's All About That Cash, Baby

GE's inability to generate sufficient cash has been the number one concern that has been highlighted by the bears, and rightfully so, as the company's operating cash flow for the first nine months of 2017 was down significantly when compared to the prior year. 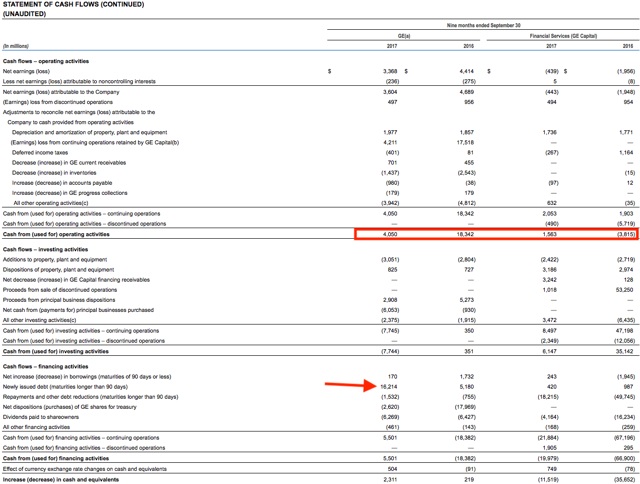 As shown, the company has also issued a lot of debt in 2017. If Mr. Flannery really wants to change the narrative, the company's cash flow metrics should be his main focus. For 2018, management guided for FCF to be in the range of $6B-7B. 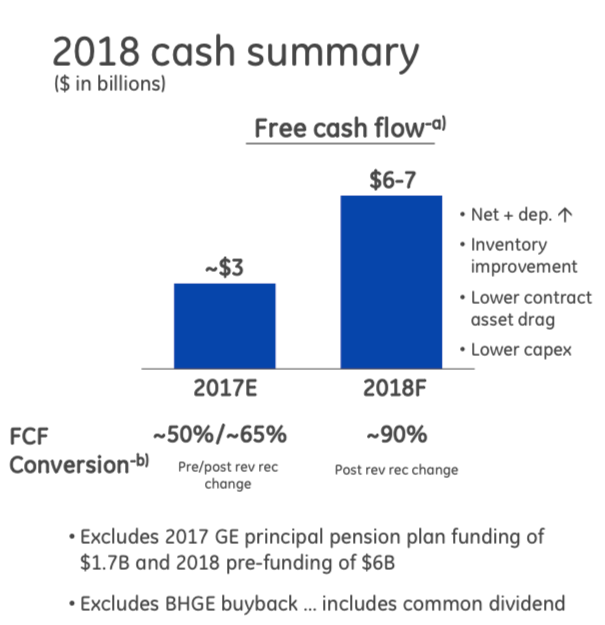 The previously announced dividend cut (from $0.24 to $0.12 on a quarterly basis), along with several other factors, will give GE the opportunity to greatly improve its cash flow prospects in 2018. Another important factor coming into play is the $6B pension contribution that was funded by debt. GE's pension shortfall has been widely covered here on Seeking Alpha so I will not spend much time on this topic, but, at the end of the day, borrowing funds at today's rates to cover pension expenses for the next few years makes sense, at least in mind. Some will say that GE is just kicking the can down the road, but I believe that this analogy could be used for almost any company that has a pension plan.

In 2018, GE's stock price will likely find its footing if management is able to show the market that the company is capable of generating enough cash to cover its business/restructuring expenses and service its large debt load. The cash flow metrics are that important to the bear story. And before we move on, let's take a moment to also consider the fact that GE is sitting on a substantial amount of cash (almost $40B). As such, I do not see cash flows being a significant risk over at least the next two years.

GE’s financial leverage is a highly debated topic and, in my opinion, the bears love to tell a one-sided story. The tagline that "GE is leveraged to its eyeballs" is fun to say, but the comment does not factor in the other side of the ledger (i.e., assets). 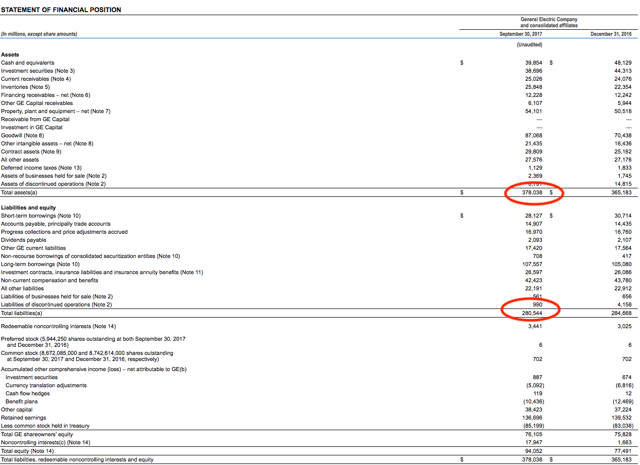 GE definitely has a large debt balance but the company also has a significant amount of assets on its books (~$100B more in assets as of September 30, 2017). You can call into question the quality of GE's assets, i.e. goodwill, but I just want to stress the fact that the roof is not falling like the financial community would have you believe. Plus, looking back, management selling the majority of GE Capital has put this company in a lot better position today than it was a few short years ago.

In 2018, I do not expect for GE to make a significant dent in the debt balance but I would not be surprised if the company was in a position to shift the focus to reducing leverage by early 2019. The wildcard over the next three years is the asset sales - management expects to sell/spin off $20B in assets - because these disposals could potentially allow for management to greatly reduce the debt balance if the market conditions are right.

GE's margins are another hot topic for the bears, as the company has struggled to please the market. 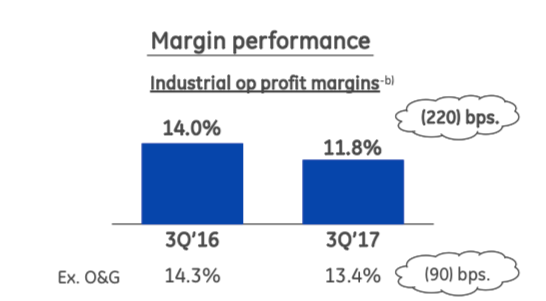 Let's now compare GE's margins to one of its close competitors, Honeywell (HON). 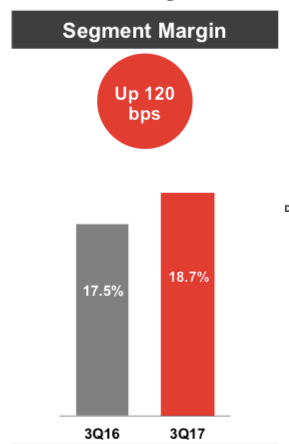 Yes, it is that bad. I definitely consider Honeywell the cream of the crop in the industrial space, as described here, so investors should not be surprised that GE is falling behind as it relates to margins. I do, however, believe that this comparison shows just how far behind GE is when compared to a "great" industrial company.

In 2018, management expects to cut out structural costs by focusing on the digital push and streamlining operations. As of November 2017, management expects to eliminate ~$3B in structural costs through 2018. Mr. Flannery has his work cut out for him and by no means should investors expect for margins to be significantly higher in 2018, but, in my opinion, the only way to go is up. If not, I will have to re-evaluate my investment thesis.

GE is contending with several stiff headwinds but, on the other hand, this company still has some great businesses that have promising business prospects (i.e., Aviation, Renewables, and Healthcare). Putting politics aside, the tax reform bill that lowered the corporate tax rate to 21% will most likely turn out to be a significant tailwind for GE. 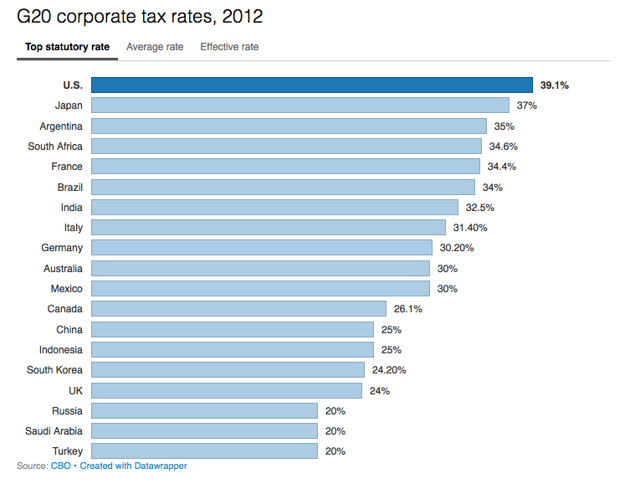 As I previously described, a business-friendly change in the corporate tax rate goes beyond just GE's tax bill because an improving environment is good for both GE and its customers. Moreover, I tend to agree with others that believe that repatriating overseas funds may actually turn out to be a short-term headwind for GE (i.e., the immediate tax bill) but it is hard to deny the potential long-term benefits of a lower corporate rate/bringing home foreign profits. This bill will help the economy, of course, in my opinion, and it will give companies the opportunity to reinvest in their businesses, which are both positives for large industrial companies like GE. There are real risks with investing in GE, even at today's price, but investors should be encouraged by the prospects of a business environment that appears to be improving by the day.

Management guided for adjusted EPS - as defined as continuing EPS ex. gains, restructuring, and non-operating pension - to be in the range of $1.00-1.07 for 2018, which makes the forward P/E ratio ~17 based on the low end of the range. My 12-month price target is $19 and this does not even factor in the improving environment for Baker Hughes, a GE Company (BHGE) or the potential benefits of the asset sales, which both could be significant catalysts for the stock.

The main risk for investing in General Electric starts with management. There is no guarantee that Mr. Flannery is the right man to turn around a company that is widely viewed as a directionless, complex industrial conglomerate. Sentiment is the number one factor for GE shares being down by almost 50% in 2017 so shareholders are putting a lot of faith in a largely unproven leader, at least on this type of stage.

There will more than likely be additional downward pressure for GE's stock in the months ahead but the company's story looks better the further that you look out. Think about this, GE sells/spins off the low margin businesses - Transportation, Lighting, and other misc. units - in 2018/2019 and management makes the necessary changes within the Power unit during this same period of time. By mid-2019, you will be holding a simpler, more predictable industrial conglomerate that has three main divisions - Aviation, Healthcare, and Power - that have great long-term business prospects. Is uncertainty involved? Yes.

Investing in GE today is risky and there will be a lot of moving pieces to factor in through 2018 in, but, in my opinion, GE shares are attractively valued if you are willing (and able) to hold onto your position for the next three to five years. Therefore, long-term investors should consider significant pullbacks as buying opportunities.

Author's Note: General Electric is a top-2 holding in the R.I.P. portfolio, and I have no plans to reduce my stake in the near future.

Disclaimer: This article is not a recommendation to buy or sell any stock mentioned. These are only my personal opinions. Every investor must do his/her own due diligence before making any investment decision.

If you found this article to be informative and would like to hear more about this company, or any other company that I analyze, please consider hitting the "Follow" button above. Or, consider joining the Going Long With W.G. premium service to get exclusive content and one-on-one interaction with William J. Block, President and Chief Investment Officer, W.G. Investment Research LLC.

WG Investment Research
8.34K Followers
Our President and CIO is a CPA with experience in public accounting and the financial services industry. He earned his Master of Accountancy degree in 2008 and his B.S. in Business Management in 2007. He is also a Level III CFA candidate. He has been intrigued by the market from the start. Over the years, he has learned that long-term investing is a discipline that, if followed, will help contribute to building lasting wealth. As such, most of our articles will be about the investments that we plan to hold for at least 3 to 5 years, as long as the company's story does not change. As a Seeking Alpha contributor, our main goal is to write about the companies that are key to our portfolio with the hope of promoting discussion (for or against the investment) from others within the SA community.Please visit our website for more information about W.G. Investment Research LLC.

Disclosure: I am/we are long GE, BHGE, HON. I wrote this article myself, and it expresses my own opinions. I am not receiving compensation for it (other than from Seeking Alpha). I have no business relationship with any company whose stock is mentioned in this article.