Here are the price returns in table form, including both price and dividend reinvested numbers:

And here are the dividend reinvested returns again for both:

(We source our numbers from MarketWatch - as we went to press, the dividend reinvested numbers matched for both dates.)

Whichever date you choose, we can't improve our favorite message: dividends matter. Although 25% or 28% are both huge returns, the 28% number is the most accurate to quote. You simply can't ignore the effect of dividends on stock market returns, and it's surprising how commonly this simple math is neglected.

Investing in a Price-Weighted Stock Index like the Dow

As compared to other popular indices which are weighted by company market capitalization (e.g., see the 2017 S&P 500 Return), the Dow Jones Industrial Average is a price-weighted index. Price-weighted indices derive their actual trading prices by the trading price of the underlying company shares, which are each multiplied by some factor. Price weighting isn't a good method of creating indices, even though it was an excellent invention for its time.

Setting aside matters of construction, the Dow Jones is still an extremely popular index. Consisting of 30 of the top companies in America and representing most industries, Dow Jones volatility can drive financial news like no other index. Those 30 companies are among the largest in America - consequently, the DJIA pays out more dividends than most other indices.

It's possible to invest in an ETF that tracks the Dow Jones Industrial Average. DIA is the most popular Dow Jones ETF. There are a few quality mutual funds as well.

Data is from the Dow Jones Industrial Average Total Return Index, from S&P Dow Jones Indices. The chart is from MarketWatch.

Here's the Dow Jones Industrial Average return chart for 2017 for price performance and with dividends reinvested. 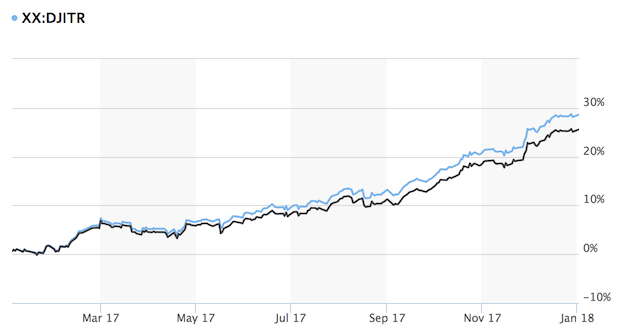 2017 was an epic year for the Dow Jones Industrial Average. It was in the top 22% of the set of all rolling 12-month returns on the Dow.

As we always say, though, your mileage may vary. Varied effects from taxes, slippage, timing, fees, availability and other factors would change the exact number you see. However, if you reinvested your DJIA dividends - or even if you threw them away - you had a great year.

Follow Don't Quit Your Day Job and get email alerts
+
Add a comment
Disagree with this article? Submit your own.
To report a factual error in this article, click here.
Your feedback matters to us!