The analysis of International Subsidiaries, or simply Foreign Companies, introduces important research considerations that are incremental to the straight evaluation of domestic (US based) business operations. We will discuss three of these important considerations here:

At the risk of stating the obvious, not all countries are equal when it comes to shareholder rights, security of assets, the cost of doing business, or just the ability to sustain business operations. That these items, or changes in the status of these items, affect the economic value of a foreign company or foreign subsidiary shouldn't be surprising.

Consider the story of Eldorado Gold (EGO), an established Canadian gold miner. Beginning in 2012, the company acquired and invested in developing a trio of Greek mines (Skouries, Olympias, and Stratoni), spending several billion dollars. Despite receiving initial environmental approvals, the company has been at odds with the Greek government and local communities, ultimately resulting in permit delays and arbitration hearings. The delays have obviously raised concerns about whether the value of these assets will ever be realized. Shareholders of Eldorado have endured a long period of suffering, as the estimated fair value of these projects dwindles.

Q: What resource(s) can help in my assessment of a country's business operating climate?

A: One resource is the World Bank's "Ease of Doing Business Index", published annually. The index provides an overall country rank, which Wikipedia describes as an indication of "better, usually simpler, regulations for businesses and stronger protections of property rights".

Further, the actual index is broken down into several categories, namely:

For minority shareholders of publicly traded corporations, the items listed in bold might be of elevated importance.

As many investors have found out the hard way, China doesn't rank very high in terms of "Protecting Minority Shareholders". New Zealand ranks #1 overall in the Ease of Doing Business Index, while the United States ranks #6. Also of note is that in 2017 India made the biggest jump in the Ease of Business rankings.

Another resource is The Heritage Foundation's Index of Economic Freedom. Countries are similarly ranked on criteria such as i) The Rule of Law, ii) Regulatory Efficiency, and iii) level of Open Markets.

Q: How can I incorporate this information into my thesis and/or price target for a company?

A: In a most simple form, apply a discount to the otherwise neutral value of a company's foreign assets. A discount could be in the form of a higher discount rate in performing a DCF (Discounted Cash Flow) analysis on a foreign asset of subsidiary, or a direct discount to your target share price. The higher the assumed risk, the higher the discount.

Currency movements can have significant impacts on the profitability and economic value of a company or business. Often currency effects feature multiple moving parts, so it's important to take the time to think through all parts of the currency exposure.

One of the most common errors investors make when thinking about currency impacts is forgetting when exposures offset eachother. Consider a U.S. Investor's possible investment in TD Bank (TD), which is of course a Canadian company. In addition to the U.S. stock listing, a U.S. investor may also be able to access TD's listing on the Toronto Stock Exchange. Let's assume that the Canadian Dollar is weaker than the U.S. Dollar by 25% (USDCAD = 1.2500), and the following stock prices of:

If you think that the Canadian Dollar will appreciate in value against the Greenback, should you invest in the Toronto Stock Exchange listing of TD Bank (instead of the NYSE listing) and benefit from gaining Canadian Dollar exposure?

The answer, surprisingly, is that it doesn't matter. Assume that over your holding period that the Canadian listing of TD remains at a price of CAD$75, but that the Canadian Dollar appreciates to USDCAD $1.10.

So even though the stock price of TD.TO stayed flat, a US investor was able to make a profit by converting USD$60 to CAD$75 at the time of investment, and then converting CAD$75 back to USD$68.18 for a USD profit of 13.6%. Effectively, the investor profited from a strengthening Canadian Dollar.

However, in fact the investor would have profited equally had he just bought the NYSE shares of TD. Interlisted stock prices will always move in equilibrium based on the current exchange rate. Even if the investor in TD had bought the shares on the NYSE at USD$60, these shares would have risen to the same USD$68.18 value at the end of the holding period, based on the ending exchange rate of USDCAD = 1.10. At this exchange rate, the TD.TO stock price of CAD$75 translate to a TD.NYSE stock price of USD$68.18, the very same value as if the US Investor had converted USD to CAD at the onset of the investment, and then CAD back to USD at the end.

Q: This isn't a personal investing newsletter, so what's the lesson for a stock analyst here?

A: The lesson is that having stock listings (of the same company) in different countries/currencies doesn't create currency exposure. The real currency exposure of an investment is based only on a company's underlying currency exposure. For TD bank, which operates a U.S. subsidiary (dubbed America's Most Convenient Bank), approximately 30% of Net Income comes from U.S. earnings. Essentially this means that no matter where an investor buys TD bank stock, this investment will currently be exposed to ~70% CAD, and ~30% USD (ignoring any FX hedge book that TD operates).

If the USD strengthens (at least versus the South African Rand) that should be a positive for a South African platinum miner operationally. Platinum (as with most commodities) is priced and sold in USD. So a stronger USD means higher revenue (all else equal) per ounce of platinum, once converted back to Rand. The miner's operating costs (ie - labour) are likely mostly denominated in Rand. So effectively a strengthening USD will bring in higher revenue in Rand, while operating costs will remain at their existing Rand level, making a net positive for this company (in Rand) operationally.

It's worth taking this one step further. The stronger USD will cause the miner's profits to increase in Rand terms, and therefore the stock price will likely increase on the Johannesburg exchange. However, translating this stock price to USD (for a U.S. Investor) will erode at least some of the gains, given that the USD has strengthened against the Rand.

Extending the previous example, perhaps this platinum miner has a high level of USD-denominated debt. If so, a stronger USD will make this debt more burdensome in local currency terms. USD Interest payments will also be higher in Rand terms. Depending on the level of debt and the interest rate on this debt, this negative currency impact might more than offset the operational benefits the miner experiences from a stronger USD.

Before broaching the topic of taxation of international companies and international subsidiaries, it's important to note that taxation issues can be incredibly complicated. Two companies who may appear to be similar in nature and in geographic exposure might have very different tax concerns.

This discussion is intended to present the basic nature of international taxation, for those who are less familiar with this tax treatment.

The underlying principle behind taxation of non-U.S. business profits is equivalence. United States tax law seeks to treat foreign profits just as if those profits were earned domestically. Some additional key elements are:

Let's look a hypothetical example (all amounts in USD equivalent): 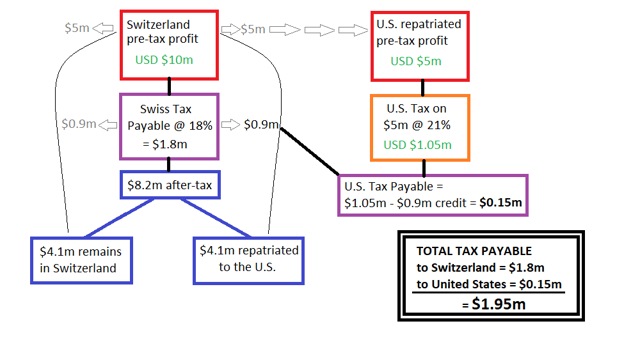 In considering the above hypothetical example, and the 3% tax differential between the U.S. (21%) and Swiss (18%) corporate tax rates, it becomes obvious how much of a game change the new U.S. tax legislation is for repatriation of foreign profits. Under the previous tax scheme, the tax rate differential between the U.S. and Switzerland would have been 17% (35% versus 18%). Under this old scheme, the amount of incremental tax ABC Corp. would have had to pay the U.S. government would have been $1.75m instead of just $150,000.

When analyzing and valuing a company's foreign business operations, it is too easy to take a neutral stance on important international considerations. Especially for firms with a large proportion of international operations, elements such as Country Governance Risks, Foreign Currency Considerations, and Foreign Profits Taxation, can easily make or break a thesis.

SA Editor Jeffrey Fischer
91 Followers
Jeffrey Fischer serves as Managing Editor - Editorial Policy. For the previous 8 years he served as a Seeking Alpha PRO Editor. Jeff has worked in the financial/investment industry for 20+ years. Prior to joining Seeking Alpha, he was a Treasury Manager for a large commodities firm, where he managed financial liquidity, currency risk hedge portfolios, and investment arbitrage trades. Jeff has also worked in financial performance analytics, trading, and banking. Jeff has a healthy interest in behavioural finance, and loves a good investment "story" at least as much as a valuation analysis. Jeff completed the requirements of the CFA Charter in 2003, but is not an active member of the CFA Institute.
Follow
1 Comment
To ensure this doesn’t happen in the future, please enable Javascript and cookies in your browser.
Is this happening to you frequently? Please report it on our feedback forum.
If you have an ad-blocker enabled you may be blocked from proceeding. Please disable your ad-blocker and refresh.