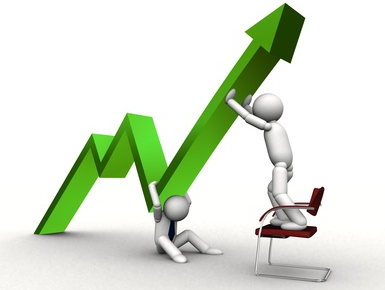 CNBC is the business news station that I tend to watch during the trading day, and they spent quite a bit of time examining the marijuana and cannabis sector this last week. After the remarks made by U.S. Attorney General Jeff Sessions, they provided increased coverage, focusing on stocks reacting negatively to the news release.

I produced this SA Instablog with links and names for a list of State Attorneys General in U.S. states where recreational marijuana has already been decriminalized. I do not repeat this list or these links in this article, but you can use the hyperlink to examine them and draw your own conclusions. I am not concerned and do not believe that any of these states will use the Jeff Sessions remarks to alter existing, decriminalized policies in their states.

This last week was not the first time Jeff Sessions put a stop to a marijuana sector rally. See this Seeking Alpha article, where I credit him with the early 2017 decline in the marijuana or cannabis sector, and provided the following:

The comment from this last week is far less aggressive (see above). There is a big difference between “White House may boost…enforcement” (February 2017) and “let state attorneys decide” (January 2018).

They are respecting state rights, which is a theme Trump touted during the presidential election. Therefore, I view the most recent statement as FAVORABLE for the marijuana or cannabis sector.

Note the detectable impact that the Jeff Sessions statement had on the Horizons Marijuana Life Sciences Index ETF (HMLSF) (see red arrow and red volume indicator in the below chart). 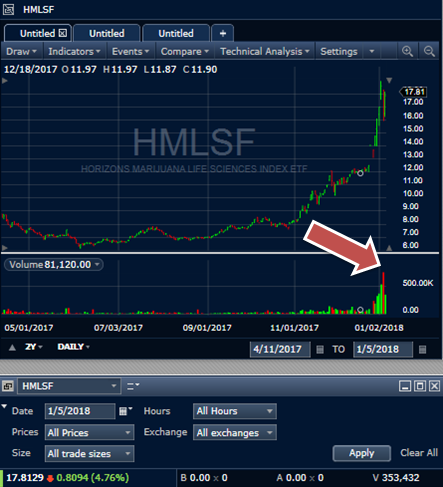 Note that a recovery is already in progress (see green volume indicator in the above chart).

I like the Canadian exposure, which has not changed since my last Seeking Alpha article: 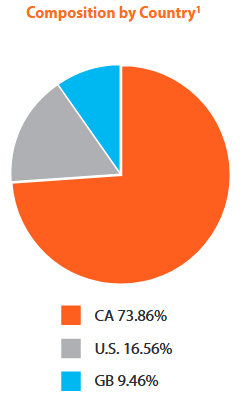 Canadian tickers have also not changed, and are listed below: 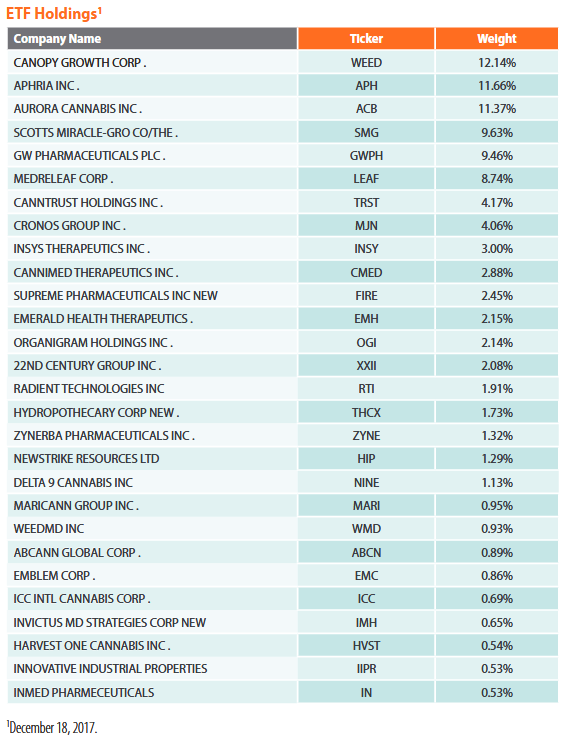 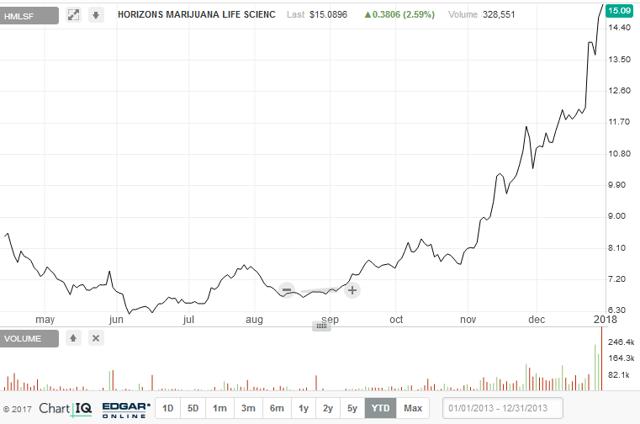 My Equal-Weighted Portfolio of, Now, N=259 Marijuana or Cannabis Stocks

First, I should thank my followers for recommending additions to my portfolio. I hope I caught all of them in the comments section of my last Seeking Alpha article, but, if not, let me know if others should be added. My methodology for the portfolio is in APPENDIX A.

I computed the Horizons Marijuana Life Sciences Index ETF (N=28) on equal-weighted [EW] portfolio basis at 4.12% for January 5. It is, of course, a value-weighted index, and actually rose 4.76% for January 5.

It made a nice, partial recovery after the Jeff Sessions comments and continues to trade near its all-time high of $18.96 (see below): 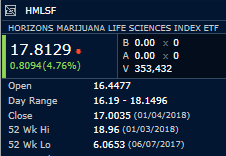 I separately computed ETF and non-ETF returns for the first week of January 2018 (see APPENDIX C).

Some Comparisons between the ETF and Major Indexes

Below is a comparison of [1] the Horizons Marijuana Life Sciences Index ETF [HMLSF] to [2] the Dow Jones Industrial Average [DJIA], [3] the NASDAQ, and [4] the S&P500. I use monthly measures beginning on April 1, 2017, which is when the ETF began trading on the Grey market. The data I used to create this chart in contained in APPENDIX B. 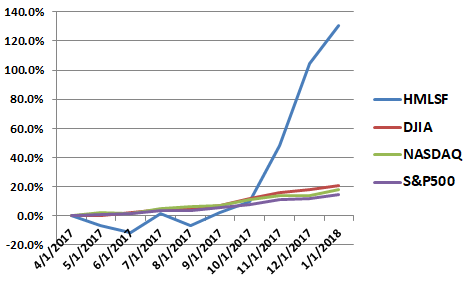 Some are having trouble trading this ETF through their broker. I maintain 2 separate brokerage accounts to avoid these issues, as I have had problems of this sort, in the past, with other stocks and it has cost me money in lost profits.

It would appear that the world economy is “off to the races.” I am approaching a semi-retirement stage, so I am taking money off the table. I still maintain some “play dough.”

If the economy heats up and the Federal Reserve increases interest rates and inflation stays low, in the short run, I see an opportunity to do the following:

1. remain or increase my debt position with a low interest rate, long-term fixed mortgage, in anticipation of future inflation;

2. rotate out of riskier equity securities before Federal Reserve interest rate increases lead others to select safer, debt instruments with relatively higher rates of return and a more attractive alternative to returns on equity alternatives; and

In brief, I am feeling pretty warm and fuzzy these days, and hope you are, as well, as we all consider options and alternatives for long-term, profitable investments.

APPENDIX A: Methodology for my Portfolio of N=254 Marijuana or Cannabis Stocks

I did receive one concern about my list of marijuana or cannabis stocks, so I will provide the alternatives I was faced with and the decision I made and why:

Alternative 1 is to maximize the population or universe of marijuana or cannabis stocks in my equal-weighted index or portfolio. This is the alternative I have selected. When a Seeking Alpha comment recommends that I add a stock to the population I [1] investigate support in the form of a press release or news item, [2] include the stock and ticker if there is evidence to support inclusion, and [3] never remove the stock or ticker from the population.

Alternative 2 is Alternative 1, but I could delete stocks and tickers when I determine that the firm is not really in the marijuana or cannabis sector. I do not do this. In order to do this, I would have to develop an algorithm and this would please no one. It would introduce subjectivity and bias. I prefer a slight error term to the alternative of subjectivity and bias. I suspect most social scientists would agree, but if someone disagrees, they can copy\paste the list I provide into an Excel file and use their own algorithm to delete stocks or tickers.

Alternative 3 is to focus only on the big caps or Canadian stocks or narrow my focus in some other fashion. Others are doing this, so I am providing for an alternative to perspectives already available in the market.

NOTE: The concern expressed by one person commenting was that I included some stocks and tickers that might have been involved in a past pump and dump scheme and were not really in the marijuana or cannabis sector. This is a legitimate concern, but, as addressed in Alternative 2, above, I will let the reader decide which to eliminate. I can say with near certainty that were I to use such a methodological approach in an article submitted to an academic journal, all reviewers and the editor would reject the article and or introduce bias with respect to their own, personal preference for the “correct” methodology for stock or ticker symbol elimination to be used. And given an infinite number of algorithms, none would agree.

APPENDIX B: The Excel Data I Used for the Comparison Line Graphic 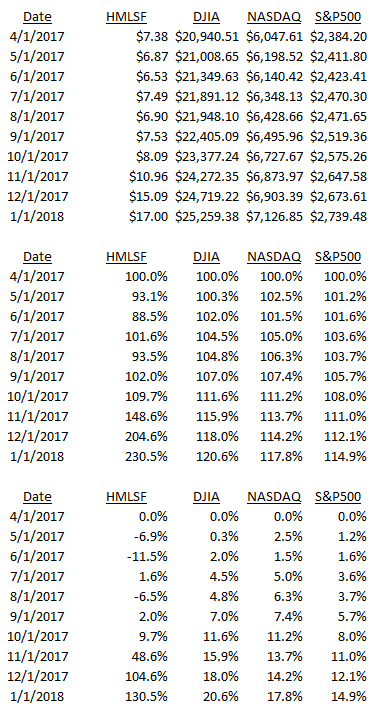 APPENDIX C: The N=259 Population of Marijuana or Cannabis Stocks

Anthony Cataldo
7.03K Followers
Full name for licenses is Anthony Joseph ("A.J.") Cataldo II.  Retired university accounting professor, CPA, CMA, CGMA and author of 10 books and 200+ articles and columns in 50+ different journals and outlets, with experience as CFO, Government Auditor, Public Accountant and Litigation Support Expert Witness in cases involving GM, Ford, and other big cap firms.  Years ago, the Securities and Exchange Commission used 3 of my research articles in a fraud case.  I have taught at 10 universities including Northeastern & UCBerkeley (online and during Covid).Paige Whiteside is my niece, a Master's of Finance student at the University of Arizona, with an undergraduate degree from Arizona State University, and I have encouraged her to submit some articles to Seeking Alpha for publication consideration.  We will not be covering the same stocks or securities, we will not be commenting on each other's content, and, as required by Seeking Alpha, and appropriately so, I am disclosing this association/relation in my profile bio.
Follow

200 Comments
To ensure this doesn’t happen in the future, please enable Javascript and cookies in your browser.
Is this happening to you frequently? Please report it on our feedback forum.
If you have an ad-blocker enabled you may be blocked from proceeding. Please disable your ad-blocker and refresh.