Since his appointment as a CEO of BlackBerry (NYSE:BB) in 2013, John Chen started a wide reorganization of the company, goal of which was to make sure that the business will stay afloat and will be able to avoid bankruptcy, after the previous management failed to adapt to the changing market environment and nearly destroyed the company. Over the last couple of years, BlackBerry has gone through periods of struggle and defeat, as its market share continued to shrink, and investors started to lose confidence in the business's ability to create shareholder value. However, two major things that BlackBerry was able to accomplish was to exit the hardware business by licensing new phone productions to the Chinese manufacturer TCL and focusing more on the software side of the business, which is now the major catalyst of growth for the company.

Throughout all of 2017, BlackBerry's stock slowly started to recover from its all-time lows, as the licensing deal with TCL was considered a success, and the announcement of the new deals in the security and automation sectors showed that there is still a lot of value to unlock, as the management announced numerous partnerships with the companies like Qualcomm (QCOM), Tata (TTM), Baidu (BIDU), and others.

The recent earnings reports suggest that BlackBerry starts to slowly recover from the turbulent times, as in the last two quarters, it beat analysts' revenue estimates, and its earnings per share continue to outperform expectations. As the stock is trading around its 52-week high, there is every chance that its price might go up higher the foreseeable future. 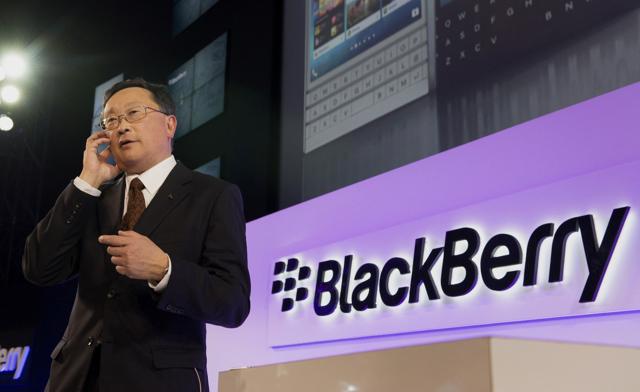 While the majority of our portfolio consists of short positions, we view BlackBerry as a perfect hedge to our bearish positions from the tech field. That's why just before the New Year, we have opened a long position in the company, as we believe that there are a lot of upsides to its stock.

While BlackBerry's past financial performance is not as good as we want it to be, we created a DCF model, where we forecasted the company's future performance based on the past data and came out with a table that estimates the growth of BlackBerry's major metrics.

(Update 1/22/2018: This article has been updated to clarify the thought process around the DCF model.)

As you could see from the table, the revenue in our model is forecasted for the next 10 years and it will take time for BlackBerry to start making considerable profits. It’s true that our revenue expectations for the current full fiscal year are somewhat higher than what the company projects to make, but the whole point of the DCF model is to make the results of the terminal year close to being realistic. That’s why the terminal growth rate in our model is only 1% and there is a decline in the growth of revenue in the following years. Because of that, our model becomes more balanced and is close to the reality. Also, we believe that in 2024, investors will see a positive net profit in the company's income statement, but before that time, it's highly unlikely that investors will see any gains, as the business's operation costs are still high, and its margin is still too small to fully cover those expenses.

On a positive note, BlackBerry's weighted average cost of capital is 8.6%, where the cost of equity is 9%, and the cost of debt is 5%. WACC in the model is lower in comparison with other companies for which we create DCF models, as BlackBerry has numerous governmental contracts in different countries, and the demand for its products will continue to rise, as internet security starts to play a greater role in transnational affairs between governments, companies, and institutions.

Consolidating all of the numbers from our table, our DCF model showed that the intrinsic value of BlackBerry stock is $16.62 per share, which is an upside of more than 20% from the current market price. 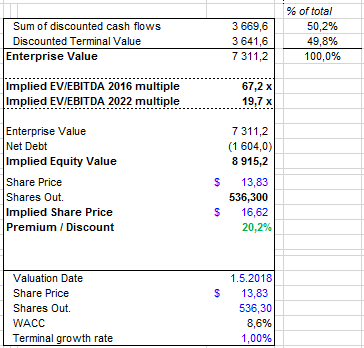 After that, we created another table, where we compared BlackBerry to its peers from the mobile and software sectors. Unfortunately, due to its unprofitability, we could not calculate a lot of multiples for its metrics such as EBIT or EBITDA Margin, and thereby, the comparable analysis showed the fair value of BlackBerry stock to be $6.80 per share, or a downside of around 50% from the current price.

While the comparable analysis doesn't show a real picture of the company, it gives a good understanding of how strong it is on the market. To understand the full value and the potential of BlackBerry, we decided to consolidate our findings from the DCF model and the comparable analysis and see how much the company is really worth. Below are the two columns that describe how we calculated BlackBerry's intrinsic value, and from it, you could see that we came to a conclusion that the final fair value of the company is $14.17 per share, which represents an upside of 2% to 3% from the current market price. 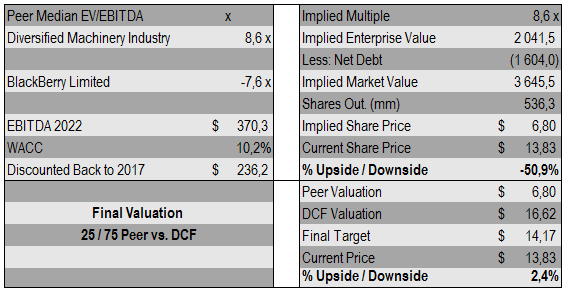 Looking at the numbers and analyzing the company's financial and business performance, we believe that BlackBerry is soon going to become a stable company that it was once before. The recent earnings report shows that the company is making a lot of progress in terms of cutting its expenses and making new deals, but there is still a lot of work to do for the management, if it wants to return to the pre-2013 levels, when BlackBerry had more resources to compete with others. As for now, we believe that BlackBerry trades around its fair value and see no reason for its share price to go further down. We will continue to hold a long position in BlackBerry for a considerable amount of time and will use it mainly as a hedge to our overall bearish portfolio.

Bears of Wall Street is a community of traders and financial analysts, who take a pragmatic approach to valuing companies. The majority of our articles have bearish sentiment and reflect our short stance on the market. Our investments include short sales of common stock. If you liked our writing style and our view on the market – don’t forget to subscribe. If you have questions – feel free to ask them via direct messaging or through the comment section.

Disclosure: I am/we are long BB. I wrote this article myself, and it expresses my own opinions. I am not receiving compensation for it (other than from Seeking Alpha). I have no business relationship with any company whose stock is mentioned in this article.