Sunday marked my 50th wedding anniversary, so I tend to notice events that happen on January 14. It was on that date in the year 2000 that the Dow Jones Industrials peaked at 11,722.98, a number that would not be eclipsed for nearly seven years. That Friday, January 14, 2000 was a giddy time for big stocks on Wall Street, as Glaxo-Wellcome offered to acquire SmithKlineBeecham for $75.7 billion in stock. Earlier that week, AOL announced plans to acquire Time Warner for roughly $182 billion in stock and debt. Both deals took until December to complete due to legal hurdles and the sinking stock market later that year.

The last eight years amount to a payback - a reversion to the mean - for the crappy returns of the years 2000-09, which amounted to the worst real (after-inflation) returns of any decade in market history, so beware of any Cassandra who only measures a market from its most recent lows. They aren't telling you the whole truth. They aren't accepting the totality of market history - "for better or worse, for richer or poorer, in sickness and health" as the marriage vow puts it. We are now enjoying the payoff for our pains.

In the 14 months since election day, this market has been supercharged, by whatever measure: 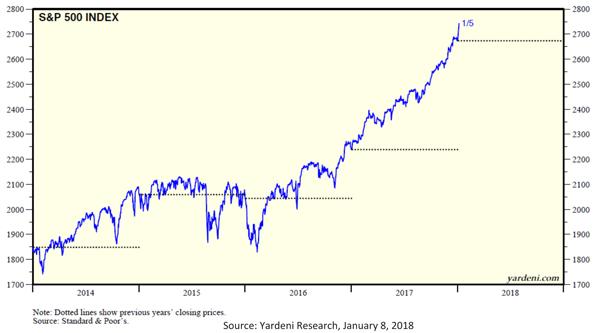 If you watched the evening news, you would not believe this market could possibly rise, given the onslaught of bad news and the war of words between the President and the national press - but it is.

Forget the Psycho-Babble, Focus on the Facts

The stock market isn't the only soaring indicator. A lot of journalists talk about the sour mood in the country or unprecedented dissension in Washington DC, but those are just words. Whenever polls are taken among real people - especially investors and business owners - we find entirely different results.

First off, the economic indicators seemed to turn on a dime after the 2016 election results. For instance:

The psychological components of the economy - optimism and sentiment - are also rising rapidly. Economist John Maynard Keynes called these our "animal spirits." After Trump's surprise win, our animal spirits went from a sleep-walking "more of the same" depression (under the expected leadership of Hillary Clinton) to a somewhat-unsettling but eventually more hopeful Trump era. Almost all surveys of consumer and business confidence began to soar in late 2016 and then kept rising, especially in late 2017.

The Consumer Optimism Index (COI), an average of the Consumer Sentiment Index and Consumer Confidence Index rose from 105.8 at year-end 2016 to 109.0 at year-end 2017. The "current conditions" component of the COI just peaked at 135.2, its highest level since March of 2001. The number of respondents saying that "jobs are hard to get" fell to 15.2% last month, the lowest level since July 2001.

The National Federation of Independent Businesses (NFIB) Small Business Optimism Index averaged 104.8 in 2017, its highest reading for any year in the history of the survey. In December 2015, the main concern of small business owners was government regulation, at 21.2%. As of the end of 2017, regulation concerns had fallen to third place, at 15.7%. Now, a shocking 54% report that there are few or no qualified applicants for job openings, the highest in the history of that series, dating back to 1993. 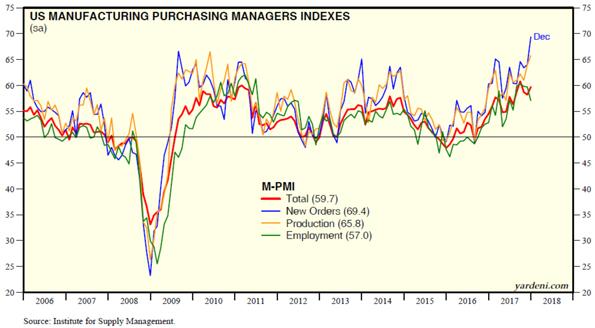 These are measurable levels of sentiment, not fuzzy levels of opinion or political psycho-babble. They tell us that most business owners and investors hold out great hopes for the Trump economic agenda. When inundated with political opinion to the contrary, try to tune out the noise and focus on the provable facts.

Follow Louis Navellier and get email alerts
+
Add a comment
Disagree with this article? Submit your own.
To report a factual error in this article, click here.
Your feedback matters to us!