Currently, one of the most stunning indications of the overbought conditions in the stock market is the record levels of the monthly relative strength index (RSI). For the Dow Jones Industrial average, the monthly RSI is higher than it has ever been in the past 100 years: 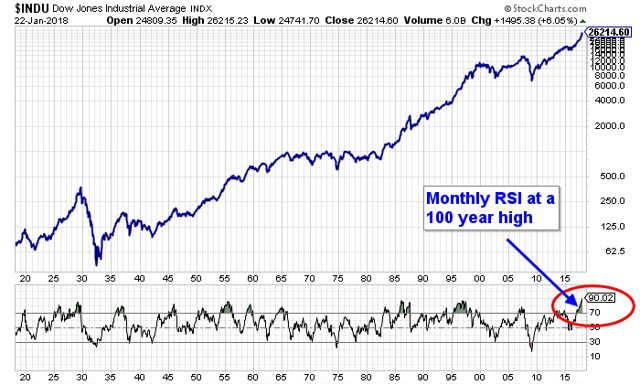 A similar plot of the S&P 500 going back as far as 1925 also reveals near record levels for the monthly RSI: 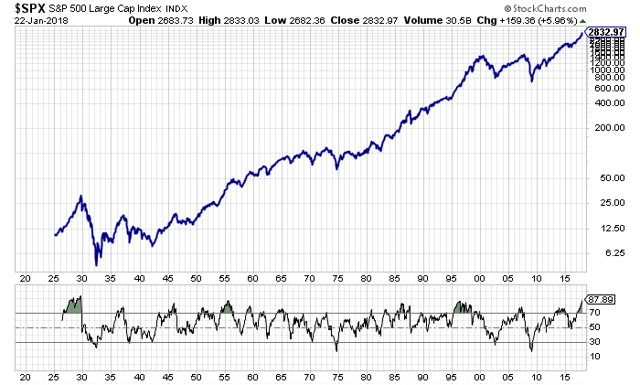 The high RSI value indicates strong upward price momentum and overbought conditions. Similarly high RSI values were observed in the months leading up to all major market crashes, including the Black Tuesday crash of 1929, the Black Monday crash of 1987, the popping of the tech bubble in 2000, and the 2008 crash following the great financial crisis.

What is the RSI and how good of a predictor is it?

The RSI is a widely used technical indicator originally proposed by J. W. Wilder in the book New Concepts in Technical Trading Systems, published in 1978. The value of the RSI provides information on the direction and magnitude of price movements. The RSI varies from 0 to 100, with values below 50 indicating prices declining and values above 50 indicating prices increasing. The RSI is based only on price versus time, so it does not take into account numerous other important factors affecting stock prices. Even though the RSI is based on very limited information, it has proven very valuable as a tool to indicate overbought and oversold market conditions.

To determine the RSI value from a given time series of closing prices (hourly, daily, weekly, monthly, etc.), the relative strength (RS) is first calculated from:

If the closing price were to decline for 14 consecutive trading periods, there would be zero gains and the lowest possible RS value of zero would be calculated. At the other extreme, if the closing price increases for 14 consecutive trading periods, the average loss would be zero and the maximum possible RS value of infinity would be calculated. Rather than have a technical indicator that ranged from zero to infinity, Wilder defined the RSI to range from 0 to 100:

Using the values of the inflation adjusted values of the S&P composite provided by Prof. Robert Shiller of Yale University, I have plotted monthly S&P composite levels on a log scale for the past 100 years with overbought and oversold months highlighted: 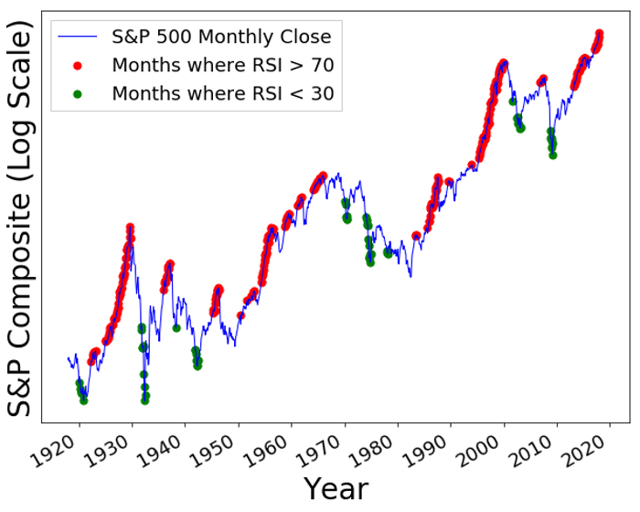 Months in which the RSI was greater than 70 are highlighted with red circles, and months in which the RSI was less than 30 are highlighted with green circles. The above chart shows that the high RSI value is definitely a warning sign for a market crash, but it cannot be counted on to predict a market top. The RSI was overbought immediately before all major market crashes, including black Tuesday in 1929, black Monday in 1987, the popping of the technology bubble in 2000, and the crash following the financial crisis in 2008. However, the plot also shows that the RSI can remain at overbought levels for years, even decades, before major declines in the stock market. If you were to sell at the first sign of an overbought RSI level, you would miss out on some of the largest gains in previous bull markets.

The current monthly RSI value for the S&P 500 is approximately 88, which is an extremely overbought level rarely seen in history. Using the inflation adjusted values of the S&P composite from Shiller, the RSI has been greater than 85 in only 4% of the months in the past 100 years. 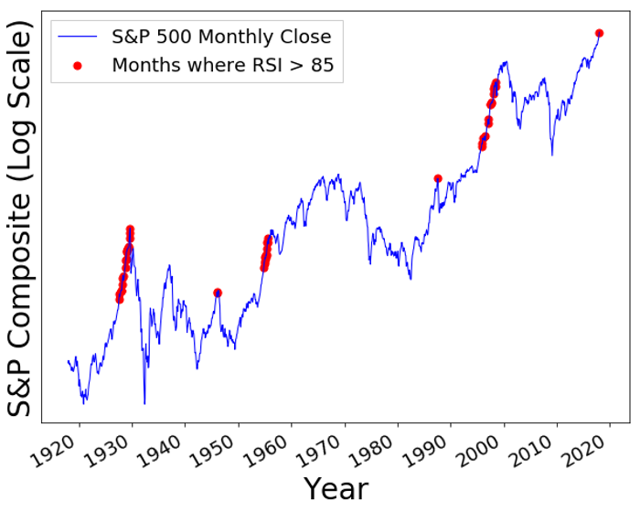 The RSI values were greater than 85 for multiple months leading up to the 1929 and 2000 crashes, but never reached such a high level prior to the bear market that started in 2008. In short, the current extremely high monthly RSI value is a potential warning sign, but not a predictor of a market top.

The RSI level is based only on the change in stock prices over time, and does not provide any information as to the valuation of stocks compared to historical norms. One common method to measure relative stock value is the cyclically adjusted price-earnings (CAPE) ratio. The CAPE ratio is the share price divided by inflation adjusted corporate earnings over a 10 year period. Prof. Robert Shiller has shown that the CAPE ratio is a predictor of future stock market performance. Elevated CAPE ratios indicate stocks are overvalued, and the risk of losses in the stock market increase as the CAPE ratio increases. Here I have plotted the CAPE ratio of the S&P composite for the past 100 years, as provided by Prof. Shiller: 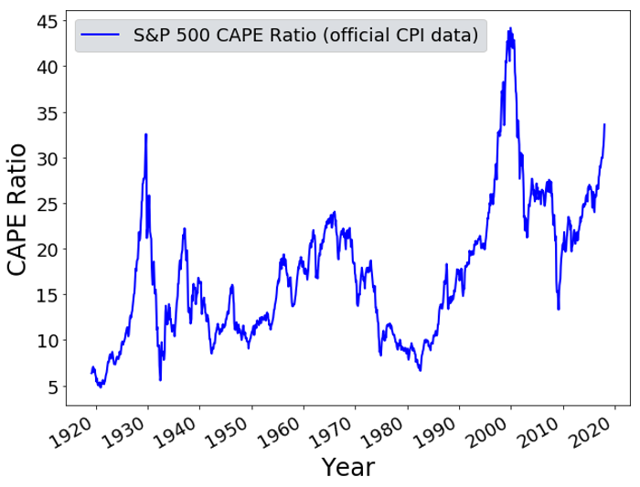 The CAPE ratio from Shiller indicates that there are only two periods in history where stock prices have been valued as highly as they are now. The first period is immediately before the 1929 market crash, and the second time is in the late 1990's at the height of the technology bubble. However, the high current CAPE value may be misleading. Prof. Jeremy Siegel showed that changes in corporate accounting have affected the reported earnings such that recent CAPE values are higher than they would have been historically.

There is another reason that recent CAPE values are artificially high, which is the changes made by the Bureau of Labor Statistics in the way inflation is calculated. Prof. Shiller uses the official consumer price index (CPI) reported by the U.S. government for inflation adjustment of prices and earnings. John Williams of shadowstats.com has shown that, beginning in the 1980's, the official CPI is lower than it otherwise would be due to various changes that the U.S. government began introducing in the CPI calculation. Using the alternate inflation data from John Williams, I have recalculated the historical CAPE ratio and plotted it here: 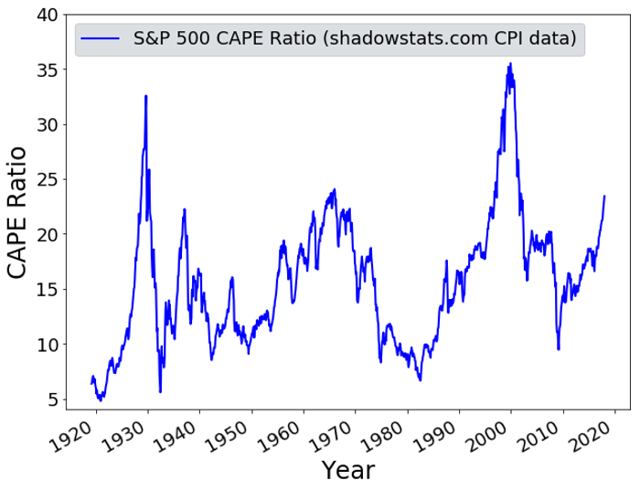 In the above chart, the CPI used for inflation adjustments was calculated by John Williams following the original formula used by the Bureau of Labor Statistics in 1980. It shows that the stock market is currently valued higher than the historical mean, but not nearly as overvalued as the official CPI numbers would suggest. Using the alternate inflation data, the mean CAPE ratio for the past 100 years is 15.6, and the standard deviation in the CAPE ratio is 5.7. I've called the CAPE ratio calculated using the Shadow Government Statistics inflation data the "CAPE-SGS" ratio to differentiate it from the standard CAPE ratio. The standard CAPE ratio and the CAPE-SGS ratio are identical prior to 1980. 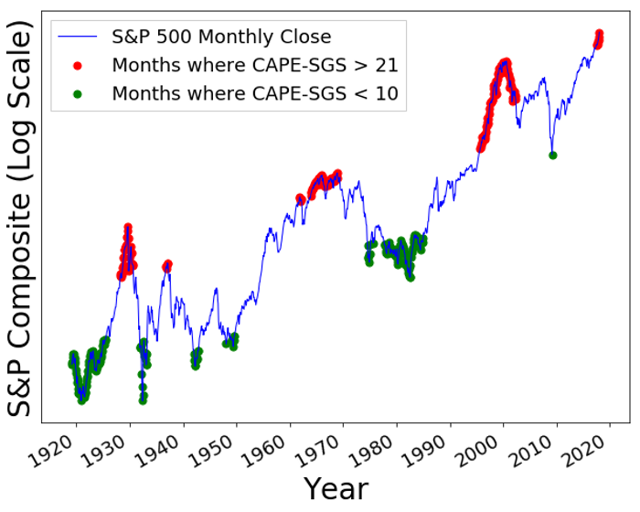 The CAPE-SGS ratio does a fairly good job of identifying major market tops and bottoms over long time frames. It is still not a great tool for market timing and missed some market tops completely. For example, the market never reached overvalued levels before the 1987 black Monday crash, or before the 2008 crash following the financial crisis. On the other hand, stock prices continued rising for years at overvalued levels in the 1990s. It is quite concerning that the market is overvalued presently and is another warning sign that stocks may be overpriced, but it cannot be assumed that a market crash is imminent.

Conclusions from the RSI and CAPE Levels

What is particularly troubling about the current stock market is that stocks are simultaneously overbought and overvalued. This is unusual throughout the history of the stock market and is certainly an indicator that a bear market may be on the near horizon. Here is a plot with months highlighted in red which the RSI was above 70 and the CAPE-SGS was above 21 at the same time: 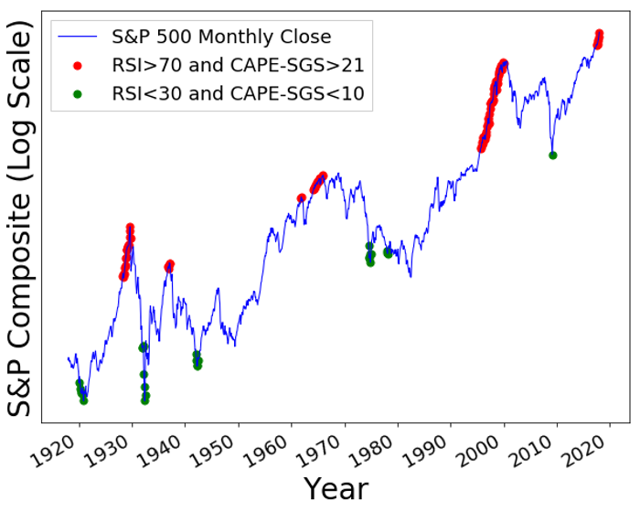 The months highlighted in green are those in which the RSI was less than 30 and the CAPE-SGS was less than 10 at the same time. One glance at the above chart shows that the upside potential has been limited following periods that have been simultaneously overbought and overvalued (months highlighted in red circles). On the other hand, the downside risk has been great and it has taken years or even decades in some cases for the market to return to previous inflation adjusted values following a decline from overbought/overvalued conditions. Is the market about to climb higher even though it is overbought and overvalued? That did happen previously in the late 1920s and 1990s. It is impossible to say if that will happen again. If history is a guide, any such gains will be transitory. The RSI and CAPE ratios are flashing major warning signals right now.

I believe that now is a good time to diversify from the broad stock market index vehicles, such as the SPDR S&P 500 Trust ETF (SPY) and the SPDR Dow Jones Industrial Average ETF (DIA) and search for value. Energy (XLE) and utilities (XLU) currently have the lowest CAPE ratios among the S&P 500 sectors. The monthly RSI for the XLE is currently 64, and for the XLU it is 53. Another option is to look outside the United States. Some international markets offer much greater value.

Disclosure: I am/we are long VGENX. I wrote this article myself, and it expresses my own opinions. I am not receiving compensation for it (other than from Seeking Alpha). I have no business relationship with any company whose stock is mentioned in this article.