The cannabis stocks are above many blue sky highs at all-time record levels. Some cannabis shares are up five to tenfold since November 2017 and the underperformers are scorned for only producing more than four years of "normal" returns in less than four months. California has gone legal, Canada is about to go legal, Attorney General Jeff Sessions recently rescinded the Cole Memorandum, the marijuana stock market is bouncing daily like a monkey on a trampoline, new Exchange Traded Funds are mindlessly pouring their shareholder's capital into the cannabis stocks, the Toronto Stock Exchange has to deal with a non-compliant Aphria listing, Canadian Licensed Producers are dumping shares on investors while they extract hundreds of millions of dollars from investor coffers to fund growth and the Canadian Securities Administrators are reconsidering their position that full risk disclosure is enough warning for cannabis stockholders. Meanwhile, investors want to know if it's too late to buy or too early to sell. Many investors are afraid to buy and scared to sell.

I will try to explain what I think investors should do to successfully invest in cannabis stocks today. 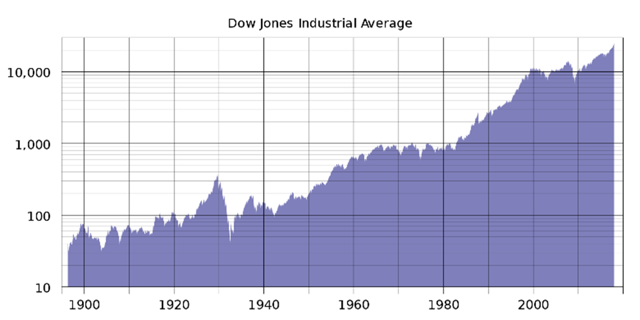 Let's begin with a look at the general case. This is a logarithmic chart of the Dow Jones Average from 1896 to the present. A few facts are evident:

Generally speaking, the value of a country's stock market reflects the growth in the underlying economy. Investors know this and their investment decisions are impacted accordingly. Stocks go up and down because in theory, investors try to track "fair value" for the market based on a "bottom up" approach, that is, by buying individual stocks. Stocks move in cycles because investors tend to bid prices up above fair value in their optimism and drive stock prices down below fair value in their pessimism. When the market gets above the so-called fair value, the main driver is emotion. Market experts refer to this emotion as greed. Greed based on not wanting to miss out on the high profits being generated by the market. When the market falls below fair value the main driver is also emotion but, in this case, market pundits call it fear. This refers to the fear of losing their money.

So investors full of optimism and greed tend to drive stock prices too high. On the other hand, when investors are motivated by pessimism and fear, stock prices can fall too low. So now we can interpret what Warren Buffett means when he advises being "Fearful when others are greedy and greedy when others are fearful." Buffett means when people are greedy, the market is probably too high so be careful. Conversely, if everyone is fearful, the market is likely below fair value so invest aggressively.

But nothing is as easy as it sounds. It is difficult to know when investors are predominantly greedy or fearful. Also, because the greed and fear are emotion-based, there is no telling how long it can go on. In my experience, these price trends up and down endure for much longer than anyone thinks. A good recent example is the U.S. stock market. Various writers on Seeking Alpha have been saying American stocks are overpriced for well over a year. Despite all this negativity, the Dow Jones Average has gone virtually straight up all of 2017 and so far in 2018.

Going from the general to the specific, over the years I have seen subsets of stocks go through their own cycles as the cannabis stocks have done over the past few years. In the past, there have been gold cycles, lithium markets and graphite plays to name but a few.

The one market event I think is most comparable to the current cannabis cycle was the high tech cycle often called the "dot-com" cycle that is also known as the "tech bubble," "the Internet bubble" and the "Information Technology bubble." It was driven by the growth in personal computers and more and more people connecting to what was called the World Wide Web. The number of U.S. households owning a computer went from one in six in 1990 to over one in three by 1997. (It's almost nine in ten today). So the excitement involved the growth of the Internet, email, e-marketing and business efficiencies.

Let's look at the NASDAQ Composite that most closely reflects those high tech start-up companies that dominated the tech bubble:

Next, let's look at a specific example. I have chosen Oracle (NYSE: ORCL) as being representative. 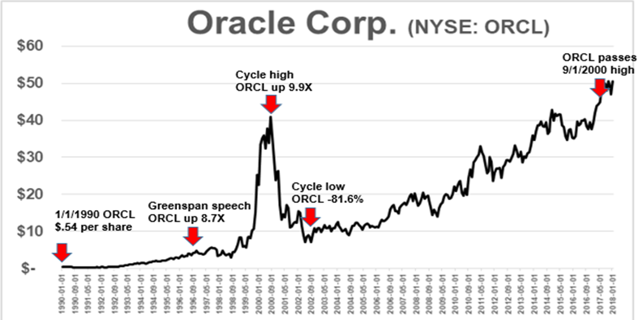 This is the chart for Oracle, Corporation. The chart is plotted using monthly data and so may not precisely agree with the analysis data which is daily and thus more accurate.

Here is what I see as important takeaways from this review of the high-tech cycle:

The next chart is the S&P/TSX Venture Composite Index covering the period during which Licensed Producers have traded publicly and I began to chart the Let's Toke Business Licensed Producer Index. I selected the TSXV Composite because it probably better reflects the cannabis group just like the NASDAQ better represented the high tech stocks. 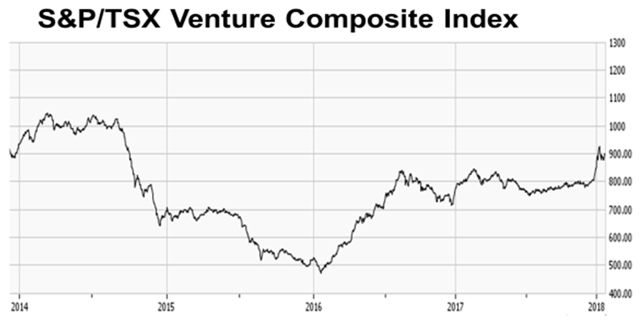 There are several dissimilarities between this chart that shows more or less the full cycle for cannabis stocks in Canada and the chart of the NASDAQ Composite Index that shows the full Dot-Com cycle from the beginning to the present. Here are some of the differences:

However, if we look at the Let's Toke Business Licensed Producer Index, we see a much different picture for the cannabis stock sub-cycle. 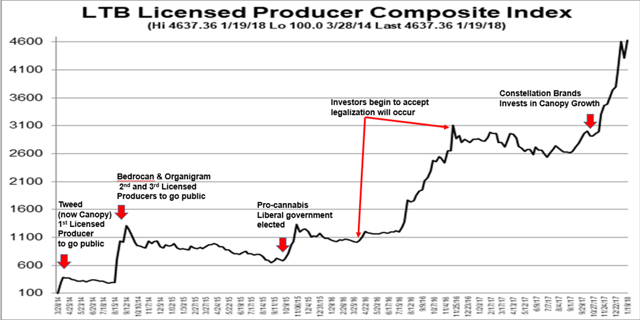 Here are some guidelines for dealing with the cannabis stocks in the weeks and months ahead based on this background:

Aphria (OTCQB:APHQF): I continue to like APHQF as it pursues its aggressive growth policies. The cloud on the horizon is the status of their TSE listing. I would hold off until the situation is clarified. An announcement is expected shortly.

Aurora Cannabis (OTCQX:ACBFF): Now that the CanniMed (USOTC: CMMDF) acquisition is being concluded successfully, I think ACBFF is bruised but not beaten. I was surprised they paid up but the acquisition vaults them to the top of the list of Licensed Producers. I would maintain positions and buy on weakness.

Canopy Growth (OTCPK:TWMJF): the company continues to reward shareholders. There is more competition at the top but TWMJF can be expected to hold its own. Their focus is now in international markets. I still believe if you only own one stock in the Canadian cannabis industry, this is it.

Lexaria (OTCQB:LXRP): a breakthrough in any of their major markets will vault LXRP to another level. We think such a major event can be expected in 2018. The stock ran up sharply but has had a substantial correction in recent weeks. I would buy LXRP at these levels.

Namaste Technologies (OTCQB:NXTTF): the recent Cannmart announcement means Health Canada licensing approval is at hand once the facility is constructed. The stock has been a big winner and may be running a little ahead of prospects. I would maintain existing positions.

Organigram (OTCQB:OGRMF): the company recently raised $100 million to fund expansion internationally. This is a plus as it was one thing missing in its corporate resumé. OGRMF has been a solid investment but is still very attractive. I think OGRMF should be a core stock in cannabis portfolios.

Radient Technologies (OTC:RDDTF): has a unique technology called Microwave Assisted Processing, or M.A.P., for extracting THC and CBD from the cannabis plant. It is part of the ACBFF portfolio and I think it is a smaller company that will continue to reward big in 2018.

Sunniva: (CSE: SNN) also trades SNNVF on the Pink and grey until an OTC listing is finalized shortly. SNN is my most recent recommendation and has moved higher but not as much as my other recommendations. I started targeting purchases under $10 CAN and then up to $12.50 CAN. The stock is on a strong uptick this week and I hope to see it come back a bit. But if you don't have any, take a starter position and add if it should weaken. If it doesn't, at least you'll have some exposure.