In our last take on the British pound in early January, we wrote that the currency was set to keep strengthening thanks to strong regional growth, moderate sentiment and the historically low value of the pound. More specifically, the currency looks cheap based on broad nominal effective exchange rates (a measure of the pound relative to other foreign currencies). Looking at GBP/USD since our last commentary, the pair strengthened from around 1.35 to above 1.41 today. Looking at the pound now, sentiment is looking a lot more stretched, and the currency is at risk of a short-term correction in the near future. In a recent commentary, we highlighted how buying British pounds has become a consensus long position. Over the longer-term, we continue to believe that the pound can keep strengthening. Specifically, expectations for tighter monetary policy is an additional factor that should drive the pound to new highs over 2018.

Following the Brexit referendum vote, markets expected the Bank of England to ease (weakening the pound). While headline inflation surged towards 3%+, few expected the BoE to hike rates into a slowing economy. The prospect of stagflation (high inflation during slow growth) is a central bank’s worst nightmare. Prior to the referendum, BoE Governor Mark Carney warned that a successful Brexit vote may result in a recession. Many leading banks and the UK government itself published similar forecasts. Thanks to the underlying resilience of the British economy and a global upturn starting in early 2017, the doomsday forecasts failed to come true.

Today, Carney’s tone is decidedly more optimistic. In a testimony delivered earlier this week to the House of Lords Economic Affairs Committee, Carney forecast higher real wage growth this year. He also stated that he was positively surprised by the “degree of churn” in the labor market, an indication of economic confidence. Lastly, he said that inflation drivers were becoming “much more conventional”. Unlike inflation brought about by a devaluation of the pound, higher wages are a much healthier sign for the economy. As inflation becomes “conventional”, the Bank of England is likely to respond using more conventional means as well. This means that more interest rate hikes are likely this year. Pound speculators continue to discount the probability of more rate hikes in 2018, and we believe this is misguided. Based on Carney’s testimony, the case for tighter monetary policy is much clearer.

Economic indicators including Eurozone and UK PMIs, consumer/business sentiment and retail sales all point to a sunny outlook for the regional economy. The latest figures show Q4 2017 Eurozone growth at 2.7% year-over-year, while the UK delivered 1.5% GDP growth year-over-year for the same period. Given the close economic ties between the United Kingdom and the Eurozone, the pound has historically rallied when Eurozone growth is on an accelerating path. As all forward-looking indicators point to an improvement in the region, the pound should keep rallying as a result. An overview of recent UK growth and inflation figures are shown below for reference:

Era of slow growth and high inflation coming to an end 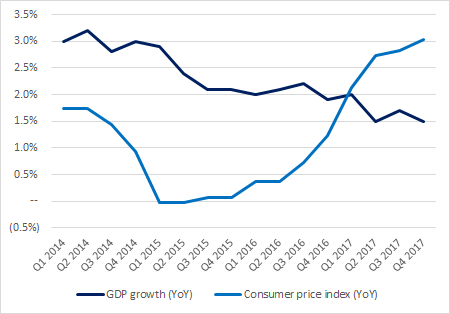 As can be seen from the graph above, the pound continues to languish in historically cheap territory.

All things considered, the longer term trend behind the British pound is bullish. Thanks to tighter monetary policy expectations, strong regional growth that is supportive for the British economy, and a historically cheap valuation, the British pound should continue strengthening this year.