For those betting that Apple (NASDAQ:AAPL) beats Alphabet (GOOG) (GOOGL) and Amazon (AMZN) to the $1 trillion market value threshold, it appears that their product line is continuing a long trend of not being able to sustain unit sales growth. The big story this quarter was the mix of iPhone X and 8 sales, but the real story is competition in the marketplace and where Apple's global market share has been and will go in the future. 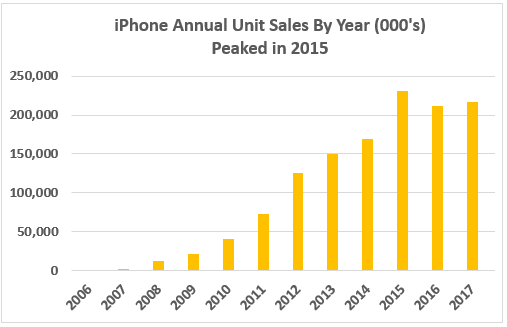 Apple products peaking in unit sales less than a decade after their debut would not be a new problem for the company. Here is a chart of iPod unit sales by year (the company stopped disclosing numbers in 2015) that shows unit sales peaked in 2008, their seventh year on the market: 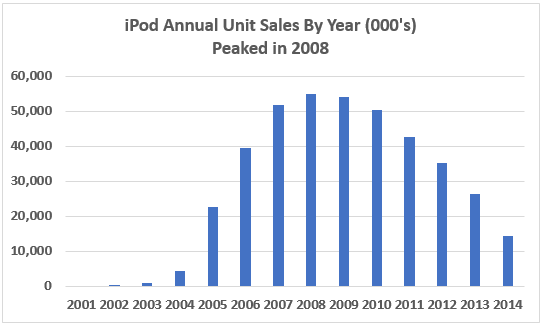 Can you guess what the data looks like for the iPad? Peaked? Yes. In their fourth year on the market: 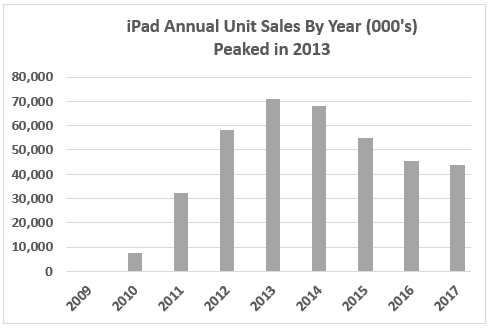 The Mac computer lifecycle has been a bit different, given how long they have been around and considering that the operating system has seen ebbs and flows in popularity over time. Still, though, Mac sales seemed to have peaked in 2015: 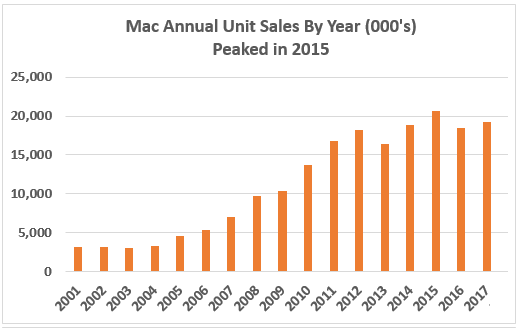 These trends are probably why Apple stock has had a tough time garnering a market multiple on Wall Street. They indicate that Apple really is a hardware company that relies heavily on big product launches, but over time, competitors either take a lot of market share or Apple itself renders their own product lines obsolete.

That earnings multiple though, has been rising in recent years on the notion that Apple will become more of a services company that relies on high margin software-based products for growth, as opposed to unit sales increases.

In recent days, we have seen investors become a bit skittish about iPhone sales figures and that higher earnings multiple appears to be on slightly less firm footing. The good news is that the company intends to get to a "zero net cash" position over time, thanks to the new tax law. With $31 per share of net cash right now, Apple's operating business fetches only about 13 times trailing free cash flow of ~$10 per share. Such a price does not require much in the way of hardware unit growth.

Of course, the hidden benefit that comes with declining hardware unit sales is that services will grow faster, as a percentage of total revenue. If they eventually reach 25% or so, investors will have more of a reason to justify a higher multiple of earnings. That end result seems likely to be years away, but if Apple shares continue to fall and get back to having a "hardware multiple," it will likely be an attractive entry point.

So while I am not keen on their hardware product sales trajectories, or their innovation in recent years along those lines, that does not mean the stock is a poor investment. Instead, it just means that we should all probably lighten up holdings when it gets materially above say, 15x, and add to positions when it drops materially below 15x.

Chad Brand
1.24K Followers
Chad Brand is the founder and President of Peridot Capital Management LLC, a Seattle-based independent registered investment advisor (RIA), specializing in highly customized investment management services for individuals and families. We work with our clients to deeply understand their goals and help craft and execute personalized plans in order for them to reach their short, intermediate, and long-term financial objectives. Our company’s goal is to provide our clients with a financial professional who acts as their personal financial concierge, providing the kind of unique client relationship that makes them feel like they are the firm’s only client. This philosophy is in stark contrast to the country’s largest investment firms, which often put sheer size and profits above their customers’ interests.REGULATORY DISCLOSURES:Peridot Capital Management LLC is a registered investment advisor in the states of Maryland, Missouri, Texas, and Washington. The firm may not transact business in states where it is not registered or exempted from registration. In most states, the firm is exempt from registration if it has fewer than six clients who are residents of that state. As a result, Peridot Capital Management LLC is free to provide services to residents of every state and applies for registration as required. Individualized responses to persons that involve either the effecting of transactions in securities, or the rendering of personalized investment advice for compensation, will not be made without registration or exemption. The content published represents the opinions of Mr. Brand and he and/or his clients may hold positions in securities discussed. Such positions will be disclosed at the time of publication, although subsequent changes to those positions will be made without notification. The information contained in posts is believed to be accurate when published, however, mistakes could be made. As a result, do not rely on the content exclusively for your investment due diligence. The commentaries published do not way constitute investment advice, as readers’ personal investment goals and risk tolerances will dictate which investments are appropriate for them. Our posts are meant to be one of many sources for readers to conduct their own research into specific investments. Consult an investment professional before acting solely on information provided. If you do not have an investment professional to work with, you may contact Peridot Capital Management LLC directly.
Follow

67 Comments
To ensure this doesn’t happen in the future, please enable Javascript and cookies in your browser.
Is this happening to you frequently? Please report it on our feedback forum.
If you have an ad-blocker enabled you may be blocked from proceeding. Please disable your ad-blocker and refresh.