The stock market (SPY) traded sharply lower on Friday February 2nd with a follow on plunge on Monday February 5th.

With the market downturn, SPX volatility (VIX) returned with a vengeance.

This article examines underlying cause of the rapid return of market volatility, and why the market is likely to shift to sell the rally mode for the intermediate future. 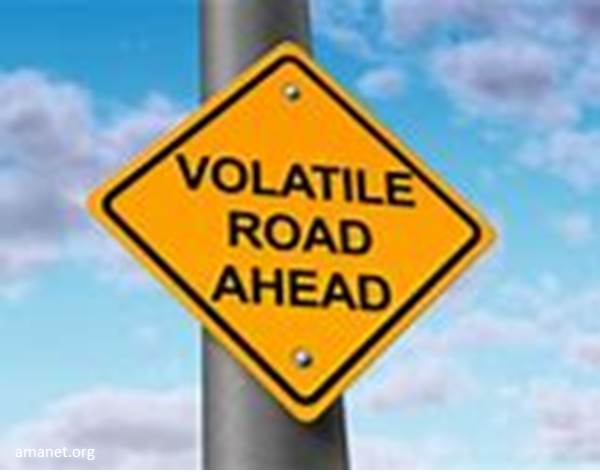 The U.S. stock (DIA) (QQQ) and bond markets (TLT) recently reached historical high water marks in terms of valuation. During the trading session on February 2nd and then followed on February 5th 2018, the peaceful and dramatic ascent of the stock market to its pinnacle point of 26,671 set by the DJIA on 1/26/2018 was interrupted by a rapid return of volatile trading activity. Investors were suddenly reminded that when it comes to the stock market, "risk happens fast."

As the painful couple of trading days unfolded, market volatility as measured by the (VIX) (VXX) (VIXY) returned with a vengeance. The most visible market victim of this changed market environment was Credit Suisse's (CS) sponsored Short Volatility Exchange Traded Note (XIV). The short volatility trade was a way for investors to pick up a "little extra yield" by holding a very small position in their portfolio on the premise that volatility would remain permanently low into the future. The XIV is now being liquidated, based on a single day trading event. The derivative casino that the central bank largesse throughout the world instigated has claimed its first whale. Investors once again see, just like in 2008 when mortgage related derivatives were busted, when the gamblers lose in a big way, the stock market can, and will collapse quickly. The biggest victims, primarily institutional investors and hedge funds, from the fund liquidation were the following based on percentage ownership (see here):

But many retail investors were also harmed as they piled into a bet that the stock market would just continue to go up forever without any major correction again. The "seemingly" very high returns of the ETF over the past two years were just too enticing for many investors to stay away from. But anyone that held the ETN now is left wondering why they were such a moron.

Anyone familiar with statistics realizes that this type of bet in a market that is both highly negatively skewed with low kurtosis is eventually going to be burned. Simply put, everyone who owns stocks and bonds in a long portfolio (401K and IRA) is short volatility. When the market goes down, you lose money. But you can hang on to the asset, or swap into a new one and eventually have the opportunity to get your money back. The volatility ETFs are single day bets, and can go bust in a big way any day if the market acts in a manner which is out of the ordinary. And thanks to regulations in place, the demise can be far more serious than most investors comprehended. And the market historically always goes down in a big way eventually; but it goes up more often. As historical data shows, the stock market tends to have an aberrational negative event on a frequency of about 1 every 4 observations over the 61 year time series from 1952 to 2013. 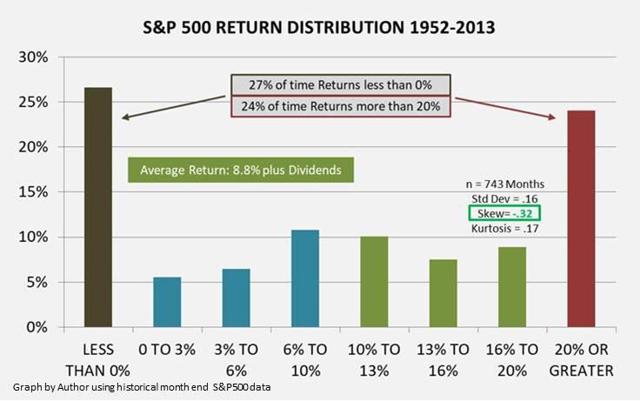 However, stock market returns over time are not normally distributed by a long shot, as the underlying skew and kurtosis statistics reflect. Stock market returns over time are skewed negatively in a statistically significant way - which is a fancy way of saying results are typically positive, and above the average, until they suddenly are not. And, when stock returns do fall, they typically decline rapidly and substantially, creating a long negative tail in the distribution.

The VIX Index measures the temperature of the market every trading day, and provides a reading on whether the market is undergoing a shift that is causing SPX (SPY) returns to change rapidly at any point in time. The higher the reading, the more change (risk or beta) the market is experiencing. The VIX is a good proximate reading of the relative change in "risk" level in the trading of the market at a particular time. However, it is a relative temperature gauge only, and using it to structure an investment product is criminal because it is not investing at all, it is just gambling. If you disagree with my assessment, then just read what the inventor of the VIX thinks about the volatility based financial products in the market today. (Inventor of VIX: 'I Don't Know Why These Products Exist' - Bloomberg)

And the reason it is gambling is that if you plot the entire S&P year over year time series end to end, rather than aggregated on the tails as I have done for illustrative purposes, the distribution appears somewhat normal over a long period of time. But, the big issue is that returns are skewed to the right thru time. The skew statistic of -.32 is more than 2 standard errors from 0 in the sample I have used to test the returns, meaning that it is significant. The skew is indicative of forces which influence the return pattern for short periods of time, but then changes sometimes very abruptly. In addition, the pattern of returns is very biased toward a positive result sequentially, until it breaks down, meaning prior results tend to influence the next result.

Given that you cannot expect that market returns will be random, structuring a product like a short volatility ETF produces a "snake oil" investment that always losses money over time because eventually the product will explode when the underlying market forces which are driving the market at any given time re-vector in a totally different direction, like they are right now. The FED and Central Bank Asset buying programs over the last 10 years, and particularly the international central bank asset buying since the end of 2014 have had a strong influence on the right side skew in returns that has recently been recorded in US stocks.

Since January 2014, the yearly return on the S&P500 showed a skew level of -.45, showing a positive return tendency in the market well above the historical average from 1952 through 2013, even with the downturn at the end of 2015 and early 2016! In addition, the S&P500 Index persistence in remaining negatively skewed on a 4 year interval basis currently remains beyond levels reached in any other time period since the 1950s. In other words, the recent market breakdown was just waiting to explode lower; it is just a matter of the force which is skewing market returns abnormally positive to change direction without a new force big enough to replace it. And in addition, the event that just happened was not big enough to rid the market of the liquidity demons that have it so negatively skewed beyond historical norms currently.

A Very Unusual Event - Possibly a Canary in the Coal Mine

The breakdown on February 5, 2018 has been described as a 13 standard deviation event by market experts at Goldman Sachs. In other words it never should have happened, but it did. 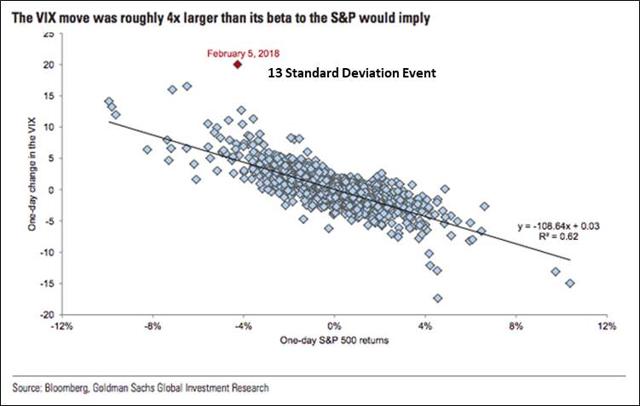 The major outlier move in the VIX relative to the underlying S&P500 asset it tracks is perfectly understandable given the market conditions that led up to the stock market top on January 26, 2018. Stocks had not had a correction greater than 5% in over 400 days thanks to the kamikaze "sell YEN and buy any traded US asset available" BOJ and the equally reckless ECB which has cornered the market for defunct European sovereign credit and corporate investment grade bonds. The result has been an unprecedented inflow of dollar demand for traded US equities, which was also super-charged by President Trump sending out a "buy stocks now" message to millions of unsuspecting small investors because the glorious Tax Reform Bill had just passed.

But plenty of market players in the derivatives casino new the pent up pressure on the market could not last forever. So, the longer and higher the market went without a set-back, the more bets were being placed going long, versus short volatility to protect against a quick collapse in the market. It was well known in the trading community that when the reckoning day came, it would not be pretty. SPX Volatility had been low for so long, and so many gullible investors were holding the ticking time bomb, that the nightmare scenario was bound to happen.

The "black swan" scenario, which would be exacerbated it not perpetrated by new regulatory requirements (who have chosen to regulate rather than prohibit the bets all together), is a quick end-of-day volatility spike triggered by a large sell-off, which pushes ETF and ETN issuers to re-balance positions quickly to avoid unhedged overnight risk or excessive tracking error. The short vol. "investment" products were not "too big to fail", but by design they were "built to fail", or at least gravitate to a value close to 0 in a major sell-off event. Because there was so much action in the derivatives pit relative to the market itself when the February 2nd followed by the February 5th sell-off event occurred, the short volatility derivative blow-up produced a fall in the stock market that was very large and very fast. So far, contagion to other asset classes appears to be minimal. But, stock trading remains very volatile two days after the collapse of the XIV, and technically the close on Wednesday February 7th was very weak.

The event is reminiscent of the 2008 "canary in the coal-mine" blow-up of the credit derivatives in the sub-prime mortgage industry sector in the US. The collapse of these derivatives ended up being transmitted through the banking system and eventually resulted in a banking system meltdown as both Bear Sterns and Lehman Brothers went bankrupt. The sub-prime mortgage industry bets, insured by AIG (AIG), once the unthinkable but again very realistic event of borrower default occurred, ended up having a very out-sized impact on the financial system as a whole.

Pay Attention, Sudden Return of Market Risk is Not a Buying Opportunity

The jolting return of market volatility is sending a warning of a serious shift happening in the market. And that shift is being propelled by the slowdown in extraordinary central bank asset buying programs throughout the world that created the low volatility market experienced over the last several years, to a market which will be driven much more by fiscal policy and a Tax Reform change.

Investors would be well advised to shorten their portfolios in terms of credit and stock duration presently. It does not appear that increased market volatility is going away anytime soon, and both stocks and bonds are priced too high for the level of risk in the market at the present time. Don't be the "moth drawn to the flame" that bails out the over-extended portfolios of investors who are trying to run for the exits currently.

Daniel Moore is the author of the book Theory of Financial Relativity. All opinions and analyses shared in this article are expressly his own, and intended for information purposes only and not advice to buy or sell.

Follow Daniel R Moore and get email alerts
+
Add a comment
Disagree with this article? Submit your own.
To report a factual error in this article, click here.
Your feedback matters to us!