Likelihood of an abrupt rise in interest rates is low due to continued low inflation.

Current weakness a short term correction and buying opportunity rather than the start of a bear market.

Editor's note: Seeking Alpha is proud to welcome The Basis Point as a new contributor. It's easy to become a Seeking Alpha contributor and earn money for your best investment ideas. Active contributors also get free access to the SA PRO archive. Click here to find out more »

The market is taking a breather. How long of a breather, though? Pundits who prefer regular-sized movements in financial markets have been worried for a while that this economic expansion has been going on way longer than normal and that the bull market associated with it is vulnerable. On average, this bull market should have ended in February 2017. We are living on borrowed time, they rant. We are due for a bear market.

And look, now we are getting one. 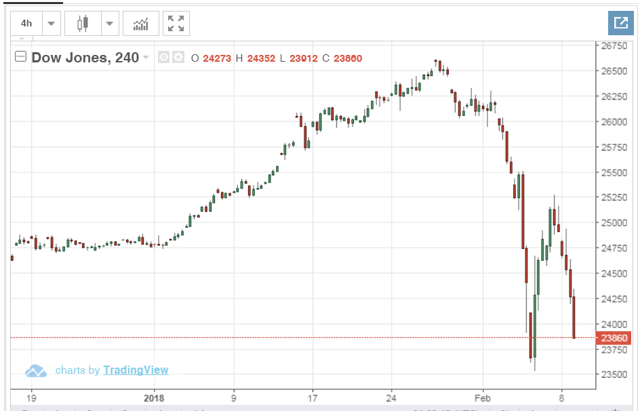 For most of the last nine years, folks have been remarking on the subdued pace of growth of this economic expansion. GDP growth has been averaging 2% p.a. while every other expansion since the 80's has averaged above 3% p.a. But, following the 2015 lull, (caused, in our minds, by some combination of dollar strength and oil price weakness), things started to get re-energized. Industrial production, durable goods orders, investment spending, exports, Purchasing Managers Indices of all descriptions staged a major comeback in 2016 and by the middle of 2017 GDP growth had hit the magic 3% number two quarters in a row and the ISM Manufacturing PMI was at the highest level since 2004.

Presented with these changed circumstances, the stock market, in all its wisdom, with a glance at the core CPI stuck at 1.7% and average hourly earnings growth hovering at 2.6%, saw no good reason to change its expectations regarding the glacial pace of interest rate increases. Instead, it allowed itself to become overcome with delight contemplating the heavenly effects on earnings of faster growth and, looming on the horizon, a massive corporate tax cut.

The congenitally pessimistic bond market, however, got upset. Having declared the end of disinflation in mid-2016, it signaled its discomfort with this new robust pace of activity in September (bond yields bottomed at 2%) and really started ringing alarm bells at the turn of the year.

Equities, however, can be perversely oblivious. It took the Fed's upward revision of inflation expectations in the late January meeting to bring the market to its senses, startled by the vision of 3% long bond yields and forced to reflect on the ramifications of perhaps more than the three rate hikes it had been promised in 2018.

(Some folks, not so long ago, were worried about a yield curve inversion. Oh no. The whole curve is moving up. These same folks were also bewailing the disappearance of the bond market vigilantes - how can the bond market usefully signal the risk of overheating if it's always obsessing about deflation? Apparently, the vigilantes are back.)

So, tighter money is weighing heavily on equities - possibly even stirring a little panic. So, the question we have to ask ourselves is "how much tightening does the economy really need?" Because, while there is no question that tighter monetary policy - higher short term interest rates - is bad for equities, there is always the important question of degree. A Fed trying to snuff out a burst of inflation, as in 1989, 2000 and 2008, will have to tighten more seriously. And in these instances, the stock market did indeed suffer various degrees of damage. However, in the single instance in recent times when the Fed tightened in the absence of significant inflationary pressure - in 1993 - the stock market barely flinched.

The point here is that in the absence of a real inflation problem, the Fed doesn't usually have to tighten much.

The last time we asked ourselves this question, in late 2013, the answer was an unequivocal "almost nothing at all". Both the CPI and the PPI were running below 2% and AHE were rising at 2.1%. And sure enough, equities wobbled with fear at the thought of even slightly tighter monetary conditions (remember the taper tantrum?), but did not fall down.

Today, the situation is more nuanced. Yes, the CPI is running below 2%, but the PPI was up 3.3% in December, the labor market is as tight as a drum and average hourly earnings were up almost 3% year on year in January and look like they have every reason to continue accelerating.

Nevertheless, disinflationary forces are still very much in effect. Excess capacity globally in manufacturing, e-commerce-inspired, cut-throat competition in retail and generally low commodity prices are helping to keep prices down. And a lower participation rate and an 8% U-6 unemployment rate suggest that the labor market is not as tight as it looks.

So, yes, there is some inflationary pressure. But, in our view, there is no bona fide inflation problem.

On balance, then, the economy needs moderately tighter monetary policy. No big deal. Certainly no need to start forecasting recession. Of course the stock market is peeved to realize that PEs can't go up forever and that 3% GDP growth plus a tight labor market requires a faster tightening mode than two quarter points a year. But it will get over its peevishness.

Investors should think of this interruption as a wake-up call. Zero volatility and a huge tax cut in year nine of a bull market were bound to lead to excessive enthusiasm - enthusiasm that would need, in turn, to be wrung out of the market with some price weakness.

But, in our view, there is no need to start a bear market.

Follow The Basis Point and get email alerts
+
Add a comment
Disagree with this article? Submit your own.
To report a factual error in this article, click here.
Your feedback matters to us!