Volatility is back. The VIX Index went above 30 for the first time since August 2015. That long-dormant volatility has immediately begun to derail IPO activity: Three deals postponed this past week, and two more pushed back to next week. Of the six that priced, five broke below issue at some point, and the group averaged a return of just 0.8%.

The IPO market typically slows down to a crawl during tumultuous markets. Some IPO buyers shun new issues entirely, and instead manage their existing portfolios. The remaining investor base demands far greater IPO discounts. Contracting peer multiples raises the risk of first-day losses, and IPO investors begin only accepting valuations that clearly offer upside. Many companies would rather hold off than accept those terms. 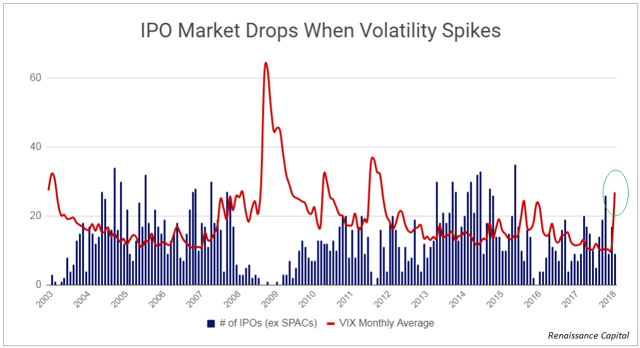 The last major bout of volatility in 2015 caused postponements and major pricing concessions. After the VIX spiked in September, over half of the 32 IPOs in the 4Q15 priced below the range, and first-day returns were below-average at +7%. However, discounted valuations on fundamentally strong companies led to buying opportunities: IPOs like Square (SQ; +340% from IPO), Match Group (MTCH; +198%) and Mimecast (MIME; +219%).

Some deals get done regardless of volatility. The 4Q15 saw winners like Ferrari (RACE) and Atlassian (TEAM), each now up over 130% from IPO. Biotechs with heavy insider buying have also IPO'd in difficult markets. We saw this in the 1Q16, when only eight IPOs priced, most of which were pre-sold biotechs.

The next two weeks will only see a few deals, but volatility is not the culprit. There is typically a lull in mid-February as companies prepare the prior year's financials and wait until after the Presidents' Day break. With few notable filers in the IPO pipeline, the level of new filing activity in the coming weeks will indicate whether we can still expect a pick-up at month-end, or if companies are deciding to wait out the storm.

Renaissance Capital IPO Research
6.91K Followers
Renaissance Capital provides pre-IPO research to institutional investors and investment banks. The Firm manages two IPO-focused funds: The Renaissance IPO ETF (NYSE: IPO) and the Renaissance International IPO ETF (NYSE: IPOS). Individual investors can get a free overview of the IPO market on www.renaissancecapital.com, and try a free trial of our premium platform, IPO Pro (ipopro.renaissancecapital.com). Through Renaissance Capital’s pre-IPO research service, institutional investors get an independent opinion, in-depth fundamental analysis, and customizable financial models on all IPOs.
Follow
To ensure this doesn’t happen in the future, please enable Javascript and cookies in your browser.
Is this happening to you frequently? Please report it on our feedback forum.
If you have an ad-blocker enabled you may be blocked from proceeding. Please disable your ad-blocker and refresh.