What we know about what's going on in Hong Kong is limited. That's a real shame because I have no doubt what has been transpiring is important for a lot more than Hong Kong and the short run. The connections are too obvious for it to run any other way.

I've been asked several times to diagram or further explain what I think is happening. There's just no way to do so, no matter how much anyone might want to. I certainly do, believe me. Information is at best highly limited, and more likely than not the transactions will never come to light.

Despite these limitations, there is enough evidence in price movements and rates to sketch out some rough contours. Keeping more toward general rather than specific ideas, we can reach reasonable conclusions as to the overriding nature of the issue.

It's almost like astrophysics, where physicists detect massive objects not by observing them directly, rather by spotting the effect they have on other objects that can be observed. Mass means gravity, and gravity means distortions that can be studied, measured, and better understood.

If we start with a simple banking premise of a fractional reserve system, the mess in HKD money markets (HIBOR) can only be a true outlier. 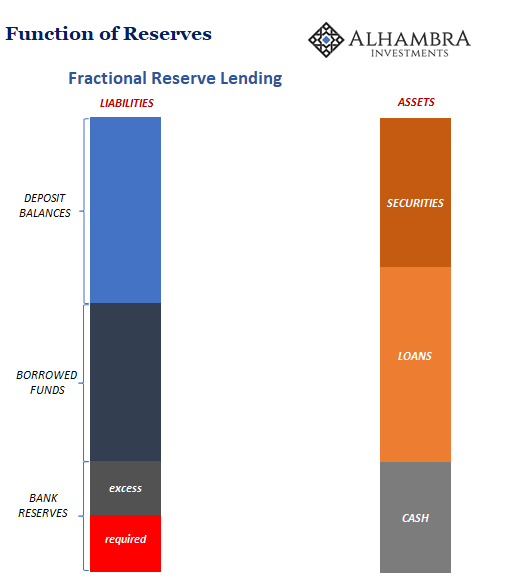 If we assume a Bank A (pictured above) with a stylized balance sheet, confronted with rising money rates Bank A would prefer to mobilize excess reserves to satisfy the demand. The reason they would do so is profit; that is, the expected additional interest for other considerations including risk (which in this setting, especially HKD, should be low, perhaps close to nil). 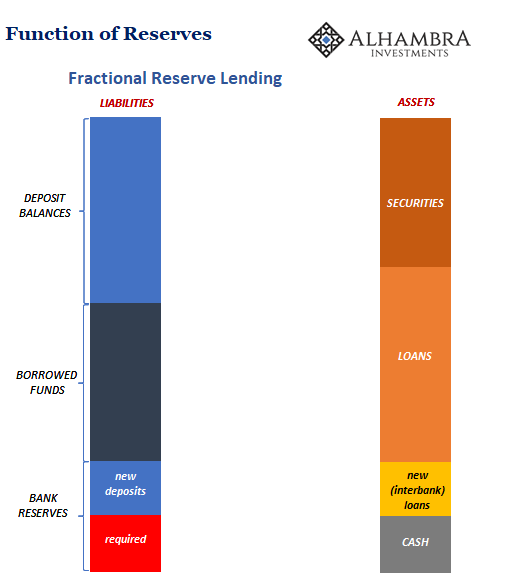 Thus, what will happen is excess reserves will be exchanged with (unseen) Bank C for its purposes. The effect on Bank A's balance sheet is a higher balance of deposit liabilities corresponding to the increase in loan assets, in this case interbank loans.

That raises the possibility of one constraint, or bottleneck. If Bank A held no excess reserves on its balance sheet, it would be unable on its own to meet Bank C's demand for money. If we assume Bank C is in demand for reasons of risk (liquidity or credit), meaning Bank A can borrow interbank funds at a rate Bank C cannot, then Bank A would itself, all else equal, borrow in interbank markets to redistribute to Bank C at a risk-adjusted spread. 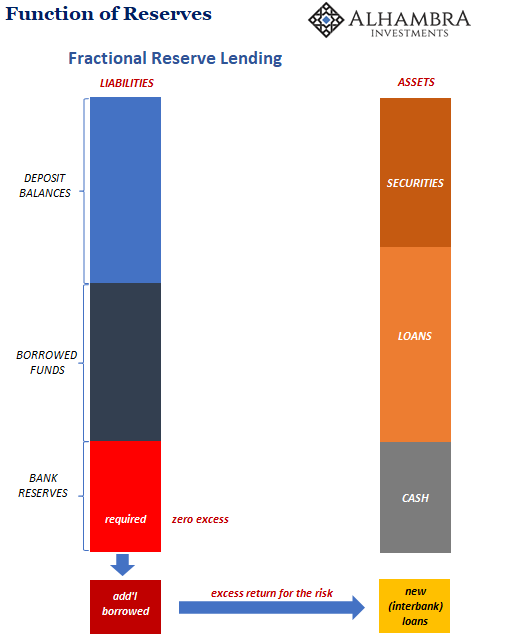 This happens all the time, and is a completely normal part of any interbank market. It is, in fact, the whole purpose of interbank markets, or was in the beginning before they were transformed into the wholesale format for comprehensive funding.

What's more, given an opportunity, banks in general will create reserves for interbank demand - if they can. 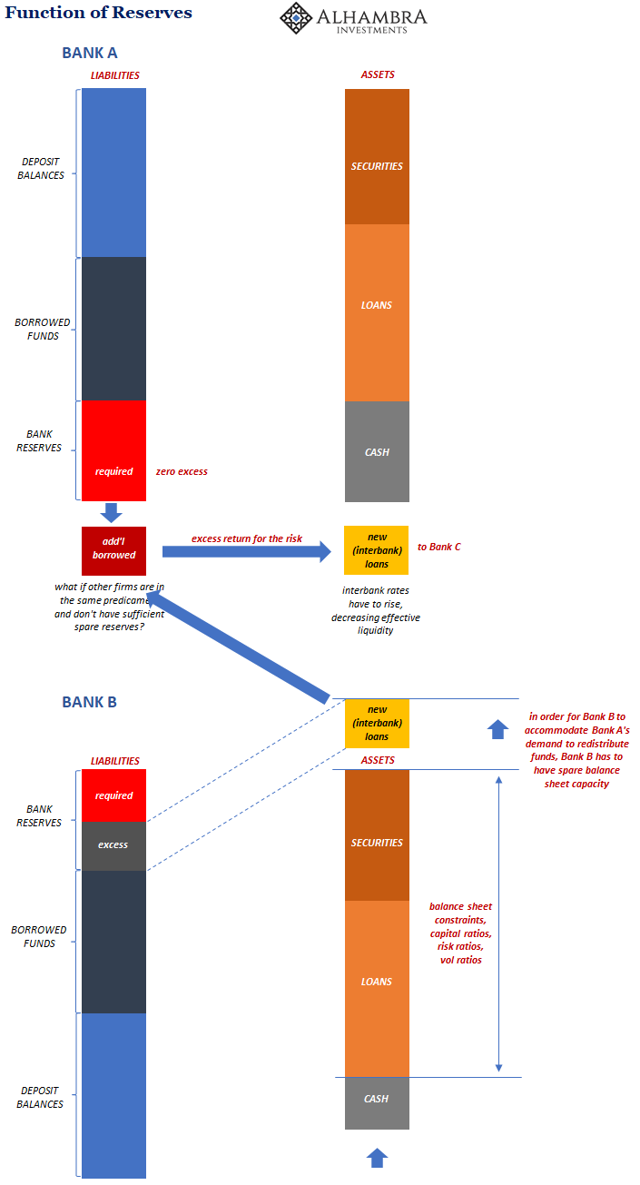 To go into the interbank market requires, obviously, a Bank B to fund the commitment to Bank C via Bank A. In this arrangement, whatever is the problem with Bank C is immaterial to our discussion and doesn't necessarily mean an unusual environment. What we know from rising HIBOR is that "something" is impeding Bank B from lending to Bank A, and that's where we need to focus.

The most obvious problem is the bottleneck we already raised; in other words, excess reserves. If Bank B doesn't have them, then it can't forward them to Bank A and therefore Bank C. That is a highly unlikely scenario, especially in Hong Kong where the HKMA is highly responsive to just that sort of condition.

Instead, the issue is almost certainly on Bank B's balance sheet. In order for it to accommodate Bank A's lending request, it must have itself sufficient balance sheet capacity to fit this new loan in under its own constraints. These balance sheet restrictions are things like capital ratios, liquidity ratios, volatility ratios, etc., all the mathematical calculations (that banks use derivatives to manipulate) that place a limit on just how much the asset side can stretch (or in extreme cases, like 2008, how much it must shrink). 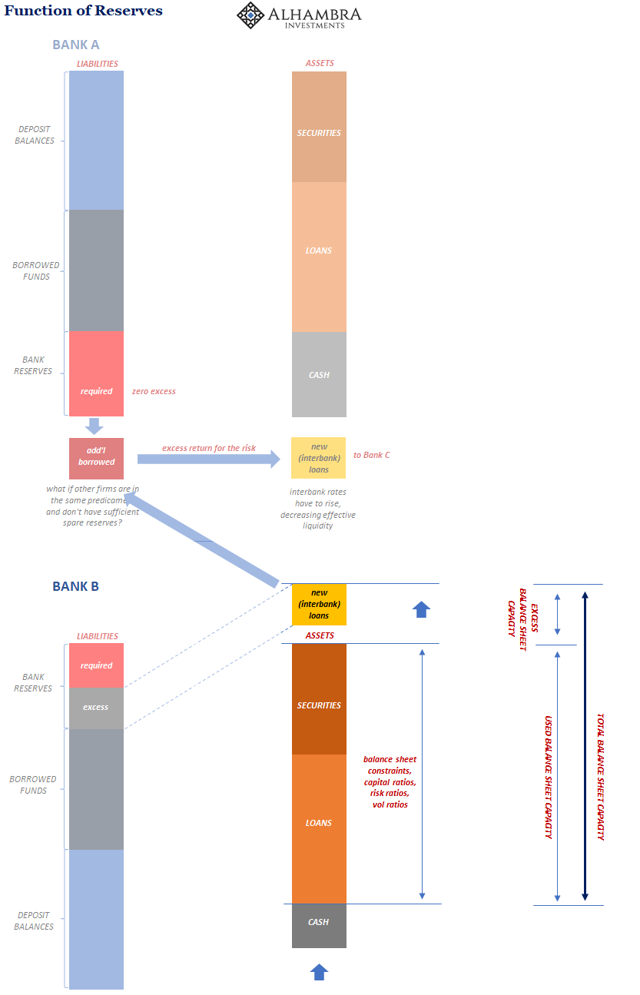 An interbank loan to Bank A in this way would not require a whole lot of excess capacity. It would, instead, take up very little in terms of efficiency. That's what's so intriguing and compelling. If there is something impeding this process, it must be substantial for it to eliminate the majority of what otherwise would be an inobtrusive funding arrangement from B to A.

Furthermore, it clearly has escalated in real conditions the more HKD is involved in the inverse of CNY.

Therefore, it's reasonable, if still speculative, to conclude HK banks like Bank B are being tasked with something that is especially balance sheet intensive. That would mean taking on securities that are specifically volatile, illiquid, and just in general, feature a whole lot more risk; such as FX $ swaps that are then forwarded to Chinese counterparties. These would be the very definition of balance sheet intensive, especially over the past six months or so and especially with Chinese banks on the other side of them. 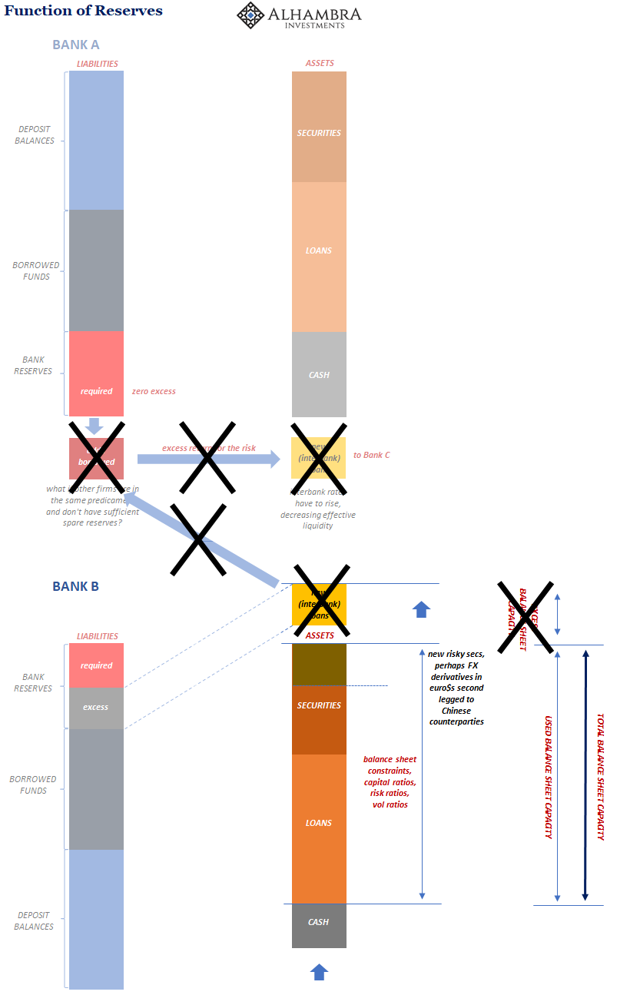 The more HK banks "have" (I make it sound compulsory because I don't know that it's not, with some kind of cajoling on the PBOC's part; it may be completely voluntary in that these Hong Kong-based Bank B's are being handsomely compensated for using up so much spare balance sheet capacity in the deals) to do in China's ad hoc "dollar" bypass, the less capacity they will have for excess funds in HKD interbank.

The lack of "excess" balance sheet capacity impedes all the transactions from that point forward, leaving Bank A unable to meet the demand from Bank C. HIBOR rates rise and volatility results in a place where volatility is, or used to be, quite rare for a reason. 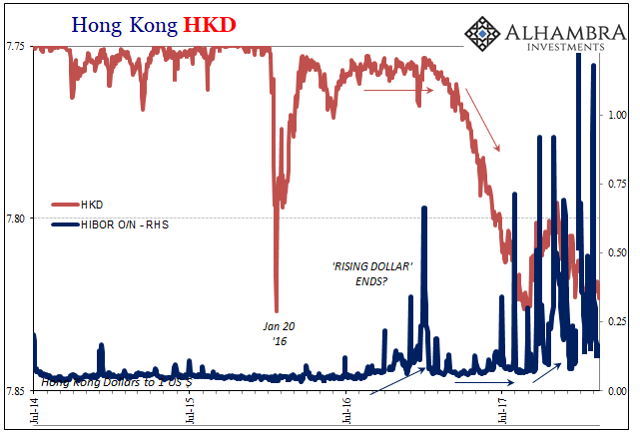 Hong Kong's interbank market is left with a lot of Bank B's that cannot seem to meet the demand for HKD. Maybe that's strictly a city issue, unrelated to anything going on in dollars or on the mainland. Given what you see above, which is enough by itself, it seems far more likely if unconfirmed that what's been going on in this part of the Asian "dollar" is in general consistent with what I've sketched.

If HK banks are having problems meeting HIBOR and HKD money, then it's also reasonable to conclude they aren't likely doing much elsewhere, either. It's also a possibility that as funding in HKD gets problematic (self-reinforcing), HK banks like a Bank B are left doing a whole lot more (liquidating) than denying Bank A's funding demand. 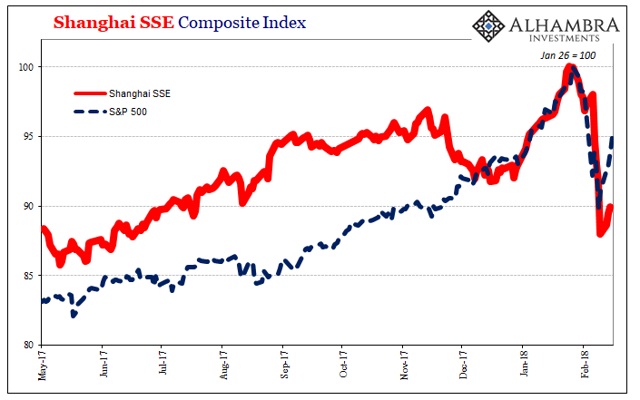 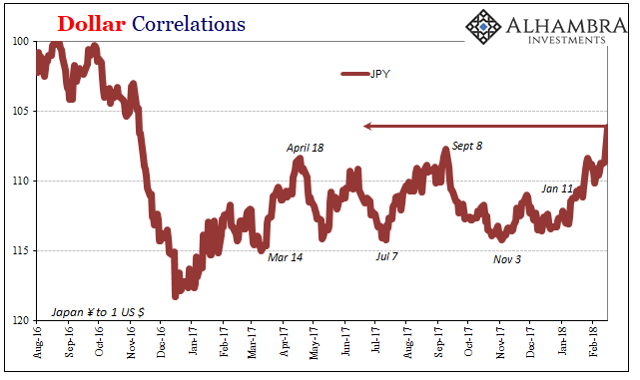 Most people, especially those gripped by inflation hysteria as well as the related boom euphoria, would prefer to ignore all this or at most dismiss its significance. I can't, however, given the timing and correlation with a lot of other things, particularly the further escalating series of global "anomalies."

Global liquidations aren't normal, and while everyone is content to focus on US VIX simply because it's the latest benign explanation even if it offers no explanation at all. I don't have anywhere near all the answers, either, but there's been a lot more going on in the world than XIV.

Jeffrey Snider
4.65K Followers
As Head of Global Investment Research for Alhambra Investment Partners, Jeff spearheads the investment research efforts while providing close contact to Alhambra’s client base. Jeff joined Atlantic Capital Management, Inc., in Buffalo, NY, as an intern while completing studies at Canisius College. After graduating in 1996 with a Bachelor’s degree in Finance, Jeff took over the operations of that firm while adding to the portfolio management and stock research process. In 2000, Jeff moved to West Palm Beach to join Tom Nolan with Atlantic Capital Management of Florida, Inc. During the early part of the 2000′s he began to develop the research capability that ACM is known for. As part of the portfolio management team, Jeff was an integral part in growing ACM and building the comprehensive research/management services, and then turning that investment research into outstanding investment performance. As part of that research effort, Jeff authored and published numerous in-depth investment reports that ran contrary to established opinion. In the nearly year and a half run-up to the panic in 2008, Jeff analyzed and reported on the deteriorating state of the economy and markets. In early 2009, while conventional wisdom focused on near-perpetual gloom, his next series of reports provided insight into the formative ending process of the economic contraction and a comprehensive review of factors that were leading to the market’s resurrection. In 2012, after the merger between ACM and Alhambra Investment Partners, Jeff came on board Alhambra as Head of Global Investment Research. Currently, Jeff is published nationally at RealClearMarkets, ZeroHedge, Minyanville and Yahoo!Finance. Jeff holds a FINRA Series 65 Investment Advisor License.
Follow
22 Comments