When I discussed the headlines from Apple's (NASDAQ:AAPL) fiscal first quarter earnings report, the iPhone surprised many in two very different ways. On one hand, the 77.3 million units sold was a disappointment to the street by at least three million units, while the average selling price of $796 was well above what many thought Apple could fetch for the smartphone. With questions over sales of the iPhone X, there is a collective thought that iPhone selling prices have peaked for now. Today, I'll explore the alternative, that iPhone prices are going to go further higher.

The first reason to argue for higher prices is that Apple may be cutting out the bottom end. While this will disappoint consumers like me that love the iPhone SE and its smaller size, recent rumors suggest that if we do get a SE2 named device, it is going to be much bigger, basically in-line with current phones. As the article suggests, Apple may be trying to use all of its resources as to not have a staggered iPhone launch like we saw in 2017, and that might eliminate a refresh of the current sized SE. That's unfortunate in my opinion, given how CIRP estimated below that the SE had a more than 10% iPhone share in the US during the September 2017 quarter.

Even if Apple does release a new version of the SE, it likely will go for more than the $349 the current version does. While that will partially be due to improved technology, the rise in memory prices will also play into this. Last fall, Apple quietly raised iPad prices, with speculation that memory prices were the main culprit. A new small screen SE could start at $449 or even higher, depending on the storage size, which would help average selling prices. Further increases in memory or other component prices could lead to higher prices down the road as Apple looks to maintain margins.

If Apple does not come out with a new smaller screen version, some speculate that a new phone named the SE could have a 6.1 inch screen size, as detailed in the rumor article I linked to above. Any phone of that size is likely to cost at least in the $600-$700 range, if not more. This phone could actually be the next generation of the iPhone 8 with a LCD screen, as some think the other two phones released this year will be OLED screens. With some thinking that Apple could deploy a second generation of FaceId across all phones, prices wouldn't be going down.

The current iPhone X with a 5.8 inch screen started at $999, but if Apple has a newer version that goes to a 6.5 inch screen, as detailed in the concept image below, I could easily see the starting price topping $1,000. Perhaps we'll have two OLED devices, one that goes for $899 and another that starts at $1,099. In this scenario, both of these devices would be going for $100 more than the iPhone 8 Plus and iPhone X, respectively, a situation that would obviously be bullish for average selling prices. 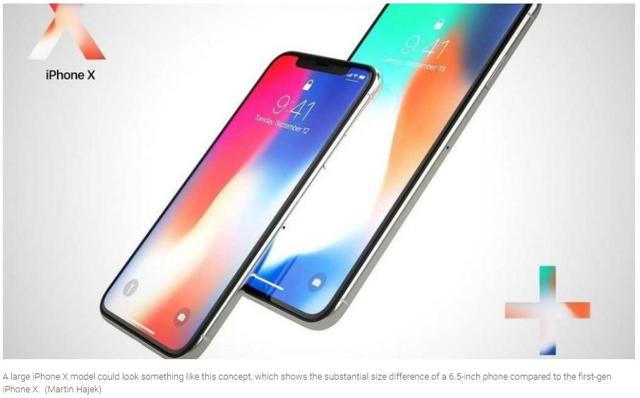 This past fall, Apple made a decision to keep an extra generation of iPhone around, the 6s line, which currently starts at $449. By eliminating that extra generation, this year we would only have the iPhone 8 line and the X and new devices, meaning the most discounted version would likely be $599. However, let's assume Apple keeps the 7 line around. Because the 7 Plus got a price raise and then the 8 line had a raise over its predecessors, Apple might not discount the 7 line as much, especially if we have new phones this year that start at $899 and higher. Apple could drop the iPhone 7 to $499, which would be $50 more than the iPhone 6 line goes for.

Interestingly enough, a decision on a separate product line could also influence this decision. If Apple management decides that the iPad mini will be discontinued, mostly due to the rise in larger screen smartphones, the company could argue for higher selling prices for these devices. If you are arguing that a person needed a ~5 inch phone screen costing $699 and a ~8 inch tablet costing $379, why not just buy a 6.5 inch smartphone instead?

With consumers not having to spend on the tablet, they have more money to spend on their phones. We also have the impact of global growth, with the IMF recently upping its growth forecast from 3.7% to 3.9% for both this year and next. In the US, for example, tax cuts are likely to boost consumer spending, which could improve sales mix towards more expensive devices. Also, surging growth in emerging economies or populous countries like India could lead to more iPhone sales growth from low market share levels it currently has.

There have been many arguments out there that the iPhone X's starting price of $999 has hurt demand for the phone, leading to questions of peaking average selling prices for the smartphone. However, rumored changes to the device lineup could actually provide even more ASP gains. The elimination of a small screen device or not selling an extra older generation are just two examples that could impact ASPs. With economies improving around the globe, do you think it is possible Apple could top the $800 level for iPhone ASPs at some point in the future, or do you think we have seen a peak? I look forward to your thoughts below.

Bill Maurer
32.5K Followers
I am a market enthusiast and part-time trader. I started writing for Seeking Alpha in 2011, and it has been a tremendous opportunity and learning experience. I have been interested in the markets since elementary school, and hope to pursue a career in the investment management industry. I have been active in the markets for several years, and am primarily focused on long/short equities. I hold a Bachelor of Science Degree from Lehigh University, where I double majored in Finance and Accounting, with a minor in History. My major track focused on Investments and Financial Analysis. While at Lehigh, I was the Head Portfolio Manager of the Investment Management Group, a student group that manages three portfolios, one long/short and two long only. I have had two internships, one a summer internship at a large bank, and another helping to manage the Lehigh University Endowment for nearly a year. Disclaimer: Bill reminds investors to always do their own due diligence on any investment, and to consult their own financial adviser or representative when necessary. Any material provided is intended as general information only, and should not be considered or relied upon as a formal investment recommendation.
Follow