The purpose of this article is to show how a scenario is developing that will see the Aussie dollar fall from its present relatively high levels against most other currencies.

The Aussie dollar has been strengthening against the USD since 2016 as the chart below shows. 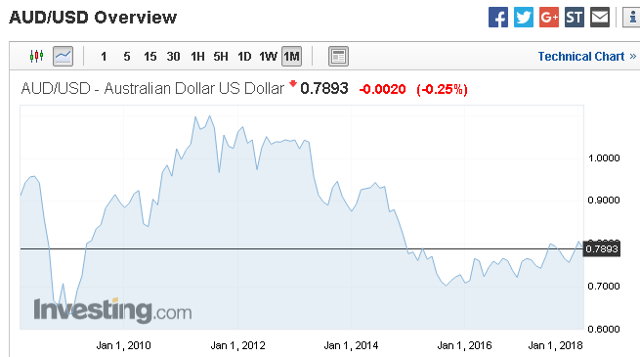 This is a simple supply story. At present, there are a lot of US dollars being created, and this is covered in this article in detail.

The Australian Government has recently announced plans to introduce Trump-style tax cuts estimated at a value of AU$65B, US$51B. This is about 4% of GDP.

What this means, similar to the American experience, is that more Aussie dollars are going to be created and added to the stock of Aussie dollars in the world. AU$65B of them.

I cover the new Australian budget proposal and its impact on investment markets and the national accounts in this recent article.

Similar to America, Australia has:

1. A government deficit that is adding new dollars to the economy.

2. A current account deficit that is adding dollars to the stock of dollars in the world economy that it exchanges for goods and services.

3. A private banking sector that is adding credit dollars to the economy.

4. A central bank intent on raising the interest rate which will mean the government will pay more interest on its government bonds which also adds extra dollars to the economy. The table below shows how much this could be over a range of interest rates. The present rate is 1.5%.

(Source: Trading Economics dot come with calculations by the author)

The table below shows the flow rate of new dollar creation in terms of percentage GDP and dollars from private credit creation, government spending, and the current account.

This can be shown mathematically by the following formula:

When we take our numbers and plug them into our formula, we get the following result:

(Source: Trading Economics and Author calculations based on same)

*Estimate until actual figures are reported.

#Forecast based on present trends and plans.

The reduction in the supply of total Aussie dollars in 2017 goes some way to explain its rise against the USD in that year. A trend that is about to reverse.

In 2018, the supply of new Aussie dollars hitting the world is going to expand by 30.5% over what it was in 2017. This could well be more, if the supply of state money increases, it might inspire more private credit to be created and also more imports that will export Aussie dollars overseas and add them to international stocks.

A central bank rate rise will also put more Aussie dollars into circulation by virtue of increased interest income to the private sector from government bonds. This too might be leveraged with credit money and exported overseas through imports.

How to Play This

Here, we have the situation where America and Australia are both expanding their respective supply of dollars in the same way with the exception that Australia plans adding proportionately more dollars than America.

In this situation, the Aussie dollar will fall faster than the USD all other things equal. The problem is both are falling.

This best trade is one against a currency that is in decreasing supply and so moving in the opposite direction. The best example that comes to mind is the euro that I cover in this recent article.

In this instance, the EU is removing currency from circulation while America and Australia are adding currency. One could well imagine that the present euro appreciation will accelerate soon against the Aussie when the impact of the Australian tax cuts begins to impact the supply of Aussie dollars.

It will be interesting to see just how strong the euro rises and the difficulty this will cause the EU with its export-oriented development strategy. Will it too start adding currency into circulation to lower the value of the euro and make EU exports more competitive?

At present, this seems unlikely given that fiscal expansion is restricted via a tight corset of self-imposed legal restrictions known as the Fiscal Compact. Each land is compelled to keep its deficit spending to no more than 3% of GDP and its total government debt stock at no more than 60% of GDP. Almost no member land is in compliance with this requirement, and there is certainly no discretionary room to expand either measure. It is a system that cannot work and will implode at some stage.

Member lands that break the Fiscal Compact rules can be fined for non-compliance.

Having ruled out fiscal expansion in the Eurozone one is left with the other options that have been used up until now:

1. Internal devaluation - A euphemism for reducing the demand for imports by taking away the domestic population's spending power via wage cuts, unemployment, high taxes, and mandatory non-tax wage deductions such as health, pension, and aged care payments.

2. More austerity to lift the internal cost of business by producing more expensive business and living conditions over time via not investing in public education, health, and infrastructure. Future workers are less well-educated, less healthy, and business and household life are conducted over worn-out public infrastructure with lots of bottlenecks and delays. Income lost to inefficiency and reduced productivity cannot be spent on imports, and so this drives the currency down.

3. Privatisation of more public infrastructure to lift the cost of living and doing business via the addition of user fees to cover operating costs, debt burden, and shareholder profit margin. This raises costs in the economy which then removes income that could have been spent on imports that might have driven the currency value up.

The trigger for this trade is the passing of the new budget through the Australian Parliament. Once it is law, then the fiscal flows start as do the changes in expectations and behavior.

The local stock market will also get a boost from:

1. The addition of AU$65B of state money income per year.

3. A lower exchange rate will crimp imports and leave more dollars in the domestic economy.

Possible ETFs for Investors to Use

An investor can trade this situation via the following ETFs:

Alan Longbon
2.35K Followers
My investment approach is very simple. I find countries with the highest and strongest macro-fiscal flows and low levels of private debt and invest in them using country ETFs and contract for difference (CFDs)I use functional finance and sectoral flow analysis of the national accounts of the nations I invest in. This is after the work of Professors Wynne Godley, Micheal Hudson, Steve Keen, and William Mitchell. Roger Malcolm Mitchell, Warren Mosler, Robert P Balan, and many others.One can analyze a country in seconds with four numbers as a % of GDP and these are G P X C where[G] Federal spending.[P] Non-Federal Spending.[X] Net Exports[C] CreditOne can then derive a set of accounting identities that are correct by definition.GDP = G + P + XAggregate Demand = G + P + X + C or GDP + Credit.GDP = GDIG and X are regularly reported in official national account statistics and one can work out P as follows:P = G + XAsset prices rise best where the macro-fiscal flows are strongest and where the private sector balance is highest.The 20-year land/credit cycle identified by Fred Harrison and Phillip Anderson is also a key investment framework that I take into account.
Follow