Editor's note: Seeking Alpha is proud to welcome Kirill Savrassov as a new contributor. It's easy to become a Seeking Alpha contributor and earn money for your best investment ideas. Active contributors also get free access to the SA PRO archive. Click here to find out more »

Catastrophe bonds, also known by their abbreviation as (CAT) bonds, fall into the broader category of Insurance Linked Securities (ILS), which is financial instruments, that transfers certain types of insurance risk from the insurance to the capital markets, where the risk is spread among investors.

Additionally, Catastrophe Bonds characterized by a high level of intra-class diversification given by their correlation to different and independent risk factors arising in different parts of the world.

Over the last 15 years, Catastrophe Bonds, as core Insurance-Linked Securities instrument, have yielded very steady returns, only suffering mild volatility, also during difficult market conditions such as the occurrence of hurricanes and earthquakes.

An obvious and important question is Catastrophe Bonds performance in 2H 2017 following an unprecedented market loss (approx. US$130 bln) due to Harvey, Irma & Maria U.S. hurricanes.

While 2017 is likely to see more impaired cat bonds than any previous year, the total defaults are likely to be a modest proportion of the market, which is a good argument to intra-class diversification and balancing factor of individual investment strategies. There are, as well, plenty of ILS funds, which incurred minimal or no losses at all due to minor exposure to North American perils or invested into bonds with higher triggering attachment points. After all the Swiss Re Total Return index as of 1/01/2018 is in green with 0.47% YTD growth for 2017 year: 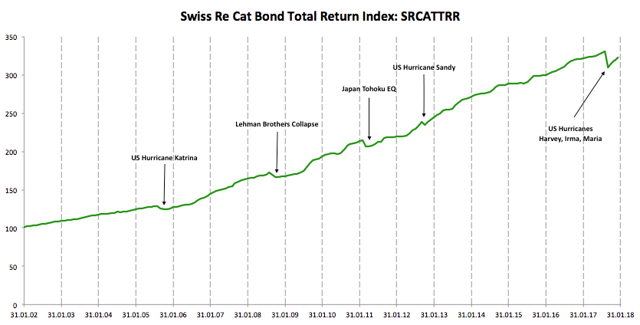 As mentioned, the core instrument in which Insurance-Linked Securities' funds are invested is the Catastrophe Bonds. Typically, such bonds protect insurers, reinsurers and governments against catastrophic events. Their triggers comprise one or more of the following: a) an indemnity trigger based upon the actual loss or reserves carried by the insurer or reinsurer and relating to a particular natural catastrophe; b) an industry loss based upon an index of industry-wide losses arising from a particular event; or c) a parametric trigger based upon the severity of the event such as a storm measured on the Saffir-Simpson scale or an Richter scale registering earthquake.

With recent hurricanes Harvey and Irma hitting US coastal states after devastating Caribbean islands, there is no doubt that Insurance-Linked Securities as an alternative asset class have became a focus for various market participants. In particular, it is used by institutional investors including pension and hedge funds as a mean of diversification as an uncorrelated and relatively stable high-yield returns generating Insurance-Linked Securities has had a disproportionally large U.S. coastal exposure. The occurrence of two significant and similar catastrophic events following a decade in which few hurricanes have made landfall, has been a real 'live' test for alternative capital in the reinsurance industry. 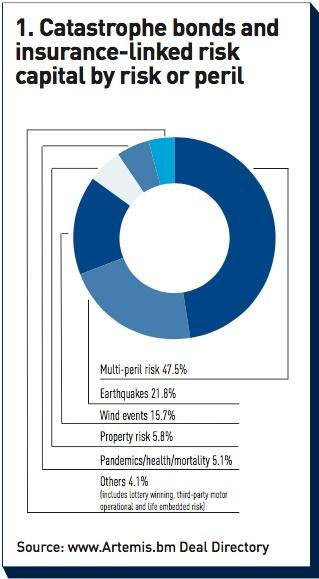 As the Insurance-Linked Securities market is still young, it is hard to overestimate September 2017 as an examination taking the asset class into the new dimension.

Even though early estimates indicate that most Insurance-Linked Securities investors will avoid direct losses, the framework has been properly stress-tested. This testing has included the overall strategies of dedicated Insurance-Linked Securities funds, user models, industry loss attachment points and the live cat bonds market. It has also run to broader questions such as proof of the 'uncorrelation' argument, attitudes of investors towards trapped collateral, and inflow of further past-event capital. It has even considered the protection gap between insured and overall losses recently reiterated by the World Bank with its Mexican, African, Caribbean and Philippines parametric trigger bonds.

Accordingly, there is no doubt that hurricanes Harvey and Irma will be multi-task learning events as hurricane Sandy was in 2012.

The reaction to such events demonstrate the maturity of the sector. It could be considered one of the key trends for capital and reinsurance markets convergence and a future face of catastrophic risk protection.

Insurance-Linked Securities came into being after hurricane Andrew in 1992 when capacity in the reinsurance market was squeezed. It has grown significantly since hurricane Katrina in 2005, the financial crisis of 2008 and new risk-based capital regulatory regimes such as Solvency II introduced by the EU in 2016.

The Insurance-Linked Securities market is flourishing, currently accounting for $90bn (€77bn) of investments. Growth in the market has been strong and the returns good. To an extent, the lack of natural catastrophes in the Gulf of Mexico has assisted returns. That said, the lack of disasters has operated to depress market premiums. Most investors have a sufficient spread of risk to ensure that one loss will leave them with a reasonable return and the prospect of increasing future premiums.

While $90bn is a significant amount and accounts for year-on-year growth over the past decade of up to 10%, it is only a fraction of the investment funds available. The constraint on additional investment is the limit of available investment opportunities rather than the availability of investment funds. 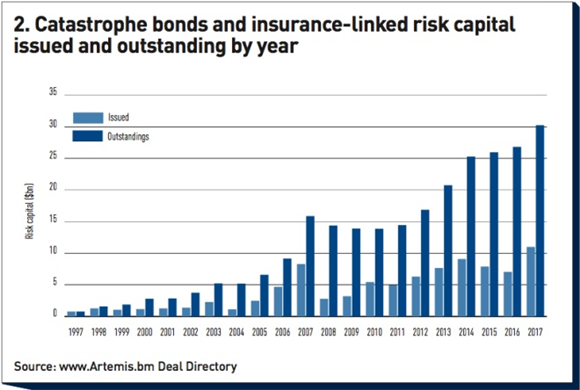 With this in mind, many in the Insurance-Linked Securities sphere have been exploring ways to increase investment opportunities and present further diverse options. The idea is to allow investors to diversify their portfolio not only into Insurance-Linked Securities but also within the asset class. Natural disaster and other insurance-related risk do not correlate. For example, Japanese earthquake risk is uncorrelated to North American wind storm risk.

During this search for risk opportunities an urgent need for protection has emerged. Across the world, countries are looking at risks and seeing how these can be protected against and whether the insurance industry alone can bear those risks.

In the U.K., this thinking has led to the development of Pool Re and Flood Re. These are reinsurance companies, funded by the insurance industry which have the government as the reinsurer of last resort to provide protection against terrorist risk and flood risk.

In other jurisdictions, governments or quasi-governmental entities have underwritten storm and earthquake risk. The goal is to ensure that the population and commerce is protected in circumstances where the insurance industry is either not sizeable enough to cope or cannot offer terms at affordable rates. Many of these solutions utilize Insurance-Linked Securities products.

But in some jurisdictions, insurance-based solutions simply will not work because insurance penetration is too low.

In the U.S., when hurricane Sandy hit in 2012, only half of the economic loss was insured and yet the influx of insurance receipts kick-started the economy of the region which had been dormant since the financial crisis. Shortly afterwards a bigger storm hit the Philippines where less than 1% of the loss was insured. The result was devastation, economic as well as physical.

With economies developing and growing, more parts of the world now have greater economic exposure to natural disaster. Urbanisation adds to this challenge. Insurance penetration, however, historically, lags behind economic growth. The consequence is that many fast-growing economies are woefully exposed to the economic threat of natural disasters. It also means that insurance solutions are not the most practical ones.

Russia is one such country. Insurance penetration in Russia stands at between 1.3-1.4%. It is exposed to several natural perils including wild fires, floods and upon its Pacific seaboard, typhoons. An event could cause significant destruction, human dislocation and economic disruption.

Without insurance, the state finds itself obliged, politically if not legally, to offer relief and reconstruction. It cannot insure against these events without an insurable interest in the underlying risk and without a legal obligation to protect the population, it has no insurable interest. In any event, an insurance solution would require loss adjustment and attendant delay. Money would simply not be available for emergency relief.

Of course, the government could self-insure. This would however, lead to a budgetary crisis should an event occur before the necessary reserve was established.

A better solution exists through Insurance-Linked Securities. While these solutions have, until now, been aimed at insurers and reinsurers, there is no reason why they cannot protect companies, individuals or governments. For Russia, they present the perfect solution to the question of coping with natural disasters in a growing economy.

Catastrophe Bonds, based on parametric triggers, could provide the Russian government with a means of providing for relief after a disaster and spreading these costs over several budget years. For investors, Russian Catastrophe Bonds, would provide an uncorrelated asset class in which the intermediaries and frictional cost of insurers and reinsurers have been stripped out.

Insurance-Linked Securities offers a solution to both investors and governments.