Consolidation in the semiconductor metrology/inspection market has reduced the number of competitors from 37 in 2002 to 20 in 2017. In these past 15 years, this consolidation has moved just five companies to market dominance.

According to The Information Network's report "Metrology, Inspection, and Process Control in VLSI Manufacturing" (www.theinformationnet.com), the top five metrology/inspection suppliers were KLA-Tencor (KLAC), Applied Materials (AMAT), Hitachi High Tech, Nanometrics (NANO), and Rudolph Technologies (RTEC). These five companies increased their collective share of the overall global market to 87.0% in 2017, up from 82.4% in 2016. In 2002, the top five companies held a 75.3% share among 37 companies. 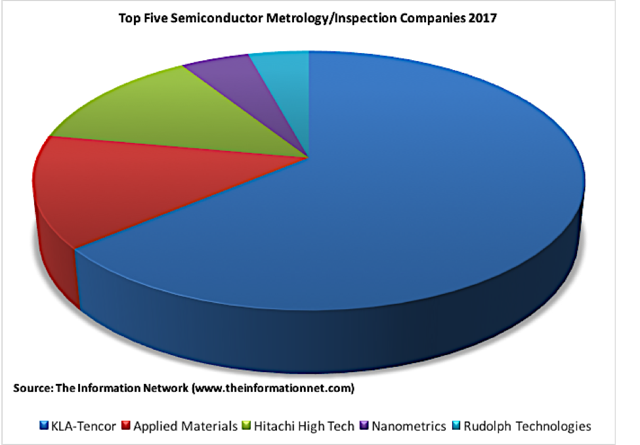 The report, which covers 27 different sectors and subsectors, reports that

Rick Wallace, president and CEO of KLAC, reported at the company's Q2 2018 earnings call, that:

"Orders for KLA-Tencor equipment from native Chinese customers nearly tripled in 2017 and this strong momentum is expected to continue into 2018.

Memory was 71% of shipments. Demand was roughly evenly split between DRAM and NAND."

Michael Plisinski, CEO of RTEC, in the company's 4Q2017 earnings call reported that

"China continues to be a strong focus for Rudolph Technologies. Revenue from China has more than doubled in the last two years. Rudolph's revenue from advanced memory applications in both three DRAM and 3D NAND grew by 80% year-over-year as customers in Korea increased capacity to meet growing global demand for advanced memory used in cloud computing and mobile applications."

I discussed in a February 21, 2017 Seeking Alpha article entitled "China's Semiconductor Surge: What Investors Need To Know," that:

"Massive investments in Mainland China are finally showing benefits as the ratio of integrated circuits made in China versus those imported into China increased from 27.0% in 2015 to 29.1% in 2016, according to The Information Network's report entitled "Mainland China's Semiconductor and Equipment Markets: A Complete Analysis of the Technical, Economic, and Political Issues."

In 2018, the memory sector is forecast to grow another 9.3%, ahead of all sectors. Because of supply-demand dynamics, new fabs are being built in 2018 to increase supply, thereby enhancing semiconductor equipment purchases over 2017.

In addition to traditional DRAM and NAND manufacturers, which will build or expand their memory capacity, three new fabs being built in China, and construction scheduling is accelerating. Fijian's Jinhua Integrated Circuit plant is slated to finish the construction of its key plant structure in October this year. Wuhan-based YMTC is investing a total of US$24 billion in building three large-sized 3D NAND flash manufacturing plants. Its No. 1 plant is set for an official run in 2018, with a monthly production capacity of 300,000 wafers. Finally, Hefei-based Rui-Li IC is actively placing orders with suppliers for a variety of DRAM manufacturing equipment and is expected to take delivery of the first batch of advanced lithography machines by the end of 2017 with the majority in 2018.

So why are market shares important? I noted in a January 4, 2018 Seeking Alpha article entitled "The Meteoric Rise In Semiconductor Equipment Stocks Should Moderate In 2018," that

"Semiconductor companies purchase what's called "best-of-breed" equipment because of price/performance. These machines cost many millions of dollars each and many are purchased in a fab to equalize the throughput of wafers per hour. But there are several nuances involved in a purchase. If it is to increase capacity, a semiconductor company will invariably buy more of the same equipment it is already using.

However, if it is a technology purchase, such as moving to a smaller linewidth node, then an intense internal evaluation begins within the chipmaker to find the best equipment to do the job. Not all equipment in a fab is replaced, just equipment to process the critical changes at smaller feature sizes for the updated chip.

Ultimately these technology purchases will become capacity purchases as the semiconductor manufacturer ramps up production. When that happens, more of each type of equipment is purchased. Thus, an equipment company with a technologically-advanced processing tool will further increase market share through the production lifetime of the new node at the chipmaker. This historically would happen every 2-3 years as the chipmakers followed Moore's Law."