Libor (London Inter-Bank Offered Rate) is the average interest rate estimated by each of the lending banks in London that it would be charged were it to borrow from other banks. As short-term interest rates rise, of course, the overnight rate will rise as well. A rising Libor rate is two-fold, however. A rising Libor rate can also indicate tightening credit and liquidity conditions. Banks are less willing to lend out overnight loans as market risks elevate. 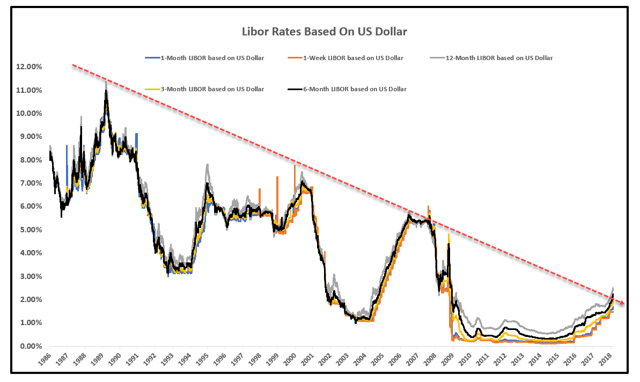 Each economic cycle shows a lower peak in Libor rates, similar to the Federal Funds rates, the 10-year Treasury rates, the nominal GDP growth rate and the inflation rate. All of these factors are correlated.

As the chart below shows, the Libor rates are at the highest since 2008. 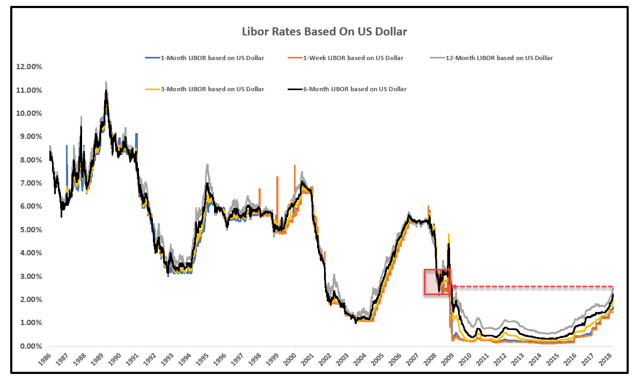 The major issue with rising Libor rates is the increased debt service cost incurred by loans linked to Libor. The Telegraph reported that "A third of all US business loans are linked to Libor, as are most student loans, and 90pc of the leveraged loan market."

With an economy overloaded with debts, most of which are linked to Libor, it is not surprising that a rise in Libor rates and short-term interest rates precedes the end of each economic cycle. Libor rates and short-term interest rates rise, causing debt-service payments to increase at the end of a business cycle. Debt service payments end up growing faster than income and defaults occur, triggering the end of the business cycle.

Each economic cycle ends with a lower terminal rate in both Libor and short-term Treasuries, including the Federal Funds rates, because as aggregate economic debt increases in nominal terms, it takes lower interest rates to create a rapid acceleration in debt service payments. In other words, the economy is leveraged to short-term interest rates, given the percentage of loans linked to Libor as stated above.

The four critical sectors of the economy - Federal Government, State & Local, Household, and Corporate - have an aggregate $70 trillion of debt. This is an increase of roughly $20 trillion from the last recession, i.e., the $50 trillion level of 2008.

In terms of GDP, total debt has risen to a staggering 370% of GDP. (Still lower than Europe, China, and Japan, but that is a topic for another day.)

Total US Debt To GDP: 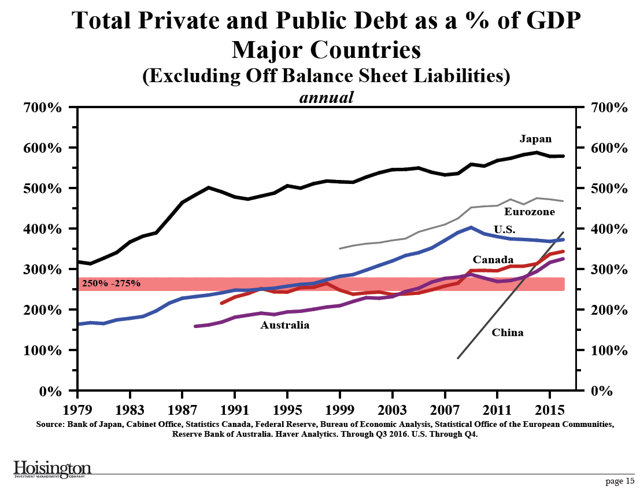 A rise in interest rates on $70 trillion of total debt works out to be a very material hit to disposable income.

The rise in short-term interest rates will have a much more severe economic impact than most investors believe due to the level of indebtedness in the economy.

Of course, these are very rough estimates and not exact at all but the impact to national income is vastly underestimated by the market at this time. The market, for this reason, is also overestimating growth expectations. By the second half of 2018, when the economy is hit with a $500 billion (or so) increase in annual debt payments, growth will contract materially. 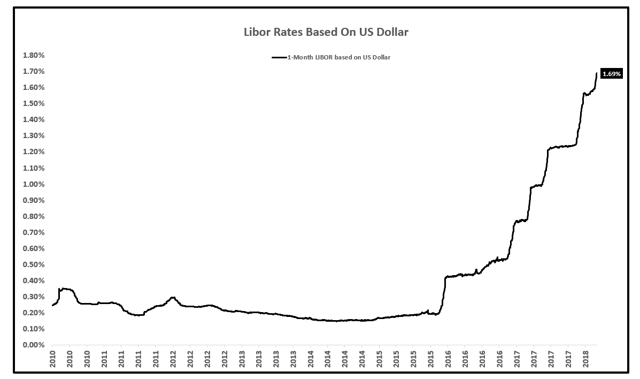 The 1-month Libor rates have surged along with short-term treasury rates from roughly 20 basis points to nearly 1.70%. 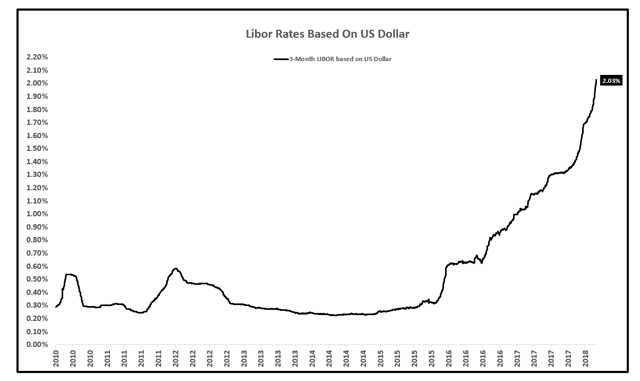 The 3-month Libor rates have soared north of 2% from roughly 0.30% just two years ago. 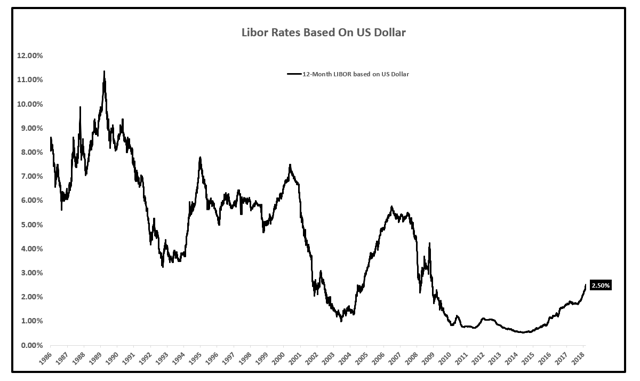 I believe the market is dramatically underestimating the impact of rising short-term rates given the level of economic debt. The rise in interest rates, due to the debt level, will have a much more severe negative impact on growth, income, and consumption than the tax cut will help. In this case, the debt outweighs the tax cuts.

Again, I point out the lower highs in the 1-year Libor trendline below. Is this the peak in rates? It would make sense that once the economy has one round of annual payments at these rates, given the level of debt, that growth slows materially enough to warrant a halt in the rise of short-term rates. 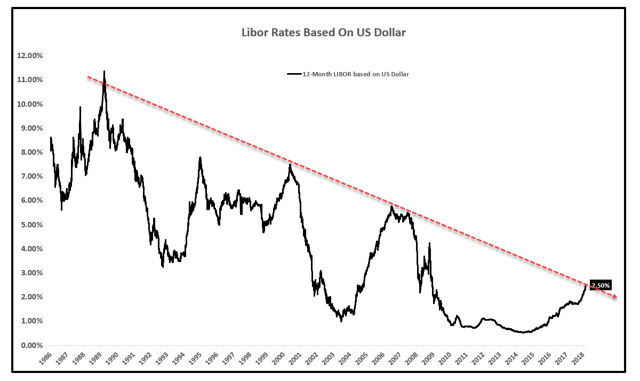 From Wiki to help understand the spread: "The LIBOR–OIS spread is the difference between LIBOR and the OIS rates. The spread between the two rates is considered to be a measure of the health of the banking system.[3] It is an important measure of risk and liquidity in the money market,[4] considered by many, including former US Federal Reserve chairman Alan Greenspan, to be a strong indicator for the relative stress in the money markets.[5] A higher spread (high Libor) is typically interpreted as an indication of a decreased willingness to lend by major banks, while a lower spread indicates higher liquidity in the market. As such, the spread can be viewed as an indication of banks' perception of the creditworthiness of other financial institutions and the general availability of funds for lending purposes.[6]" CLICK HERE 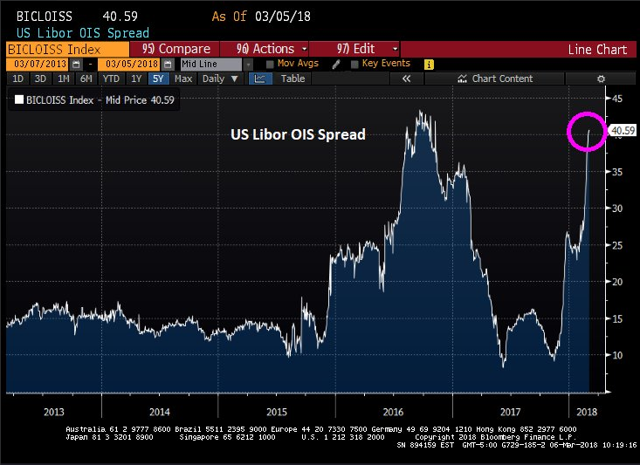 The Libor-OIS spread has risen to the highest level since the Chinese currency devaluation which roiled markets back in 2016. Why is the spread rising today? Typically, a rising Libor-OIS spread is indicative of heightened economic or systemic risk.

I have outlined in many recent articles that I believe the US economy is slowing, which is entirely consistent with a rising Libor-OIS spread, rising credit spreads, decreased bank lending growth, falling money supply growth (M2), and a flattening yield curve, all of which are occurring today.

In my past articles, click here and here for my two latest, you can see the data behind the many indicators that corroborate the growth-slowing view.

The market is severely underestimating the risk of rising interest rates in an overindebted economy along with many growth slowing indicators flashing red.

Some have argued that the rising Libor-OIS spread is due to a dollar shortage, linked to tax repatriation from the new tax code. While this may be possible, it would not explain the dozens of other factors that are also indicating growth slowing and heightened risk for recession towards the end of 2018 and beginning of 2019.

It is my view that the rising Libor rates and the increasing Libor-OIS spread are a result of the reduction in liquidity and tighter credit conditions by the Federal Reserve in conjunction with a slowing economy. The near-term risk in the market is rising.

Disclosure: I am/we are long SPY, TLT, IEF, SHV, GLD. I wrote this article myself, and it expresses my own opinions. I am not receiving compensation for it (other than from Seeking Alpha). I have no business relationship with any company whose stock is mentioned in this article.