The Canadian dollar has posted slight losses in the Friday session. Currently, USD/CAD is trading at 1.3091, up 0.29% on the day. On the release front, there are key indicators on both sides of the border. Canada releases Manufacturing Sales, with the markets braced for a sharp decline of 0.8%. In the US, major indicators are also expected to miss expectations. Building Permits and Housing Starts are forecast to drop to 1.32 million and 1.29 million respectively. The markets are also bracing for a drop in UoM Consumer Sentiment, which is expected to slow to 99.2 points. Traders should be prepared for some movement from USD/CAD during the North American session.

It continues to be a rough week for the Canadian dollar, which has lost 2.0% against its US counterpart. USD/CAD is headed towards the 1.31 level, as the Canadian currency is at its lowest level since late June. If Canadian Manufacturing Sales misses expectations, the slide could continue. As a minor currency, the Canadian dollar is under strong pressure, as risk appetite has waned due to two major geo-political hotspots. First, relations between the UK and Russia have nosedived after a toxic attack in London aimed against a former Russian intelligence officer was poisoned, and the UK has laid the blame on the Kremlin. The May government has ordered the expulsion of 23 Russian diplomats, and Russia is sure to retaliate. As well, President Trump has slapped tariffs on steel, and this could trigger a response from the EU and China. Although Canada was exempted from the tariffs, this could prove temporary, and the threat of a global trade war is not good news for Canada. Added to this mix is rising uncertainty over the NAFTA agreement. The US is demanding far-reaching concessions from Canada and Mexico, and the protectionist Trump administration could decide to exit NAFTA, which has been a key driver of economic growth for Canada. With the Federal Reserve poised to raise interest rates next week for the first time this year, the fragile Canadian dollar is looking at more headwinds.

*All release times are GMT

*Key events are in bold 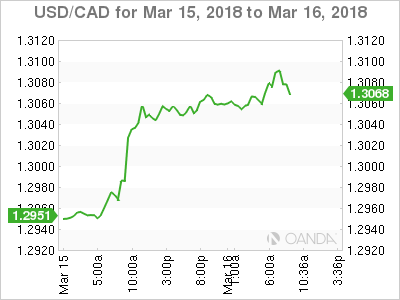 Further levels in both directions:

USD/CAD ratio is unchanged in the Friday session. Currently, short positions have a majority (63%), indicative of trader bias towards USD/CAD reversing directions and moving lower.