The European financial system, despite some improvements, remains rotten at the core and is a danger to many of the Continent’s national economies.

How can that be ten years after the onset of the last crisis and after so many legislative and regulatory changes? Alas, it is because the basic political philosophy has not changed.

I hesitate to hold up the American financial system as a model for the world because it has so many flaws. But the flaws in the U.S. system are minor compared with the European system’s defects.

Good financial regulation has to begin from the premise that banks are naturally fragile and bank managements have incentives to make them as fragile as possible. Indeed, the fundamental uses of banks to perform liquidity and maturity transformation are dangerous—and perhaps even should be outlawed, not encouraged. These common features of commercial banking naturally lead to inadequate capital and, in hard times, to runs on deposits and other short-term liabilities. (I discussed the generic problem here.)

The common regulatory paradigm for dealing with these defects is to establish regulatory capital requirements that will prevent the banks from becoming close to failure in hard economic times when losses on portfolio loans naturally increase no matter how diligent the bank may have been in the good times. And since it is the apparent lack of adequate capital that leads to banks runs, maintaining adequate capital is the linchpin of prudential regulation.

But maintaining adequate capital must be forward-looking, not based on historical financial statements, and it must include adequate provision for potential loan losses. (See Instability, my 2017 book—available for five bucks on Amazon—for the detailed explanation of why forward-looking capital and adequate provision for potential loan losses are essential tenets of bank regulation.) The U.S. regulatory regime is now firmly based on these principles—and one hopes that they will not be watered down by the Trump Administration and a poorly informed Congress.

Europe has recognized the fundamental importance of neither of these two pillars, though it pays lip service to both. (See my seeking alpha articles here and here.) Indeed, the most recent regulatory guidance that pretends to be stringent actually is a laughable attempt to bring the trillion-euro bad loan problem under control. Now, ten years after the crisis, the regulatory apparatus is giving European banks another seven or eight years to take adequate provisions for embedded losses. For details, see the recent opinion piece by an Italian correspondent on Bloomberg.com here. The failure to take more forceful action leaves many banks in the southern countries inadequately capitalized, and they will fail when the next round of loan defaults arrives, as it inevitably will. It would be better for them to have to raise expensive capital in the good times—now—instead of staggering along until the bad times, when they will be unable to raise capital at any price.

In order for the European regulatory authorities to become emboldened, it probably is necessary to institute a deposit insurance fund for the euro area in general. That has been obvious for at least five years (I wrote about it on seeking alpha back then), but German authorities have been unwilling to participate.

Without adequate capital, banks cannot play a useful role in the economic lives of their countries.

Too much reliance on banks

But Europe also relies too much on its banks to provide capital to businesses and consumers. The following four graphs (from the recent Financial Stability Board study of global liquidity linked below--Annex 1) show (red line) the continuing dependence on banks finance in France, Germany, Italy and Spain 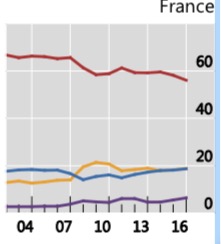 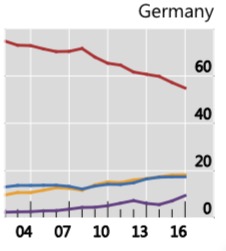 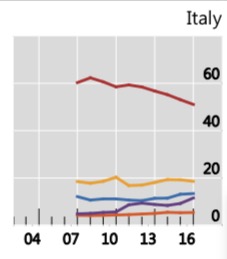 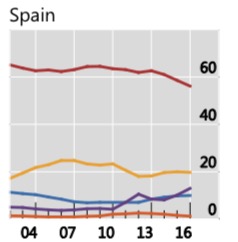 By contrast the following graphs shows how diversified the U.S. sources are (banking is still the red line, but here about 25%, as opposed to over 50% in the large European nations): 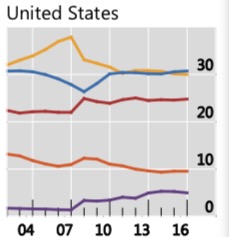 Capital markets often provide a better way to provide both debt and equity finance. An intermediary that does not hold the loans that it creates is a safer intermediary. That may sound surprising in light of the history of investment bank failures, including the major failures of Bear Stearns and Lehman Brothers in 2008. But the fact is that, at least in the U.S., securities dealers fail only for one of two reasons: Fraud or proprietary trading portfolios. Small firms fail because of fraud. Large firms fail because they are not satisfied with the money they make from investment banking and therefore become punters themselves. (See my discussion with James W. Giddens, the best authority on brokerage firm failures, in Instability.) Speculating with borrowed money—especially with money borrowed short-term, like Bear Stearns—is a recipe for an eventual run on the bank. (Yes, I do understand that they call it trading, not speculation, but it remains speculation unless they are trading against their customers.)

European policy has not embraced the capital markets idea. And to the extent that it has, it has permitted Luxembourg and other tax havens to engage in policies of secrecy that permit the build-up of concealed liquidity threats. See the global Financial Stability Board’s recent report on liquidity here.

A change in political philosophy is needed

Europe simply must change its underlying political philosophy of finance if it wants to avoid a repeat of financial crisis in the next significant recession. For that reason, although European economies are booming, as an investor I am very cautious about trying to participate in the benefits of that renewed prosperity.

Martin Lowy
1.28K Followers
I was trained as a lawyer and practiced in the fields of corporate law and bank regulation in large U.S. firms for 20 years, then decided to do other things. My career has included banking and being an entrepreneur. For seven years I was CEO of a high-tech sports business. I have retired from active business and spend full-time writing, mostly on economic subjects. My books include: InStAbILItY: Booms, Busts, the Fragility of Banks, And What To Do about It 2017 High Rollers: Inside the S and L Debacle (1991) Debt Spiral: How Credit Failed Capitalism (2009) Practical Handbook for Bank Directors (1995), second edition due 2012 Corporate Governance for Public Company Directors (2003) Capitalism for Democrats (2019) Capitalism for America (2019)