While the greenback was experiencing a sell-off, the Japanese yen kept getting stronger. Both the Fed commenting decisively on making 3, not 4, rate hikes this year, and then Mr. Trump's 'trading wars' sent the US dollar lower and supported the Japanese currency. In this light, the yen claimed again its safe-haven status.

However, over the last two trading sessions, in spite of the dollar still getting worse against other majors, the yen is falling, too. On the one hand, a technical factor has much weight on it, as the last upside impulse led the yen to its high since November 9, 2016, and now the time has come for a correction. On the other hand, news coming from Japan and those related to it make the investors think geopolitical situation is not that bad.

Thus, there have been some talks around the new round of negotiations between the US and the Land of the Rising Sun regarding the trade conditions. After President Trump imposed customs duties on Chinese goods last week, it was clear the next country to have the same issues with the US was going to be Japan. The reason for Trump making these decisions is understandable: he is taking every attempt to protect the internal US market, making it so that the businesses may not depend on the competition and start working in a more active and efficient way. The Asian countries are, of course, not fond of such a policy.

Now, however, the US is not likely to impose severe limits on Japanese goods before talking this over with the government. This will allow Japan to take both some relevant moves and time to elaborate adequate response.

As for the internal Japanese news, the scandal around Prime Minister Shinzo Abe's wife and land plots is still here to stay. Still, there's some info that tamps down tensions: as Mr. Sagawa, the former head of the Japanese tax service, says, Prime Minister Abe has nothing to do with those land plot documents and did not give any related tasks to his officials. This is actually a warranty of the fact that the Prime Minister really had nothing to do with that notable case. Still, Abe's rating fell drastically over the last few weeks, which does have influence on the Cabinet's performance.

Over the last few days, the descending USD/JPY trend formed a new important low, but the momentum is fading out, which may signal a pullback. Technically, on H4, the price is inside a mid-term downside channel. Short term, the yen is also trading in a descending range. Still, after the major channel support has been tested, the price is heading higher and forming a new upside impulse to reach the upper short-term descending channel boundary at 106.15. If this level gets broken out, the price may head forward to the major channel resistance at around 106.75. Reaching this level may actually become a stress test for the dominating downtrend. If the price manages to break out the resistance, it may go even further to the upper projection channel to reach its resistance at 108.50. This may also issue a long-term trend reversal signal. Conversely, if the price fails to break out the resistance and pulls back, it may come back to the current support at 104.70. 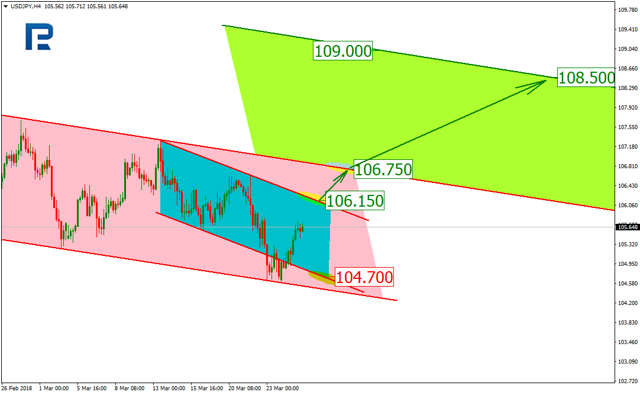 Dmitriy Gurkovskiy
17 Followers
I have a Masters Degree in Finance from London School of Economics and Political Science, and a Masters Degree in Social Psychology from National Technical University of Ukraine. After receiving postgraduate degree, I began working as the Head of Laboratory of Technical and Fundamental Analysis of Financial Markets at the International Institute of Applied Systems Analysis. The experience and skills I gained helped me to implement my potential as trader analyst and portfolio manager in an investment company. At the moment I'm a financial expert, writing for various financial media sources and hold the position of a Chief Analyst at RoboForex.
Follow