Editor's note: Seeking Alpha is proud to welcome Watchman as a new contributor. It's easy to become a Seeking Alpha contributor and earn money for your best investment ideas. Active contributors also get free access to the SA PRO archive. Click here to find out more »

What Was Wrong with The Economist’s Forecast? 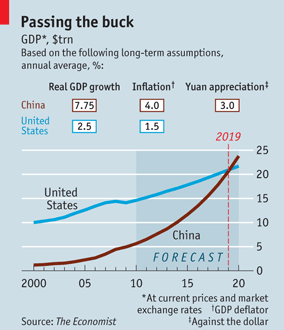 However, China’s GDP would not exceed the U.S.’ by next year. Currently, the U.S.’ GDP is $18.6 trillion and China’s is $11.2 trillion. What was wrong with The Economist’s forecast? The yuan has depreciated against dollar, according to CIA’s The Word Factbook, from 2013 to 2017 (See below chart. Source: The World Factbook). Also, China’s GDP growth rate has been below 7.0% since 2015. 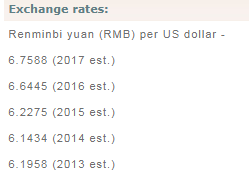 (On the other hand, The Economist’s forecast would be reasonable. The World Factbook reports China’s GDP in purchasing power parity in 2017 was $23.1 trillion, which surpassed the US’s $19.4 trillion in 2017. The World Factbook reports that “…because China’s exchange rate is determined by fiat rather than by market forces, the official exchange rate measure of GDP is not an accurate measure of China’s output; GDP at the official exchange rate substantially understates the actual level of China’s output vis-à-vis the rest of the world; in China’s situation, GDP at purchasing power parity provides the best measure for comparing output across countries.” In other words, China’s real purchasing power to buy goods and services has already surpassed the U.S.’)

In 2017, Bloomberg's article predicted that China’s GDP would surpass the U.S.’ by 2028 (See below chart. Source: Bloomberg). 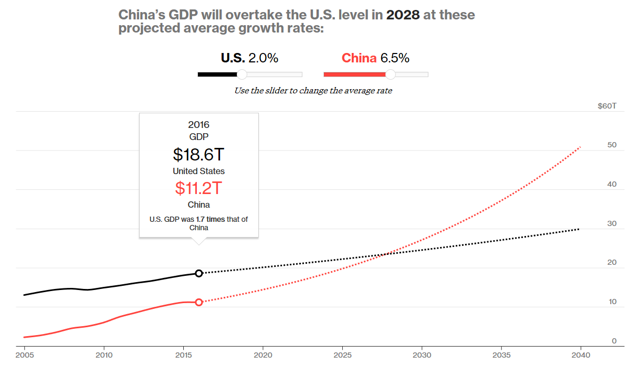 China’s biggest problem is its demographic shift. Total Dependency Ratio, which represents the number of dependents per 100 working-age population aged 19-59, is rising in China (See below formula and chart).

(Please note that all total dependency ratios in this article used above formula.) 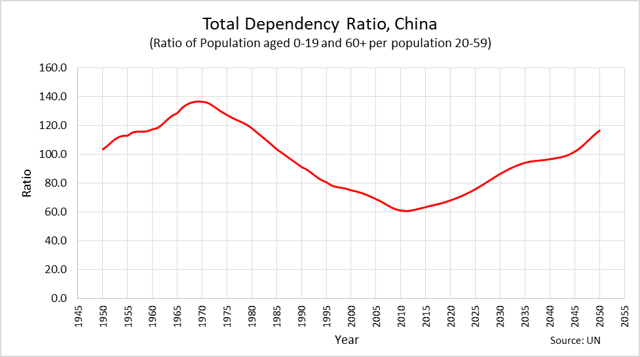 The above chart shows the total dependency ratio of China from 1950 to 2050.

China is facing demographic crisis. Currently, China’s retirement age is 60 years old. From 2021 to 2036, 346 million working-age population will retire. At the same period, only 249 million younger generation workers will replace the 346 million retirees (See below chart). China’s workforce will decrease by 100 million between 2021 and 2036. The shrinkage of workforce will cause wage appreciation, which will decrease the margin for manufacturers and exporters. The low-cost huge workforce was China’s competitive advantage, which is fading away. 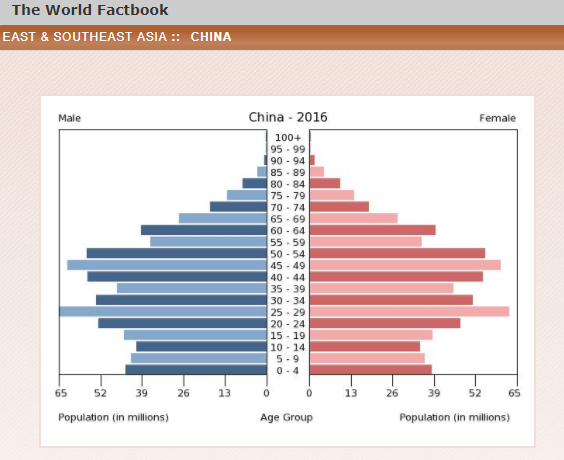 Medical and pension expenses will rise rapidly to support the retirees. About 844 million people will retire between 2011 and 2050. (See below chart) 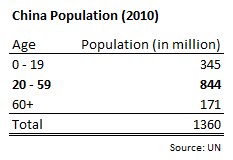 There is no free lunch because someone has to pay for it. China’s retirees have helped the economic growth of China and the world. They deserve to enjoy their retirement. China, either government or household, has to support and pay for the medical and pension expenses for the retirees. It means China must sacrifice its economic growth to support its retirees.

The below chart compares China’s and Japan’s total dependency ratio. 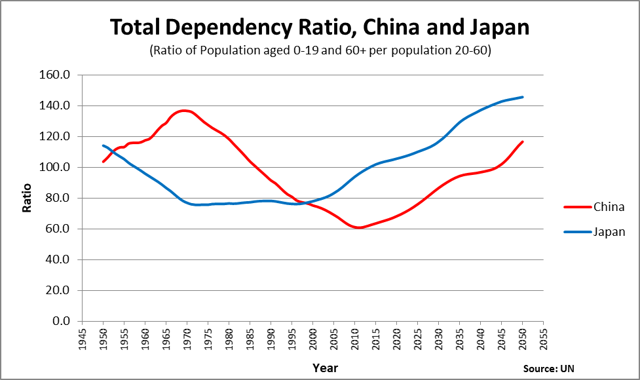 There are two similar characteristics between China’s economic growth model and Japan’s model; export driven and fixed capital investment driven economy. Japan’s economy had grown rapidly from the post-war period to 1970s. Japan’s decreasing dependency ratio was a competitive advantage from 1950 to 1970. Japan had two main economic growth engines; exports and fixed capital investments. Japan had competitive advantage in producing goods in lower prices with a high quality. Japan also had heavily invested in fixed capital, which includes constructing houses, apartments, and infrastructures. Housing prices had increased rapidly as Japan heavily invested in fixed capital so that its GDP had grown quickly. However, Japan’s “developing country catch up period” had expired in 1970s. Japan's fixed capital formation percentage of GDP has decreased as its total dependency ratio had flattened and increased (See below chart). Those two lines on the below chart are inversely related. Japan's highest fixed capital formation percentage of GDP was 37.1% in 1970. Japan could not afford its fixed capital investments because of its demographic shift. Japan’s housing market bubble burst in 1992. 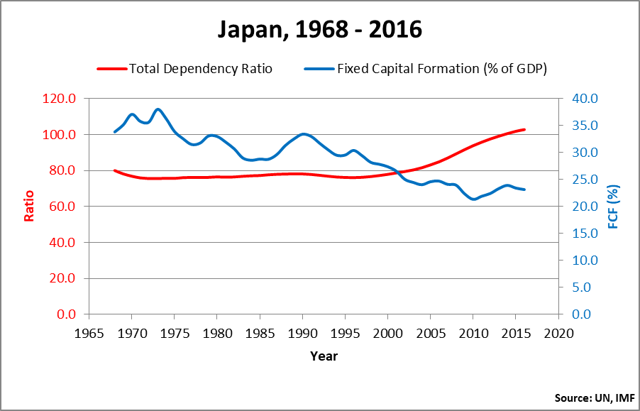 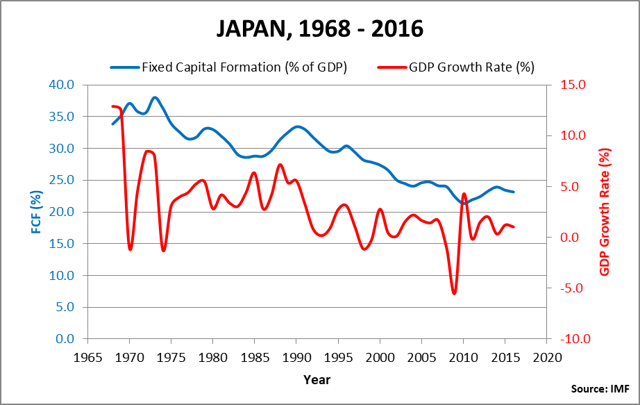 China’s total dependency ratio has gradually decreased and fixed capital formation percentage of GDP has gradually increased from 1968 to 2010 (See below chart). Those two lines on the below chart are inversely related. 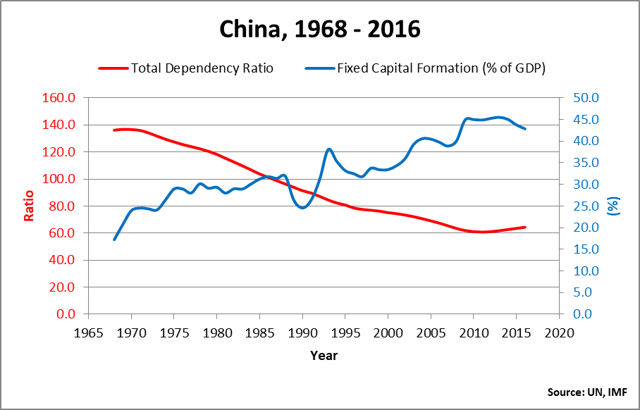 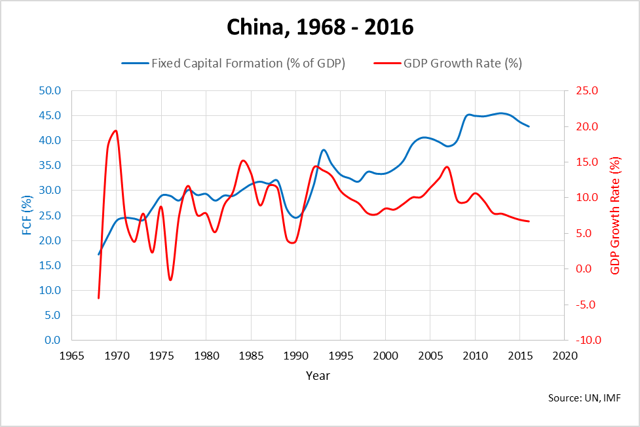 China’s problem is clear. Its total dependency ratio has increased since 2012 and it will gradually increase. China's current fixed capital formation percentage of GDP is not sustainable. The cost of medical and pension expenses for the retirees would increase rapidly. The wages will rise and the margin will diminish. Fixed capital market would be depressed. China has to sacrifice its fixed capital investments and economic growth. China’s debt would increase rapidly to cover its dependent-related expenses and to sustain its economic growth. There is no free lunch.

The below chart represents the forecast of China’s fixed capital formation percentage of GDP from 2018 to 2050. Total dependency ratio data has been derived from United Nations forecast. Based on the inverse relationship between the fixed capital formation percentage of GDP line and the total dependency ratio line, the forecast was created. 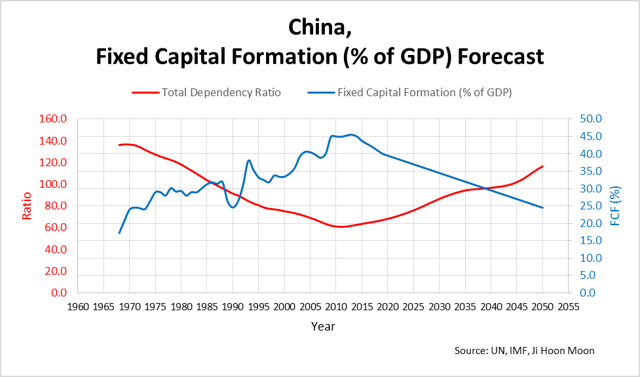 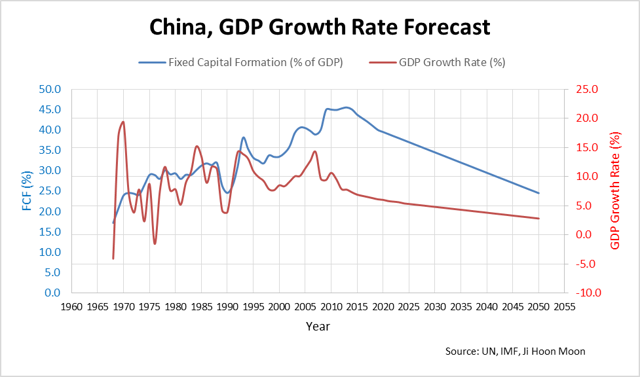 (Please note that the forecasts are mainly based on the relationship among demographic and economic data explained in this article. Other factors or events would affect China’s GDP growth rates.) 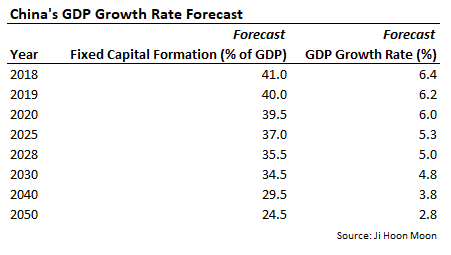 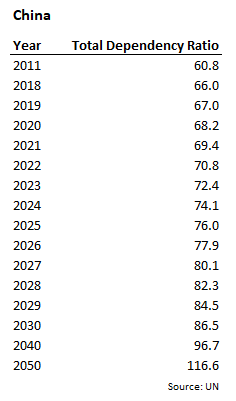 Other Negative Global Environments to China:

Given the demographic problem of China, other negative global environments would affect China’s economy. Trump’s administration’s view toward China would have changed from “partner” to “competitor.” America has pushed China on North Korea issue. America would impose tariffs on China imports. Next American president election will be held in 2019. If Trump wins, he will be president until 2024 and China would struggle with Trump administration until 2024.

The Federal Reserve, the unofficial world’s central bank, has gradually increased its interest rate since 2015. The European Central Bank will follow the trend soon. Rising interest rate trend would bring another Tequila Effect or a crisis in emerging markets in 5 to 10 years. It is inevitable that China’s debt will gradually and rapidly increase over the next century to sustain its economic growth and afford dependent-related expense. Rising interest rate environment would give another pressure to China’s economic growth.

China is surrounded by three strong competitors: the U.S., Japan, and India. China is engaged in territorial disputes with its neighboring countries: Japan, India, Vietnam, Philippines, Brunei, Indonesia, Malaysia, South Korea, and Taiwan. China’s defense budget has gradually increased in order to protect its interests. China’s rising defense budget would give another pressure to its economic growth.

Because of China’s demographic shift, China’s GDP growth rate and fixed capital formation percentage of GDP will gradually decrease until 2050. The medical and pension expenses will increase, wages will rise, margin will diminish, and fixed capital market would be depressed. I would avoid investing in China’s real estate sector in a long-term horizon. Please reconsider your position on China-related index funds, mutual funds, ETFs, or securities, if you believe you were too optimistic on China’s future economic growth.

If you have invested in these securities, please reconsider your position:

I hope to continuously contribute and share my idea through SA. I hope you enjoy my article and please feel free to “like” and “follow.” Thank you for reading.

Watchman
283 Followers
My mission is to provide an insight about a market, company, and opportunity. MBA in Finance.
Follow