Global economic growth slowed sharply to the weakest in over a year in March, according to the latest PMI surveys. Although some of the slowdown may prove temporary, the broad-based nature of the weakening suggests growth has peaked. Price pressures meanwhile remained elevated, in part due to supply constraints giving pricing power to sellers. 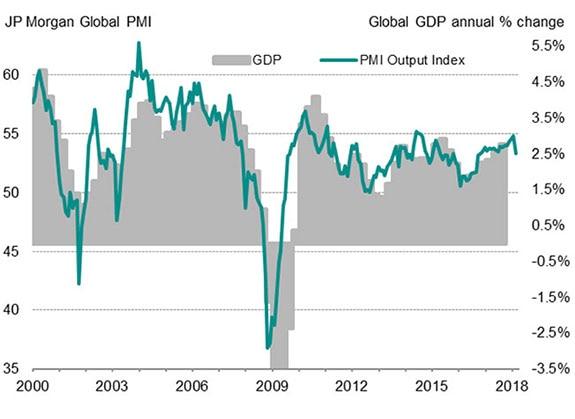 The headline JPMorgan Global Composite PMI Output Index, compiled by IHS Markit, fell for the first time in six months in March, down sharply from 54.8 in February to a 16-month low of 53.3. The 1.5 index point drop was the steepest seen for two years.

To put the decline in context, while the February PMI reading was consistent with global GDP rising at an annual rate of 3.0% (at market exchange rates), the March reading is indicative of 2.5% growth.

Marked slowdowns were seen in both manufacturing and services, though the latter saw the steeper slide. 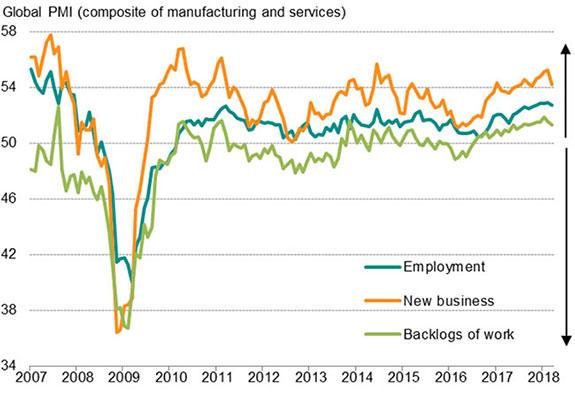 Growth of new business likewise slowed, albeit down only to a five-month low, with backlogs of work also rising to a weaker extent to register the smallest accumulation of uncompleted work for six months.

Employment growth remained more resilient, easing only marginally from the decade-high rates seen in prior months to suggest that firms continued to focus on expanding capacity to meet rising demand.

Encouragingly, future expectations remained elevated by historical standards, down from peaks seen in the first two months of the year but above the average seen in 2017 and well above the 2016 average. 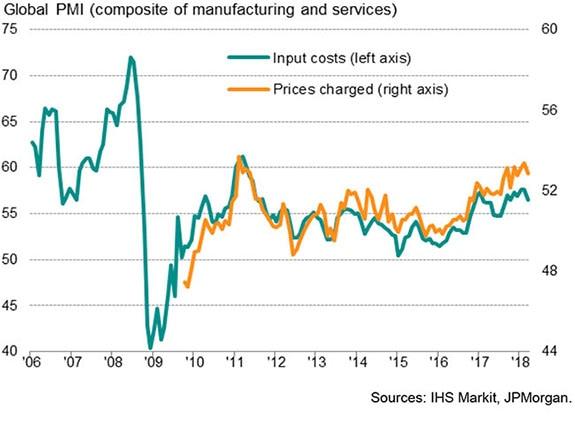 The sustained solid employment growth and elevated level of business optimism suggest that firms are generally not expecting the March slowdown to be the start of a further marked weakening in economic growth and demand. In some countries, notably the eurozone, UK and in some US states, bad weather was reported to have adversely affected business conditions, suggesting some of the weakness could prove temporary. In other cases, notably manufacturing, supply chain constraints limited firms' ability to expand capacity at rates seen in prior months. Incidences were also reported of skill shortages limiting growth. 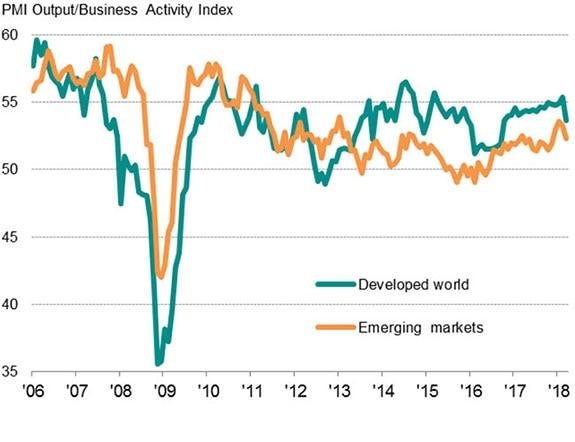 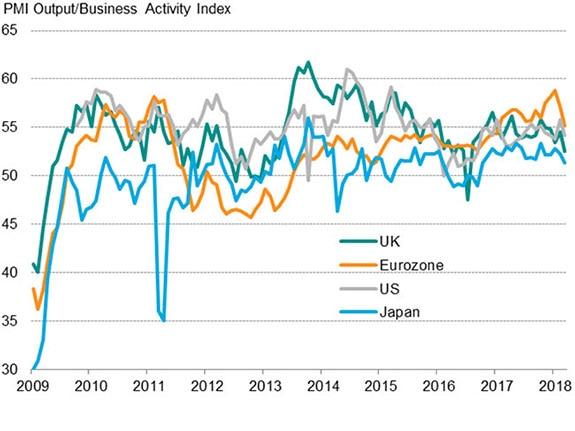 Global input costs meanwhile rose sharply again on average, albeit with the rate of increase easing to a five-month low. The weaker rate of cost inflation took some pressure off selling prices, which showed the smallest increase for three months. However, the overall rate of selling price inflation remained one of the highest seen over the past seven years. 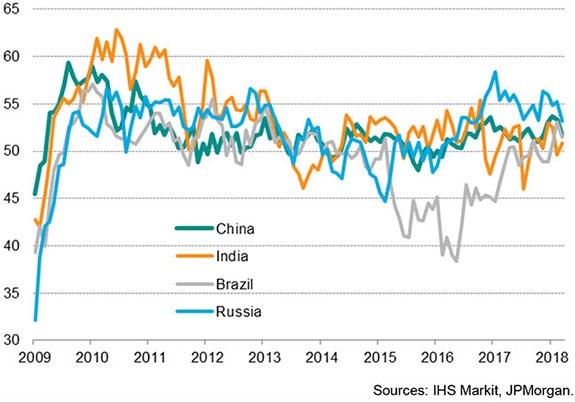 Growth slowed sharply in the developed world, down to a one-and-a-half year low. Weaker rates of expansion were seen in all four of the largest developed economies. While the eurozone continued to lead the upturn, the gap has narrowed markedly with the US, albeit with both recording solid rates of expansions commensurate with first-quarter GDP rising by approximately 0.6% and 0.5% respectively. A substantially slower rate of growth was signalled in the UK, pointing to a first-quarter GDP rise of 0.3%. Japan's upturn also lost momentum, with the Nikkei composite PMI down to a 17-month low.

Emerging market growth meanwhile cooled further from January's peak, though continued to run at one of the highest rates seen over the past five years. Russia, China and Brazil all reported slower rates of expansion, though India bucked the trend, albeit still registering the weakest growth of the four largest emerging market economies.

Markit
2.29K Followers
IHS Markit (Nasdaq: INFO) is a world leader in critical information, analytics and solutions for the major industries and markets that drive economies worldwide. The company delivers next-generation information, analytics and solutions to customers in business, finance and government, improving their operational efficiency and providing deep insights that lead to well-informed, confident decisions. IHS Markit has more than 50,000 key business and government customers, including 80 percent of the Fortune Global 500 and the world’s leading financial institutions. Headquartered in London, IHS Markit is committed to sustainable, profitable growth.
Follow
To ensure this doesn’t happen in the future, please enable Javascript and cookies in your browser.
Is this happening to you frequently? Please report it on our feedback forum.
If you have an ad-blocker enabled you may be blocked from proceeding. Please disable your ad-blocker and refresh.