After hitting multi-decade highs in February, optimism on the part of small businesses pulled back a fair amount in March. While economists were expecting the headline index to see a slight pullback to 107.0 from last month's reading of 107.6, the actual decline was much larger as the index dropped to 104.7. With a m/m decline of 2.9 points, this month's drop was the largest drop since 2015. In terms of the report's reading relative to expectations, however, we actually saw a bigger miss back in January with the release of the December 2017 report.

Even with this month's decline, however, we would note that sentiment on the part of small businesses remains positive and is well above the historical average reading of 96.6. Also, as noted in the report, of the 432 historical monthly readings, only 20 have been higher than this month's level. 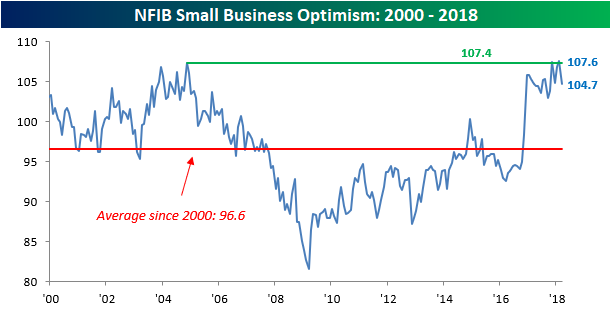 In terms of the biggest problems facing small businesses, the table below summarizes this month's breakdown. Topping the list once again this month is Quality of Labor, which received 21% of the votes. That's a high reading, but it's actually down from February's reading of 22%. Falling further and further down the "problems list" is Govt. Red Tape and Taxes. While markets have grown increasingly concerned about price pressures in the last couple of months, small business owners aren't seeing it yet as only 1% cited inflation as their number one problem, and that's down from 2% last month. 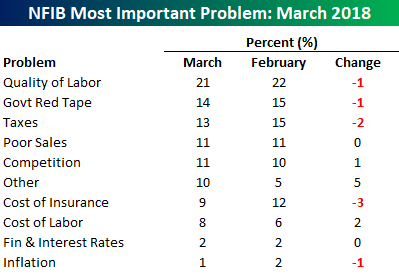 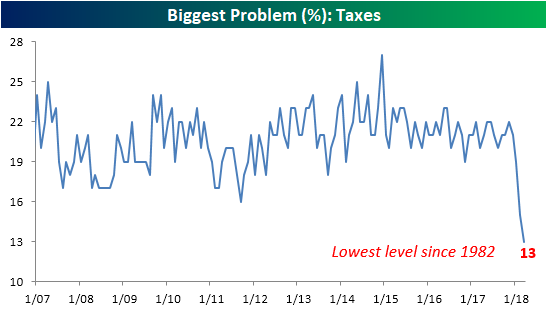 Inflation may not be a big concern at this point for small businesses, but with issues arising regarding labor quality and costs, that could very well lead to higher wages and ultimately higher prices. As shown in the chart below, 29% of small businesses cited either quality (21%) or costs (8%) as their number one problem this month. That's the highest level in at least a decade. 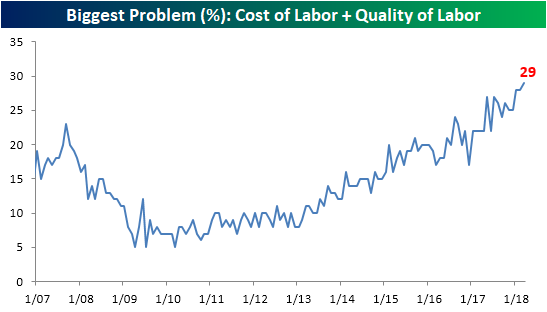 Bespoke Investment Group
46.17K Followers
Bespoke Investment Group provides some of the most original content and intuitive thinking on the Street. Founded by Paul Hickey and Justin Walters, formerly of Birinyi Associates and creators of the acclaimed TickerSense blog, Bespoke offers multiple products that allow anyone, from institutions to the most modest investor, to gain the data and knowledge necessary to make intelligent and profitable investment decisions. Along with running their Think B.I.G. finance blog, Bespoke provides timely investment ideas through its Bespoke Premium (http://bespokepremium.com/) subscription service and also manages money (http://bespokepremium.com/mm) for high net worth individuals. Visit: Bespoke Investment Group (http://bespokeinvest.com/)