Probably the greatest example of what becomes of a nation this gets rich, yet fails to have a productive industry, is Spain in the 1500's.

President Trump campaigned on re-industrializing America and bringing high quality manufacturing jobs back to the US.

So far, it appears that campaign promise is bearing fruit, and that's good news for America.

In Peter Bernstein's book, "The Power Of Gold", he wrote a chapter titled "The Fatal Poison and Private Money"

A monumental mass of gold and silver sailed across the Atlantic from the New World to Spain during the 1500's. According to one authority, the total European stock of gold and silver at the end of the century was nearly five times its size in 1492.

The Spanish Empire was born and it became immensely rich. However, that newfound, or should I say, plundered, wealth simply went from the ships of Spain's ports on to foreign lands soon after.

Spain failed to invest in their own domestic productive economy and instead simply relied on buying goods from their trading partners in exchange for their gold and silver. Spain also borrowed heavily from German moneylenders.

At the same time, the monarchy was every ambitious with expanding their empire and spent massively on military and warfare. Again, monies to pay soldiers stationed in distant lands ended up in the coffers in those distant lands.

Spain would go bankrupt routinely, beginning in 1557, then again in 1560, 1576 and 1596. Financial crisis would continues in the decades ahead as well.

In essence, Spain in the 1500's tells us what not to do: Neglect your own industrial base and finance endless wars overseas.

Here is a chart showing the total number of employees in the US in the goods producing industries:

The number of employees and the percent of goods producing employees in the economy only tells us so much.

To get a better gauge on US Industry, it helps to check the Industrial Production Index:

However, don't be misled to think that we are again knocking on all time highs in our industrial production.

Taking the same index and adjusting it for population, it looks like this: 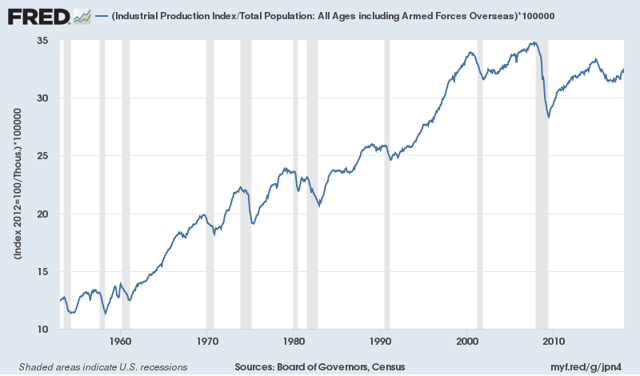 When Trump took office, this index from the chart above was at 31.56, the same level as around July 1998.

I'd like to note that I'm not aware of an index of our "Industrial Consumption."

It would be nice to gauge the gap between our consumption of industry Vs. our production of it.

Much of the gains in this index chart above involve not so much additional units of say cars or houses, but rather, improvements in our cars and houses.

Our cars are safer and more gas efficient.

Our home living spaces are bigger.

Our phones are faster and smarter.

Our computers are faster and more efficient.

I believe that what is at stake is the divide between our consumption of industry Vs. our production of it.

This is apparent in our negative trade balance: 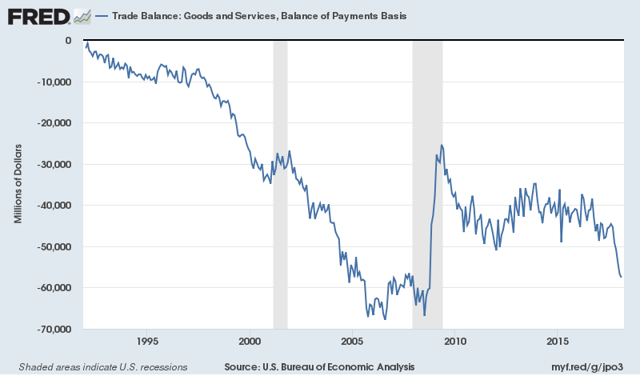 This is money that is going into the coffers of our trading partners just like what was happening is Spain in the 1500's.

Of course this leads to foreigners using these dollars to buy US assets. The impact of that is foreigners now own nearly $8 trillion more in US assets than American's own of theirs: 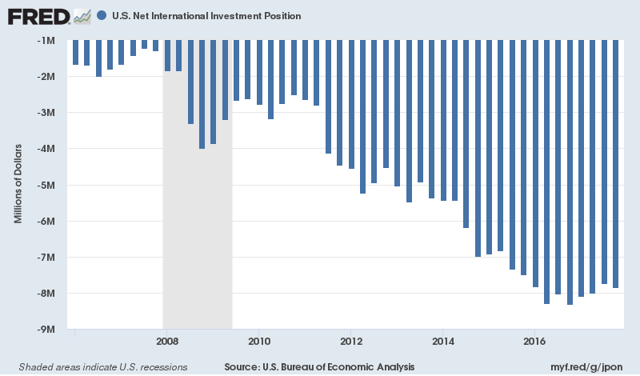 It is vital I believe for America to re-industrialize lest we become like Spain.

We have a long ways to go if we are to ever fix the divide between our consumption of industry Vs. our production of it. However, fixing that divide should help improve our trade balance and delay at least the potential of our own bankruptcy.

Simply looking at total employees of goods producing industries and accounting for the average weekly hours worked, we can gauge our year over year gains in this sector of our economy. 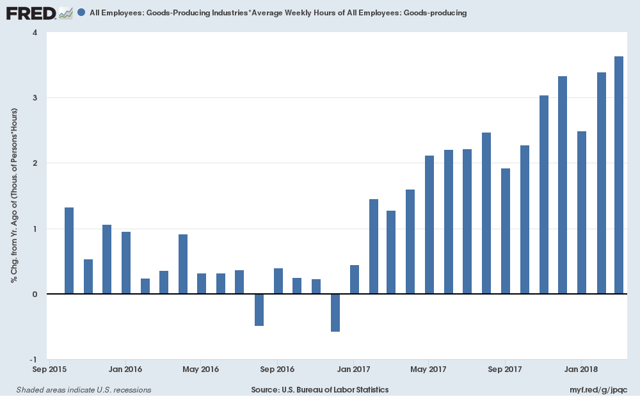 The gains have been good. Growth is the highest year over year level yet under Trump at 3.65% in March.

Industrial production is also coming back to life also with the highest levels of year over year growth yet under Trump:

It's also worth noting, jobs in the goods producing industry have an average weekly pay rate of $1,132 as of March 2018. These are good middle class jobs.

With the recent events revolving the trade disputes, it's going to be very interesting to see how these job numbers look over the next 12 months. In theory, they should rise as that would be the point of the trade war.

The success of re-industrializing the U.S. is paramount to having a strong dollar, a strong credit rating and maintaining and hopefully improving living standards in the U.S.

Follow Jason Tillberg and get email alerts
+
Add a comment
Disagree with this article? Submit your own.
To report a factual error in this article, click here.
Your feedback matters to us!