Carbon Black (NASDAQ:CBLK) intends to raise $100 million in a U.S. IPO, according to an S-1 registration statement. The final IPO amount may be significantly different since this is a typical placeholder figure.

The firm provides what it calls a Predictive Security Cloud that uses analytics to improve endpoint security for organizations.

CBLK is growing rapidly but faces the twin challenges of cost containment and showing a path to profitability.

I'll provide a final opinion when we learn management's pricing and valuation assumptions.

Management is headed by CEO Patrick Morley, who has been with the firm since 2007 and was previously COO at Corel Corporation and CEO of Imprivata.

The firm has developed a robust partner program consisting of:

Carbon Black has created a platform that enables organizations wanting to improve the security of their internal networks.

The endpoints of a network's elements are the primary source of the number of cyber-attacks, and Carbon Black's system focuses on securing a heterogenous and constantly changing endpoint attack surface by analyzing large amounts of data to optimize IT security.

Below is a brief overview video of the firm:

In addition, the firm employs inside sales and field sales representatives that effectively extend the firm's efforts through its channel partners.

Management says that in Q4 2017, 94% of its 'new and add-on business was closed in collaboration with a channel partner.'

Customer retention rates have hovered around 92% to 93% over the past three calendar years.

CBLK's cost of revenue for its primary subscription segment has more than doubled between 2015 and 2017:

However, sales and marketing costs as a percentage of total revenue have dropped in the past three years, indicating increased efficiency as a function of revenue generation:

Management cites its 2015 cohort contribution margin as evidence that the firm is increasing the margin contributed over time by the customers it added in 2015, as the graphic below shows: 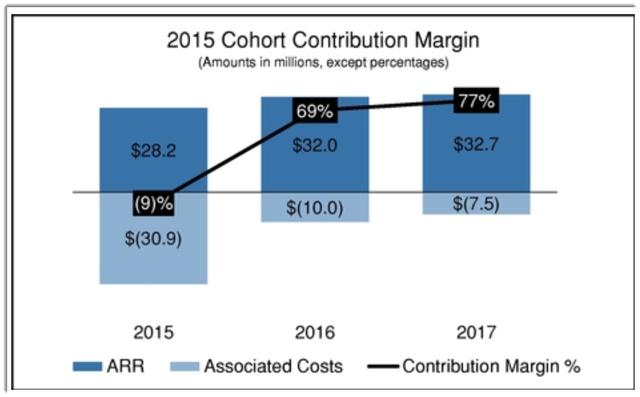 The cohort contribution margin is the annual recurring revenue [ARR] of a customer cohort minus the associated costs with obtaining that cohort of customers.

While the metric is more of an operational rather than financial metric, it indicates that the 2015 cohort has generated $92.9 million in lifetime-to-date revenue while costing $48.4 million over its lifetime. The payback period for this cohort looks to be somewhere between 12-15 months.

According to a market research report by MarketsandMarkets, the global endpoint security market is expected to reach $17.38 billion by 2020.

This represents a projected CAGR of 8.4% from the baseline year of 2015 through 2020, which is a moderate level of growth.

The major drivers of this growth are the need to reduce IT security risks in a growing Bring Your Own Device [BYOD] environment and increased frequency of endpoint attacks through malware, trojans, and advanced persistent threats.

The banking, financial services and insurance sector is projected to account for the strongest increase in demand, with healthcare, telecom and IT sectors also contributing significant market demand for improved solutions.

North America will be the largest market in nominal terms but the Asia Pacific region will also present growth opportunities during the period.

CBLK's recent financial results can be summarized as follows:

Below are the company's operational results for the past three years (Audited GAAP): 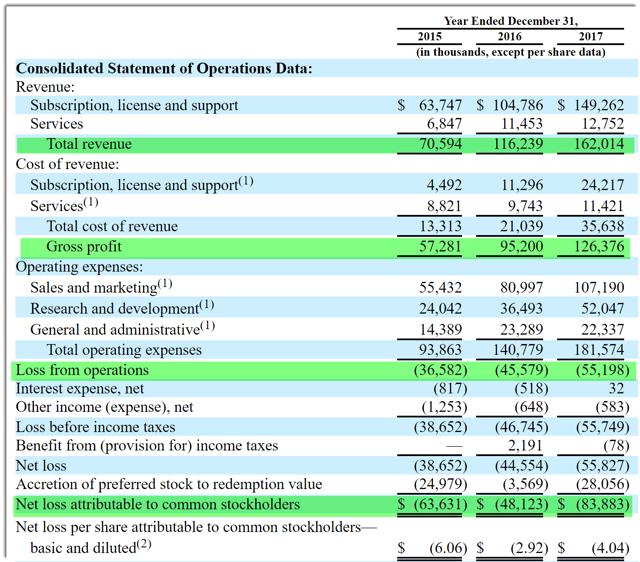 As of December 31, 2017, the company had $36 million in cash and $29.7 million in total liabilities excluding deferred revenue.

CBLK intends to raise $100 million in gross proceeds from an IPO of its common stock.

The principal reasons for this offering are to create a public market for shares of our common stock, obtain additional capital and to facilitate our future access to public equity markets. We cannot specify with certainty all of the particular uses for the remaining net proceeds from the offering. We have not quantified or allocated any specific portion of the net proceeds or range of the net proceeds to any particular purpose. We anticipate that we will use a majority of the net proceeds we receive from this offering, including any net proceeds we receive from the exercise of the underwriters' over-allotment option to acquire additional shares of common stock, to invest further in our sales and marketing activities to grow our customer base, to fund our research and development efforts to enhance our technology platform and product functionality, and to pay anticipated general and administrative expenses.

Management's presentation of the company roadshow is not yet available.