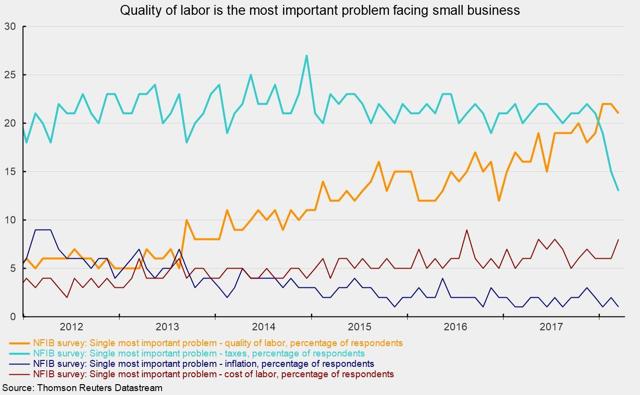 The small business optimism index from the National Federation of Independent Business fell slightly in March, coming in at 104.7 versus 107.6 in February. However, the March result extends a run of 16 consecutive months above 100 - a very high level by historical comparison. While most of the individual indicators that make up the overall optimism index ticked down in the latest month, nearly all remain at very high levels. A significant concern among small businesses is the declining quality of the available labor force (see chart), particularly in the context of an already tight labor market and robust plans for increased hiring in the near future.

The general outlook remained positive as the percentage of respondents believing now was a good time to expand came in at 28, down from a cycle high of 32 in January and February but well above the single-digit percentages seen for most of 2016. The net percentage of respondents expecting better economic conditions ("better" minus "worse") came in at 32, down from 43 in February but quite high compared to negative numbers from 2016. A net 20 percent expect higher sales over the coming months, while a net 8 percent reported higher sales for the most recent three months versus the prior three months.

The percentage of firms planning to increase employment rose to 20 percent from 18 percent in February. The 20 percent result is one of the highest on record. Thirty-five percent of firms report having openings they are not able to fill at the moment. At the same time, the percentage of firms reporting few or no qualified applicants for job openings was 47 percent in March, unchanged from February and 7 percentage points below the record high 54 percent in December 2017. That combination in the labor market of healthy demand and weak supply has 19 percent of firms saying they intend to increase worker pay over the coming months.

The labor market dynamics have made quality of labor the most important issue for small businesses. Among the 10 issues listed in the survey, quality of labor ranks first at 21 percent, government regulation and red tape came in second at 14 percent, and taxes were third on the list at 13 percent (see chart). At the bottom of the list was inflation, with just 1 percent saying it was an issue. Inflation has been at the bottom of the list for several years, reflecting the slow pace of price increase over the current cycle. Financing and interest rates were the second lowest, while cost of labor was the third lowest at 8 percent. Cost of labor, however, has been drifting up in recent years, reflecting the tightening labor market (see chart).

The report is consistent with other economic data that suggest a positive outlook for the economy in the months and quarters ahead. However, tightness in the labor market, while a win for workers, is putting pressure on labor costs and profits for small businesses.