Goldman Sachs (NYSE:GS) for the last six months has been underperforming when compared to its industry peers. However, the firm's earnings have been very impressive as it has managed to surpass analysts' estimates for three out of last four quarters. On the negative frontier, the firm has been battling several issues off late that range from external factors such as the sluggish level of worldwide economic growth to internal matters such as lower client activity. But overall, due to the firm having a well-diversified business portfolio and a strategy that focuses on capitalizing growth prospects, I believe the firm will continue to strengthen in the days to come. Moreover, the firm has uplifted investor confidence through laudable cost control measures and various capital deployment activities that they have undertaken.

In this article, we shall be undertaking a detailed analysis of the equity's technicals that shall solely focus on the weekly and monthly charts as we are anticipating the share price for the future weeks. Moreover, we shall take a keen look at the firm's last quarterly earnings plus the fundamental reasons why investors should purchase the equity and the risks the equity currently faces. 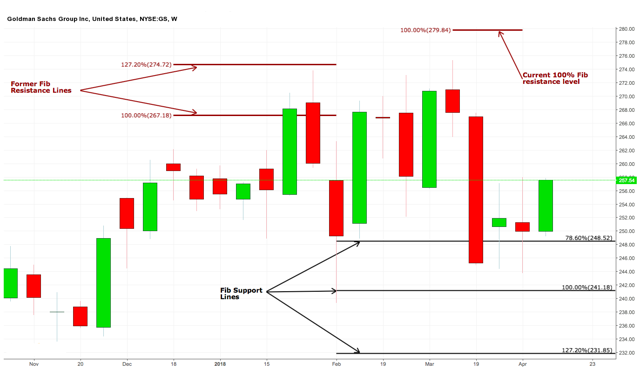 On the technical analysis front, I shall focus on the weekly and monthly charts as I am anticipating a rise in the equity price for the near weeks to come. When the equity's charts are analyzed, we can clearly see that the equity shall be rising by 23 points to 44 points in the next few weeks.

On the Japanese candlestick frontier, the equity has just formed a bullish engulfing pattern on the weekly chart. The bullish engulfing pattern fully sticks to the rules of candle charting as it has formed after a downtrend plus the green bullish body is neatly wrapped around the prior red candles real body. The prior small red body shows us that the bears are losing their steam and that the bulls have now got the upper hand. On the monthly chart, we see that there is a tweezer bottom pattern as both the candles have matching lows and the second candle clearly shows that the bear's drive is easing.

On the moving average frontier, for the weekly chart, the bullish engulfing pattern has just started an attempt to cross over the 20-day MA and this shall certainly occur. Moreover, the candle has encompassed several exponential moving averages, thus signifying a strong bullish drive. For the monthly chart, all the moving averages are rising in a railway track formation, thus showing that an uphill run is on the cards.

Thus, I expect the equity to rise in the coming weeks by 23 to 44 points. As this is a projection for the future weeks, there will be naturally some down days on other time frames such as the daily chart, but in the longer time frame, I am certain it shall have a rise to these levels.

The firm's fourth-quarter earnings were remarkable as there was a rise in the earnings level of 15.9%. The adjusted earnings per share stood at $5.68 which outdid analysts' estimates which had pegged it at $4.90. Additionally, the firm's bottom line improved by 11.8% year-on-year.

On the negative side, we see that the firm is currently under pressure due to the weak performance seen in their fixed income business line, but this was luckily cancelled out by the continuous rise seen in their investment banking business revenues which in turn buttressed the bottom-line statistics. Moreover, there has been a constant rise in revenues from the firm's underwriting business line.

On the capital position frontier, the firm is on solid ground, as in the fourth quarter results, the organization's supplementary leverage ratio on a fully phased-in basis is 5.8% which is lower than the previous quarter's ratio of 6.4%. Moreover, the ratio was impacted by 30 bps due to the tax legislation.

For the whole of 2017, the adjusted net income per share stood at $19.76 which is higher than the previous year's earnings as they stood at $16.29 per share. Moreover, the earnings outdid the analyst estimate of $18.98.

The firm's capital deployment status changed during 2017 as Goldman Sachs repurchased 29 million shares at an average share price of $231.87 which incurred to them a total cost of $6.72 billion. Specifically, in the fourth-quarter of 2017, the firm procured 6.6 million shares at an average price of $241.13 per share which had a total cost of $1.59 billion. All the share repurchases were made from their common stock portion.

Fundamental risks to the firm:

Goldman Sachs is an institution with a bright future due to its diverse business nature, and I am positive that the firm's share price shall rise to the above-mentioned levels in the near weeks to come. I say this as the firm's technicals and fundamentals support this notion. Moreover, I am certain it shall break through the 100% Fibonacci resistance line and reach the 161.8% level 44 points away. Thus, if you plan to trade this equity, then you ought to ensure that you utilize a trailing stop so that your capital is as safe as it can get.

Sandeep Singh Ahluwalia
860 Followers
I am a finance and investment professional whose prime focus is on the British, Indian and American financial markets. I specialise in technical analysis with my key area being Candlestick pattern analysis and Fibonacci analysis.  Academically, I posses two masters degrees one is a Masters of Science in Finance degree from the University of Portsmouth, United Kingdom and the other is a Masters of Commerce degree specialising in Accounting. My Bachelors degree is in Economics, Finance and Banking from the University of Portsmouth, United Kingdom.