Dividend Growth Investing (DGI) combines two desirable notions for investors: Retiring on dividend income without touching the principal, and increasing retirement income over time to combat inflation. Supporters of DGI tout the peace of mind from not selling down principal, and note companies which issue or increase dividends historically outperform companies which do not.

After working most of their adult lives, people are accustomed to living off income, getting cost-of-living increases, and not selling their belongings to buy food. DGI offers the promise of continuing this funding model into retirement. This is something which is comfortable for many, since it mimics the funding model they have grown accustomed to throughout most of their lives.

On the other hand, selling principal to fund retirement sounds scary to many people, particularly those without access to professional financial advice or the ability to create statistical models. Everybody intuitively knows if you need to sell your furniture to eat, eventually you will have no furniture and go hungry. But selling stocks is not like selling your furniture, because furniture doesn't grow larger over time (at least not in my experience). Still, the question of how much principal is safe to sell is more difficult to answer than "none of it."

Fair enough. And if the discussion ended here, it would be fine. DGI could take its place in a diversified multi-strategy portfolio, and that would be that. After all, there is no heated debate on the relative merit of stocks vs. bonds.

However, DGI seems to attract rather lively debates, with zealots on both sides of the issue, and DGI is sometimes framed as investing panacea. From my perspective, while there may be plenty of anecdotal data which appears to support DGI, there is little hard data from deployment as a retirement strategy, and certain risks exacerbated by DGI are rarely highlighted.

This article highlights some of those risks:

Risks are illustrated using historical S&P 500 dividend returns and also the S&P Dividend Aristocrats Index (NOBL), an index of companies which have increased dividends annually for at least 25 years. This will be used to show some of the hidden risks with DGI as strategy. There are many ways to implement a DGI strategy, but using the dividend achievers index as a representative strategy is both objective and comes with historical data, whereas personalized strategies generally do not. Also, since the vast majority of individual investors do not beat stock indexing, it seems reasonable to assume the vast majority of individual DGI investors will not beat the aristocrats index.

Inflation risk vs. living off dividends

Having chosen to live off dividends in retirement, what should one expect?

The fundamental nature of this risk is, while dividends may increase, they may increase more slowly than inflation, forcing a lower standard of living on a retiree. Below is a chart of real (inflation-adjusted) S&P 500 (SPY) dividends over the past 100+ years (1901 = $100). This shows that although dividends generally increase over time, they do not always keep pace with inflation, and this situation can continue for extended periods of time (20+ years). 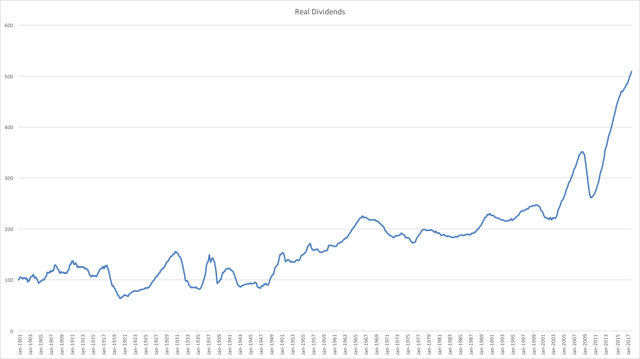 Since DGI indexes such as the dividend aristocrats exclude stocks which decrease their dividends, it is tempting to imagine a DGI investor would not be subject to these ups and downs. However, this would ignore two pertinent facts:

1. Real Dividends are a function of inflation as well as dividend growth. High inflation can reduce real dividends even while nominal dividends increase.

2. Dividend aristocrats are not immune from dividend cuts, which happen semi-regularly, particularly during recessions. These stocks are simply dropped from the aristocrats index and new ones are added over time. There is no guarantee new stocks pay more dividends than old stocks. Dividends fluctuate.

Remember: Past performance is not indicative of future results.

The chart above doesn't express the risk to retirees very well. To put a finer point on the issue, 1200+ retirement scenarios were studied for both 30- and 40-year retirement periods. The chart below shows the probability of a retiree enduring at least N years of reduced income from the income they retired on. 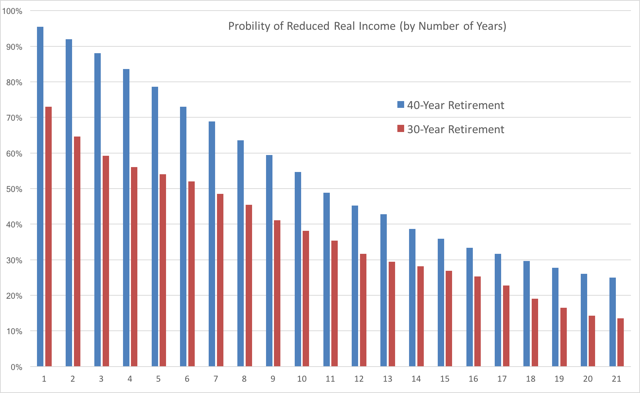 For example, for a 40-year retirement, there is a 95% chance a retiree will have to endure at least 1 year of living at a lower standard of living than they initially retired at. That doesn't sound so bad. I could easily cut back for a year during a recession. The problem is the two little words "at least."

This is starkly at odds with the peace of mind which supposedly comes from not touching the principal. One could reasonably question how many retirees would actually deprive themselves for 20 years while staring at a large pile of principal, human nature being what it is. This, in turn, calls into question the wisdom of attempting to live off dividends as a retirement strategy.

Dividend risk due to recomposition

As you can see (assuming a $10,000 investment), even though the new stock has a dividend which is 50% higher than the old one, dividend income drops by 25%.

It would be tempting to just hold onto the old stock, even though it is being removed from the index for cutting its dividend, but that would not be DGI. It is, however, human nature, which again raises the specter of how actual investors will behave when faced with these decisions.

There is no way around it, DGI investors will need to sell stocks, either to add new DGI stocks or to remove DGI stocks which no longer meet the criteria for DGI. In addition to the dividend risk shown above, there is also an active-strategy risk due to capital gains tax. After paying tax, an investor will not be able to purchase as many shares of the new stock. A reduced number of shares means two things: Reduced dividend income, *and* reduced principal.

Another form of active-strategy risk is the temptation to make unnecessary adjustments to the portfolio. Study after study has indicated trading too often is one of the primary reasons individual investors underperform the market.

During bear markets, it's critical not to lose nerve and sell low, which can be difficult to do after losing 40% of your portfolio. It is human nature to feel loss more acutely than gain. Many an individual investor has sold stock because they cannot stomach any more losses, only to watch the market bounce back.

As part of DGI investing, stocks which reduce their dividend no longer qualify for the strategy, and are sold. Seems perfectly reasonable.

When do stocks reduce their dividend?

That's right, during recessions when prices are low. In fact, 2-3 times as many stocks were dropped from the aristocrats index during recessions as during other times. So DGI effectively enforces sell-low behavior on investors.

You could be forgiven for thinking this wouldn't matter, since a DGI investor will sell dividend-cutters low, and buy other DGI stocks which are also low.

Like most aspects of investing, it's not quite that simple.

During the last recession, the S&P 500 dropped 52%, while the dividend aristocrats dropped only 46%. What's wrong with that?

During this period more than a quarter of the stocks in the dividend aristocrats index were dropped due to dividend cuts. On average, the price of stocks which did not reduce dividends dropped 37%, while the price of the dividend-cutters had dropped 67% by the time they announced the cuts. This forces DGI investors to sell at a 67% loss and buy back in at 37% down.

When the market rebounds by 59%, principal corresponding to the stocks which dropped 37% will be back at par, but the principal corresponding to dividend-cutters which were sold at 67% down, having also grown by 59%, will still be down 48%. Basically, the DGI investor lost roughly half of the principle on those stocks by being forced to sell rather than ride out the storm.

The business of identifying quality dividend-growth stocks is not for the feeble-minded. As we have shown earlier, the DGI investor should expect to replace about 3.3 stocks in their portfolio every year. Early into retirement this shouldn't really pose much of a problem, but as age-related cognitive decline sets in, the probability of making poor stock-picking decisions increases.

It is important to look past DGI investing optimism and realize that it carries risks which are quite often ignored or glossed over. Diversification is paramount, not only with respect to stocks and asset classes, but also with respect to strategy. There is nothing wrong with DGI as a strategy in a multi-strategy portfolio, just don't put all of your eggs in the DGI basket. Nothing is ever quite as it appears.