As I look at the report that we published in Seeking Alpha on March 12, 2018, "Gold/Silver Ratio Signals Massive Rally," I could not help but go back and look at the indicators that anticipated this latest $1.00 oz. silver rally. In the report, I touched on the gold/silver ratio reaching above of 80.50 sometime in 2008, when silver was trading at about $9.73/ounce as we were entering the Great Recession of 2008. The price of silver after breaking down in the gold/silver ratio below the 80 level, exploded to the high in April 2011 of $49.82/ounce. That was approximately a 500% gain in the price of silver. During this period of time, fortunes were made and fortunes were lost. The gold/silver ratio reached the high of about 88.86 in 2008, before it collapsed in the same time frame that silver exploded to $49.82, with the ratio reaching a low of 30.48 by April 2011. This all occurred within three years. 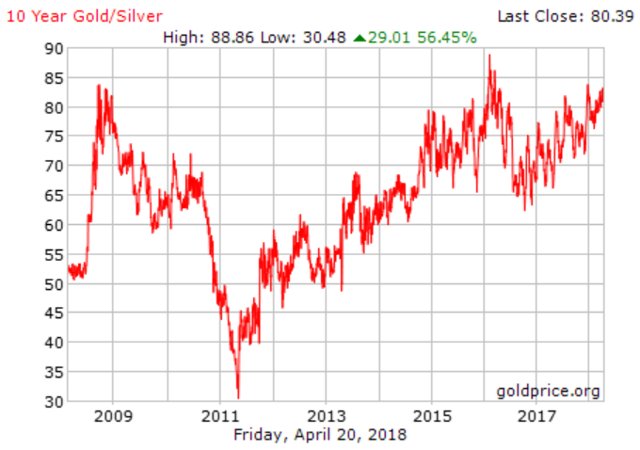 Fundamentals: Oil on the Rise

As I look at the signals relating to the current economic climate, it's beginning to indicate a similar pattern that is reminiscent of the Great Recession of 2008. Aggressive US action against Syria and the increasing tensions with China over trade mark a shift to a more aggressive approach over long-standing issues, such as control of Middle Eastern oil, trade and control of areas in the Middle East where Russia wants to build an oil pipeline to transport crude from the Middle East to Russia. Such actions have an effect on the price of crude oil and commodities in general.

As we begin to see the global political and economic environment get more volatile, we are beginning to see such tensions reflected in the price of crude oil, which is trading near $70/barrel again. Regardless of the rhetoric of the US administration, the price of crude oil reacts to the policies and actions of the administration, including recent actions in Syria and the continuing war in Afghanistan. In part, the United States is focused on these countries because they have decided that they don't want to use the US dollar as the world's reserve currency. In my opinion, we have been aggressive toward Iran, Russia and China because of the shift in their policies against using the US dollar as a reserve currency and to settle trade.

China is now trading oil futures on the Shanghai exchange; oil futures contracts that can be redeemed for gold. This marks a massive shift in the gold market and decline in the role of the US dollar. It also marks a more transparent price discovery for gold compared to Western paper markets because China is careful to make sure that any short seller in the paper market is not naked. In the West, central banks have been selling massive quantities of shorts in gold and silver that exceed by 10 to 1 the actual production of gold and silver. Such naked selling has been implemented with the idea of supporting of the US dollar as the world's reserve currency.

When you consider the fundamentals since 2008, they have not changed. In relation to debt, we have increased our debt level to a record level, particularly during the Obama Administration, which increased US government debt more than all previous presidents combined. The current level of debt is unsustainable, and it is only increasing by the day. But the powers at be, as long as the system does not break, as long as there are no defaults in sovereign bonds, as long as no central banks collapse, believe that the system is able to sustain this kind of monetization of the debt. Therefore, it appears that the policies are not going to change and that we will continue to increase the debt levels into uncharted waters. We don't really know yet what the consequences will be of such unbridled borrowing.

The gold/silver ratio is a major indicator of things to come. The price of silver has come to an extremely oversold level. Although it has industrial, medical and technological uses, I focus on it as a monetary unit. It has always been a monetary unit and will continue to be. It is the poor man's gold. The profit potential of silver from where we are now, is offering the possibility to get in early on what could be a truly historic move. With the recent move in silver, we are beginning to see this analysis validated. Silver now offers a tremendous opportunity to build wealth over the short term. 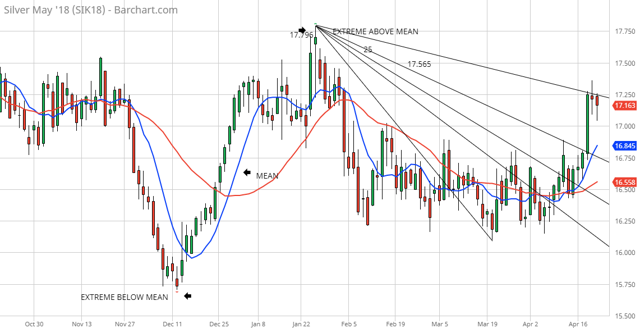 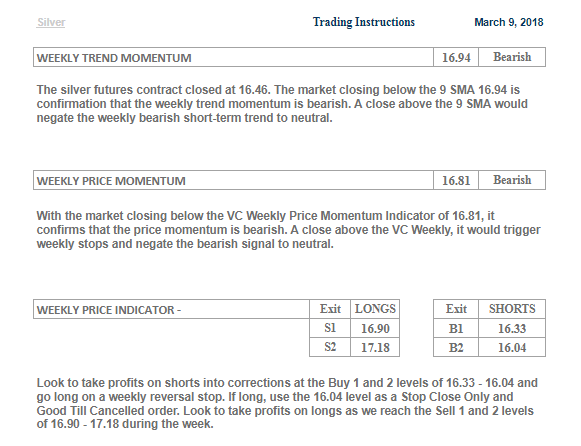 The silver market closed at $16.46. The price of silver came down from its March 12 high to a low of $16.10. If we look at the low of $16.10, made on the 20th, it came right into the B1 and B2 levels of $16.33 to $16.04, which activated a buy when the market came up to close above $16.33 on March 21. The market rallied to make a high of $16.81, touching the average on March 27 and then reverted back down to the low made on April 5 of $16.15. It came down twice into these B1 and B2 levels, which the VC PMI indicated means there is a high probability that the price will revert from there back to the mean. On April 5, the price reverted almost nonstop to a high on April 19 of $17.36, rallying from the B2 level we indicated in the report, going through the $16.81 average price, changing to bullish sentiment from bearish and accomplishing the targets of $16.90 to $17.18. The VC PMI is probably one of the best programs to trade the implied volatility with a very defined structure, a very defined price and a very defined methodology for you to execute these entry and exit levels successfully. 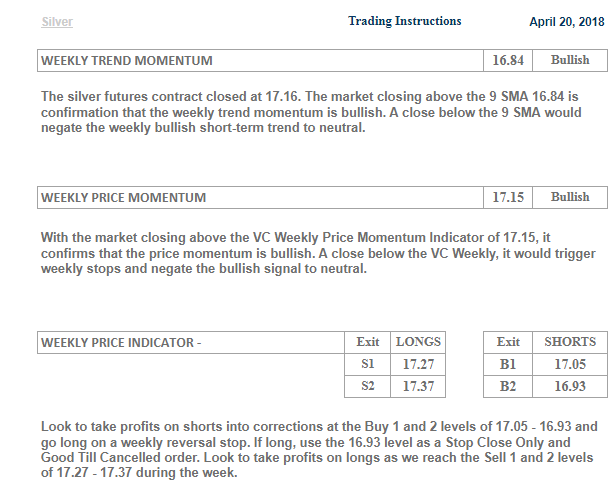 Last week, the silver futures contract closed at $17.16. Using the first VC PMI filter, the 9-day moving average of $16.84, it confirms that the trend momentum is bullish, since the market closed above the moving average. But the VC PMI also tells us that if the price comes down and closes below $16.84, it would negate the bullish sentiment to neutral. This level is the first level of protection where self-directed traders can place a protective stop.

The second filter the VC PMI uses is the variable changing price momentum indicator, which defines the mean, pivot point or equilibrium point of the market. The VC PMI's average price for next week is $17.15. With the market closing above $17.15, it indicates a bullish price momentum indicator. If the price closes below $17.15 this week, it would negate this bullish price momentum indicator to neutral. A second close below $17.15 would activate the lower levels of demand (B1 and B2) at $17.05 and $16.93, which provide a 90% to 95% chance that the market will revert back to $17.15 once we test the B1 and B2 levels, or if we test these levels and close above them.

As we look at the weekly price indicator, due to silver closing at $17.16 above the mean or average price, it activates the sell 1 (S1) level of $17.27 and the sell 2 (S2) level of $17.37. The VCPMI is telling you to take profits at $17.27 to $17.37. If the price reaches $17.27, there is a 90% chance the market will revert back to $17.15. If the market trades at $17.37, there is a 95% of a reversion back to the mean. If you go short at these levels, use the higher price of $17.37 (S2) as a stop to get out of your short positions. The idea is that, with the price closing above the resistance level, it becomes support for the next fractal in price, and it would negate the bearishness of supply that we see. A close above the S2 level indicates that the demand coming into this resistance area far exceeds the supply offered, so the price will adjust to a different, higher, fractal.

I greatly appreciate any comments or suggestions about what you would like to see the VC PMI identify or analyze. Any feedback would be tremendously helpful to help me show you how to use the VC PMI to assist you in your trading.

Disclaimer: The information in the Market Commentaries was obtained from sources believed to be reliable, but we do not guarantee its accuracy. Neither the information nor any opinion expressed herein constitutes a solicitation of the purchase or sale of any futures or options contracts. It is for educational purposes only.