With the yield curve hitting its flattest level of the expansion last week, many are wondering what impact that will have on the stock market. 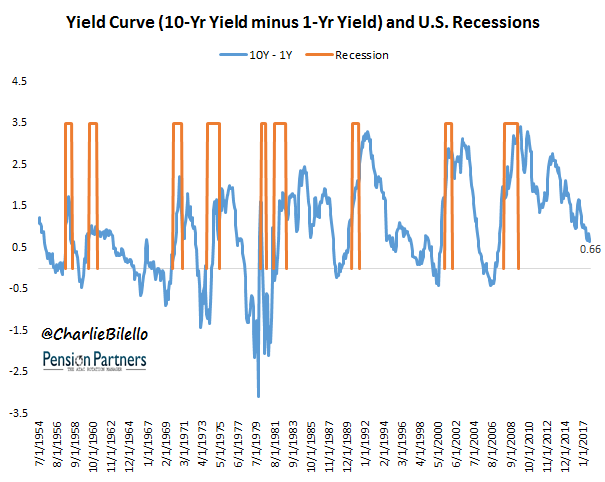 Looking back at history, that does seem to be the case. The yield curve has inverted before 6 out of the last 9 recessionary stock market peaks, with an average lead time of 8 months. 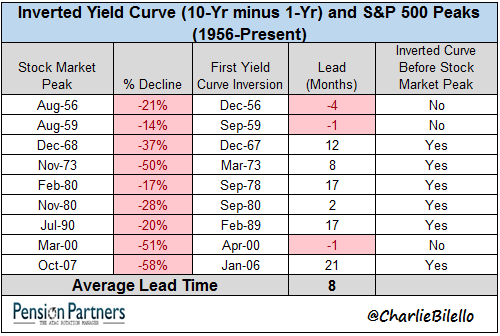 Another issue is that the stock market is not the economy. Stocks can go down without a recession or a yield curve inversion, as we saw most recently in 2011.

Thus far, we've focused only on an inversion of the curve as it relates to stock market peaks.

What does the yield curve level itself tell us, if anything, about general stock market performance?

The chart below illustrates S&P 500 returns at various yield curve levels. There does not appear to be a linear relationship here between the yield curve and the concurrent return for stocks. 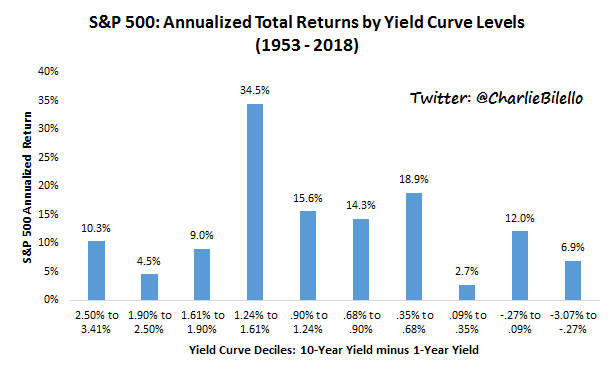 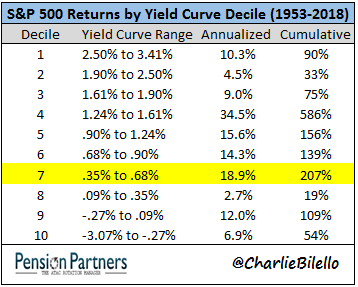 But since the yield curve is a longer leading indicator than stocks, what we really want to focus on is future returns.

Does the stock market perform worse after flatter or inverted levels for the yield curve?

There does seem to be some evidence of that, with the weakest forward stock market returns occurring in deciles 9 and 10 (yield curve range of -3.07% to 0.09%).

The odds of a positive return are lower as well.

We're still ways off from entering the bottom two deciles today, but this is something to keep in mind. As the yield curve flattens towards inversion, the odds suggest a more difficult period for stocks awaits. It is important to remember, though, that this is by no means a prerequisite; stocks can decline sharply irrespective of the curve.

Charlie Bilello
1.73K Followers
Investor. Author. Reader. Thinker.
Follow
20 Comments
To ensure this doesn’t happen in the future, please enable Javascript and cookies in your browser.
Is this happening to you frequently? Please report it on our feedback forum.
If you have an ad-blocker enabled you may be blocked from proceeding. Please disable your ad-blocker and refresh.