Stock market crashes, like those that hit the U.S. markets in 1929, 1987, and 2008, tend to follow the same formula. This makes people wonder why they keep happening and we cannot prevent or even predict them. In fact, the act of thinking that we can prevent or predict them can at least partially be credited with causing them.

The formula is essentially as follows:

Many people who speculate about what the next crash will be cite part two or part three of this list. They try to predict that the market will crash because of a bubble in one area of the economy or because of a potential event, like an election or a war. Generally these are not enough to cause a crash, particularly a lengthy one. All three components have to happen.

An example of part one of the formula, the false sense of security, is mortgage-backed securities leading up to the 2008 Financial Crisis. An individual mortgage can be a risky investment because the borrower could default on their debt. A basket of mortgages from one region like a regional bank might hold can be risky because of the volatility of local real estate markets. Mortgage-backed securities were huge baskets of loans from all over the United States. They paid a lucrative interest rate like a risky mortgage investment would, but they were considered safe because the real estate market had never crashed nationwide at once. This high-yielding, "safe" investment attracted major institutional investors, including the largest banks in America. It also created a market for lenders to issue subprime mortgages and then sell them to investors, passing on the risk to someone else. The illusion of safety made these investments riskier and made the consequences of their failure more dramatic. The entire U.S. economy was drastically affected. The stock market crashed, unemployment neared 10%, etc. It took years for the market to recover.

Investors and economists have learned a lot from crashes like that one, and since 2008 we have had an unusually long period of time without a market crash (if you don't count the 2010 Flash Crash, which rapidly recovered). There have been dramatic events like natural disasters, the Greek debt crisis, Brexit, the Arab Spring, etc. There have been bubbles. Cryptocurrencies behaved like a textbook market bubble, but this bubble peaked and fizzled out around the end of 2017, and the overall market shrugged. The commonality between all these events was that there was no illusion of safety. People assume that natural disasters and political instability will happen. People knew that cryptocurrencies were primarily speculative. These instabilities did not cause market crashes because investors were mentally prepared for them. There was no panic.

Illusions of safety are the source of the problem. So where can we find those right now? What might be at the root of the next crash?

The biggest vulnerability in the market right now is debt. Much of the world economy, especially in the United States, has been addicted to debt for a long time, and a long period of low interest rates has exacerbated the problem. The illusion of safety regarding debt is in credit ratings, whether they are the FICO scores of individual consumers or the credit ratings of bonds.

U.S. household debt is at or near all-time highs by nearly every measurement. Many families have debt levels that are unsustainable. As I pointed out in an article for Seeking Alpha 11 months ago, some of the standards for FICO scores have been lowered (i.e. late or missed payments don't hurt as badly as they used to), and bankruptcies from the 2008 recession are falling off credit histories. The average American has an unhealthy amount of debt but a good credit score. Here is how that debt breaks down.

According to Harvard's Joint Center for Housing Studies, approximately 39 million Americans can't afford their homes. 19 million are spending more than 50% of their income on housing! The New York Fed reports total mortgage debt nationwide to be at $8.8 trillion for the end of Q4 2017, up $139 billion from the previous quarter.

Student loan debt continues to grow and is at $1.38 trillion. 11% of student loan accounts are 90+ days delinquent. Even subprime auto loans have a lower delinquency rate than that at 9.7%.

Auto loans make up a growing percentage of household debt. Families are buying more expensive vehicles and taking longer to pay them off, so that the average duration of auto loans for new vehicles is over 67 months. With an average interest rate of 5.11% and average loan size of $29,154, Americans are paying $38,000 for a $29,000 vehicle and expecting to make monthly payments of over $500 for the next 6 years. Again, that is the average borrower of a new car. The average subprime borrower is paying a 16.27% APR for a $16,557 used car.

Credit card balances and credit limits are both on the rise as consumers' credit scores improve and they continue to spend more of their future earnings on credit cards.

The big picture for American consumer debt, according to the New York Fed, looks like this: 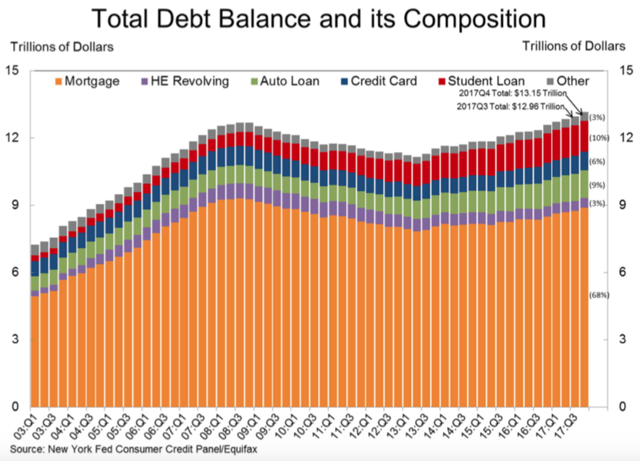 Americans are as indebted as they were during the 2008 recession with student loan and auto loan debt higher than they have ever been.

The good news is that credit inquiries declined in the second half of 2017. The bad news is that households remain in vulnerable situations regarding their debt. If some significant event were to rapidly impact the ability of American families to make their monthly payments and to keep spending money, that could trigger a stock market crash and a recession.

Individual consumers are not alone in this problem. Governments and corporations are just as leveraged, and their credit ratings can be just as overrated. Worldwide debt is estimated to be at about $164 trillion, while world GDP is estimated to be around $80 trillion. The human race as a whole has borrowed twice what it can produce in one year.

The U.S. government has had major fiscal policy issues for as long as anyone can remember. The national debt knows no status other than "all-time high." If you start to forget, check in at USDebtClock.org occasionally to remind yourself of the insanity. It is currently over $21 trillion. When you look at current and proposed policies, it shows no sign of slowing down. Despite this, U.S. government treasuries are considered among the safest investments in the world.

AAA credit ratings do not mean what they used to be. In 2007, AAA-rated mortgage-backed securities insured by AAA-rated AIG FP failed, triggering the Great Recession. More recently, Toys 'R' Us issued commercial mortgage backed securities (CMBS) in 5 tranches, with 48% of it rated AAA and 75% of it rated investment grade. Toys 'R' Us went bankrupt 11 months later, leaving the CMBS with 123 empty buildings. 26 buildings are considered completely worthless, while the other 97 will likely experience long vacancies in a struggling retail industry. It is too early to tell how this will affect the CMBS investors, but it does not look good.

The infamous auto loans described earlier in this article are largely securitized in the form of auto asset-backed securities (auto ABS). More than 20% of securitized auto loans are subprime. "Credit enhancement" schemes have allowed lenders like Exeter Finance to get AAA ratings for subprime auto ABSs. "One method of enhancement is to put excess loans in a deal," Joseph Cioffi of Davis & Gilbert LLP told Bloomberg, "but if you have 100 bad loans, and put in 50 more bad loans, you’re not any better off."

Since 2001, Standard & Poor's has issued 1,751 ratings upgrades for auto ABS loans and only 39 downgrades. This is despite growth in the percentage of subprime loans included in the securities and the increased attention that has been given to how risky they are becoming. In fact, S&P has not downgraded an auto ABS since 2011.

The municipal bond sector is as risky as any. Many governments are trying to keep up with rising health care costs while dealing with overextended pension plans. Many states and municipalities have lost revenue to outsourcing and other issues, and many have sacrificed revenue by offering tax breaks to companies willing to move in. Like much of the rest of the world, they are borrowing to get by until revenues hopefully improve.

What To Do About It

It would take years for the average household, corporation, or government to pay off its debts, and that is at current income levels if nothing goes wrong. Murphy's Law ("anything that can go wrong will go wrong") just loves situations like this. There are always plenty of ways for things to go wrong. The real measure of risk is how well one is prepared for the day that Murphy shows up. Every financial decision should at least consider the worst case scenario, especially in a world where most people do not seem to be thinking that way.

When it comes to investing, there is no corner of the market that is completely safe from a consumer debt crash. However, some places may be less directly affected than others.

I am reallocating those funds into shorter-term bonds, into dividend-paying stocks that are not too heavily leveraged, and into international dividend-paying stocks, either through direct ownership or through funds. In the event of a crash, I believe these allocations would be less exposed to the more vulnerable debtors and therefore more likely to provide safety of principal, growth of capital, and steady income.

These are not drastic changes. I am sticking to my commitment of a mostly buy-and-hold philosophy. I am not panicking and bailing on a significant portion of the market, but I am easing out of small allocations that I believe to be the most vulnerable to a debt crisis.

One could consider holding short positions against securities that would be most affected by the debt crisis. However, I would recommend caution, as it is not clear how long it will take for the economy to realize the implications of its debt problems. It could be two or three months, but it could just as easily be be two or three years.

The economy is too complex for us to be able to accurately predict market crashes. Unpredictability is what allows them to happen. One cannot possibly put a date on it, but one can identify vulnerabilities in the economy where people expect a high rate of return from behaviors that they do not believe to be risky. The current state of consumer debt and bond debt shows signs of people believing that risky behavior is safe. One day Murphy is going to show up and prove to them once again that this was foolish.