To make money shorting, look for an edge, be patient, and don't be deterred by long investors and management.

To avoid getting your face ripped off, avoid valuation shorts, accelerating growth, and companies with insanely loyal customers.

Also avoid stocks owned by irrational investors and/or in industries with big, dumb acquirers, and never use options.

In this, my fourth and final column on short selling (my previous ones are: 12 Reasons Not To Short, 10 Reasons to Short and How to Find Great Shorts), I aim to share many lessons I learned – too often the hard way! – about how to successfully short stocks, without getting your face ripped off.

If you’re interested in learning more about this topic, please come to the first-of-its-kind conference I’m hosting that is dedicated entirely to short selling next Thursday, May 3 in NYC on The Art, Pain and Opportunity of Short Selling. It will feature 22 of the world’s top practitioners, including David Einhorn and Carson Block, who will share their wisdom, lessons learned, and best, actionable short ideas (a list of all speakers, further information and registration is available at kaselearning.com; Seeking Alpha readers can get 10% off by using discount code SA10).

Look For An Edge

Whether investing long or short, the key to investment success is having an edge, typically important information, analysis or insight that isn’t widely known by other market participants. For example, in the case of Lumber Liquidators (LL), my most successful short ever, someone who used to work in the flooring industry in China called me and told me that the company was buying toxic, formaldehyde-drenched laminate flooring and selling it to its American customers. Once I confirmed this story by having the product tested myself, I helped expose what the company was doing and the stock collapsed by more than 90%.

In contrast, on too many occasions than I care to remember, I shorted a stock based on hearing a compelling thesis but doing little work myself, which often led to severe losses. The lesson here is simple: if you don’t have an edge, don’t invest!

Okay, let’s say you’ve done your homework and correctly identified a company whose earnings are sure to collapse. Short it immediately, right? Not so fast… It’s also critical to have some sense of when earnings might start to decline because being early can lead to years of painful losses. For example, I and a handful of other short sellers, including most notably Bill Ackman, identified that MBIA (MBI) was a house of cards in late 2002, but earnings – and the stock – didn’t collapse for another six years. This chart shows how operating earnings continued to grow for many years until the financial bubble burst (financial charts are from CapitalIQ and stock charts are from bigcharts.marketwatch.com): 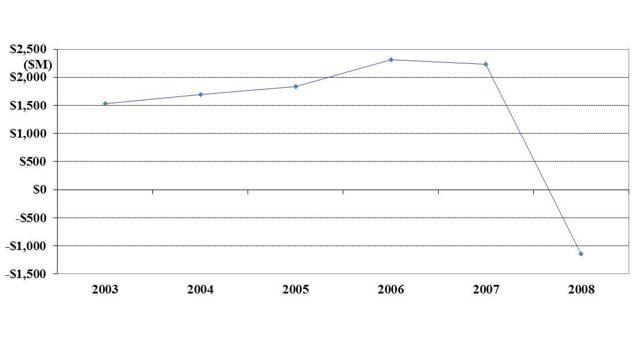 As you can see in this stock chart, the stock price followed earnings almost exactly:

In hindsight, we should have been more patient and waited to short the stock until the writing was on the wall – there was still plenty of time to get in over many months on the way down, which is almost always the case, as very few stocks suddenly get cut in half.

Here’s another example I used in my column last week: Crocs' (CROX) rubber shoes were a huge hit in 2007, driving the stock price through the roof, as you can see in this chart from 2006-2008:

I know a hedge fund manager who correctly saw that this was a fad and shorted the stock at $20, $30 and $40 – and got crushed as it ripped to $75 in a matter of months. Again, patience was called for here, as there was plenty of time to short this on the way down, once it was clear the fad was over.

The lesson here is often a cruel one: being too smart can work against you. The goal of investing is to develop insights before everyone else in the market – but if you do so too far in advance, it can be a long and painful wait for your investment thesis to play out, so you need to be clever and patient on the timing.

Don’t Be Afraid Of Smart Investors Or Management

I have trouble thinking of a successful short in my career in which there wasn’t at least one smart investor who was long the stock. Though I never had a position, think of all the brilliant investors who were long Valeant (VRX) as it declined by 97%. Depending on who the investor is, it’s worth taking the time to fully understand what that investor’s long thesis is, but it shouldn’t deter you from putting on the short position if you’re convinced you’re right.

Similarly, don’t be deterred by management not selling, or even buying their stock. They’re often trying to support the stock price or, most commonly, genuinely believe in the bright future of their company. It’s ironic how often they’re the last to know that the wheels have fallen off the bus!

How To Avoid Getting Your Face Ripped Off

The unfortunate math of short selling is that your upside is limited to 100% (the stock goes to zero), but your downside is unlimited, so it’s really critical to avoid shorting stocks that zoom upward. My key lessons here are:

My experience is that if a company’s revenues and earnings are rising rapidly, the stock will rise as well, irrespective of how highly valued it is – just look at Amazon (AMZN) and Salesforce.com (CRM).

In general, as I discussed in my column last week, you want to short the stocks of companies in decline – but not always. Sometimes it can be profitable to short those that are still growing, but more slowly than the market expects. However, I strongly advise against ever shorting companies showing accelerating growth (meaning the year-over-year percentage growth rate is rising).

A perfect example of this is Netflix (NFLX), which has burned countless short sellers as it's risen 40 times since it bottomed in October 2012 (after falling by more than 80% in the previous year), as this chart shows:

During most of this parabolic rise, the stock has appeared wildly overvalued by any traditional valuation metric, but I’ve told anyone who’d listen (then and now) that this is a bad short because of the company’s accelerating growth, as shown in this chart of Netflix’s year-over-year revenue growth for every quarter in the past decade: 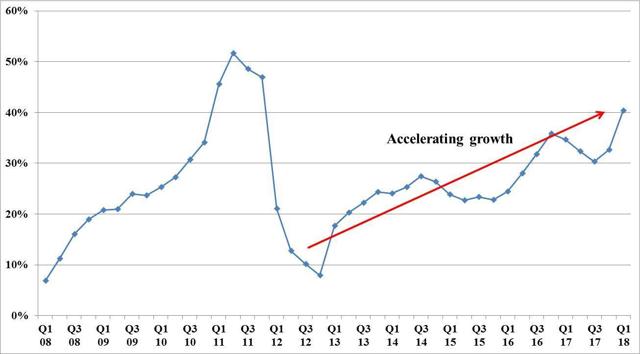 It is very rare for a company of this size to show accelerating growth like this (Alphabet (GOOG) (NASDAQ:GOOGL) is another example).

The most vivid example I can give in recent years is Tesla (TSLA). It has so many things short sellers look for: a highly promotional CEO as well as declining free cash flow and rising debt, as this chart shows: 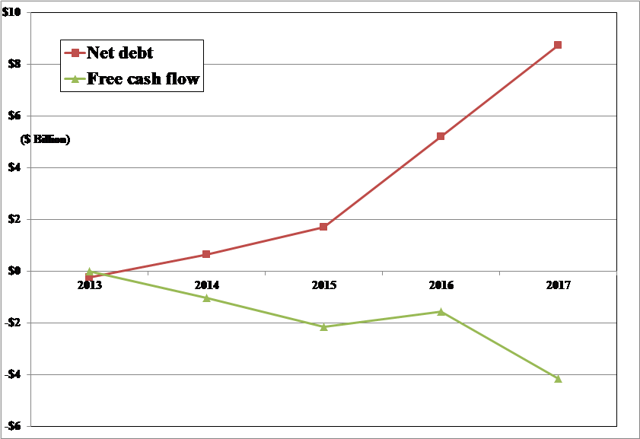 I foolishly shorted this back in 2013 and paid a steep price as it rose 5x against me before I finally realized my mistake and covered.

Everyone I know who owns a Tesla loves it with a burning passion. It was dumb of me to bet against this loyalty.

I suppose there is a value-oriented case that can be made for Tesla’s stock: project a certain market share 5-10 years in the future, which leads to a certain number of cars sold, estimate the sales price and margin of each car to arrive at profits, and then put a multiple on those profits to (presumably) conclude that the stock is trading at a discount today.

But let’s be serious: the vast majority of Tesla shareholders in my opinion own it based on a belief that Elon Musk is a genius (he is!) and that Tesla is going to revolutionize the global auto industry (it is!) and change the world for the better (we’ll see). These investors don’t care that Tesla is losing ever-increasing amounts of money, debt is piling up, and the Model 3 continues to be plagued by production delays and quality issues.

So my question to those short the stock is: what, exactly, do you think is going to cause these investors to give up on the story, which is what’s necessary for the stock to decline?

It is very dangerous shorting story/faith stocks owned by irrational investors. It’s safer to short those valued on a multiple of earnings – and earnings collapse, as I discussed in my column last week.

Be careful of irrational acquirers

It was really irritating (and costly) being short Palm years ago when Hewlett-Packard (NYSE:HPQ) bought them, and when Mallinckrodt (MNK) bought Questcor, which was a total scam, so be extra careful shorting stocks in industries like tech and pharma in which there is substantial M&A activity and a lot of big, dumb, deep-pocketed buyers.

Many investors think they’re mitigating risk by buying put options on a stock rather than shorting it because it reverses the math: gains are theoretically unlimited, while losses are capped at 100%. While this is true, you now have to be right on both the stock and the timing. It’s hard enough to be right on one, much less both, which is why most options expire worthless. Owning something that is likely to go to zero isn’t my idea of mitigating risk.

A wise friend once said to me: “Options are like heroin. They feel soooooo good… but they’ll kill you!”

I hope you find these lessons from a veteran short seller helpful. Come to my conference next week to learn more, and happy hunting!

Follow Whitney Tilson and get email alerts
+
Add a comment
Disagree with this article? Submit your own.
To report a factual error in this article, click here.
Your feedback matters to us!