Friday's GDP report saw stronger growth than was expected, coming in at 2.3% versus expectations for 2.0%, but below the 2.9% rate from the prior quarter. The biggest drag on GDP growth this quarter came from Personal Consumption Expenditures, which slowed to just 0.73%, the slowest rate since Q2 2012. This decline came from the goods purchased category - mainly durable goods, especially automobiles and in the non-durable category - clothing and shoes. This rather dramatic decline is likely a function of two things: first the rising ratio of consumer debt to disposable income and second, the base-effects of the forced spending in Q4 due to the damage caused by the twin hurricanes in the east and fires in the west.

On the other hand, government investment in fixed asset investment (infrastructure) is at historical lows. The chart below, from Topdown Charts, illustrates this quite clearly. 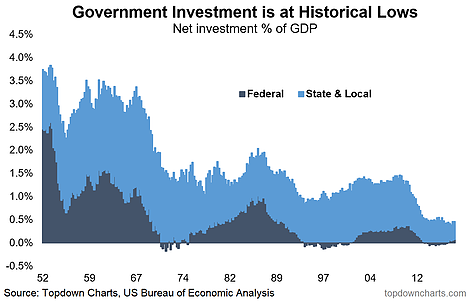 As we discuss regularly here at Tematica, the growth of an economy is a function of just two things:

Crumbling highways, bridges, and roads and outdated airports (just to name a few) reduce productivity and increase costs. For more robust economic growth, these investments - be they through tax and debt-funded public coffers, or the private sector - must be made to keep America competitive.

As Topdown Charts points out, this is an area to which investors ought to pay attention -

Thinking about trends in US government fixed asset investment, and the need for infrastructure upgrades and modernization, and what was an initial false start for an infrastructure spending plan (which now seems likely to be tabled for serious discussion after the US mid-term elections later this year), it's interesting to note the rise in popularity of infrastructure ETFs."

Tematica Research
1.06K Followers
We see Investment themes at work and at play every day in the economy — oftentimes across industries and categories — and other aspects of day to day life. It is the opposite of the typical Wall Street approach to research, which oftentimes overly focuses on a single industry at a time and results in missed opportunities. These themes are identified by looking at the intersection of shifting economics, demographics, psychographics, technologies, mixed in with regulatory mandates and other forces. In other words, looking at the real world that companies are operating in! Some businesses will adapt, while others will leap frog ahead riding these thematic tailwinds to profits and significant share price movements, and sadly there will be those left floundering too. For every Apple, there is a Palm and Blackberry. For every Facebook . . . a MySpace or Friendster. For every Netflix, there’s a Blockbuster. The list goes on and on, even in non-technology categories. By examining these thematic tailwinds, our goal is to identify mispriced securities relative to the business opportunities ahead and avoid those that are overly valued and or staring down the barrel of significant headwinds