The Battle Of Giants
392 Followers

Editor's note: Seeking Alpha is proud to welcome The Battle Of Giants as a new contributor. It's easy to become a Seeking Alpha contributor and earn money for your best investment ideas. Active contributors also get free access to the SA PRO archive. Click here to find out more »

Tesla is struggling to produce enough Model 3s. The problem may stem from its production philosophy. A philosophy that's different from Toyota’s lean manufacturing system, which I believe tops on both quality and quantity.

Tesla faces the same problems, but deals with them very differently.

Let’s compare the two schools of thought (notes below on Toyota Production System are sourced from research articles by Sugimori and Sayer):

It becomes clear that Toyota’s human-centered system is best suited to produce different products that change over time. It makes full use of humans’ ability to improve. To spot problems, identify their root cause, and creatively imagine better solutions.

By contrast, Tesla’s robot-centered system is best suited to produce one product that meets the needs of many. Andrew Sayer explains:

“Where advanced automation, such as flexible manufacturing systems, is introduced, its effects on productivity are greatest where it is applied to a production system that has already been rationally organised; otherwise it is likely to perpetuate the inefficiencies of the old technology and working practices, as has been found with many major new technologies, including computer-integrated manufacturing and office automation.”

Robots are losing the game

Production costs will stay high as long as Tesla continues to develop new models or to improve designs of existing cars. It’s simply expensive to take robots offline for tuning. It also heightens the risk of running out of cash.

Tesla’s “build it first, fix it later” mentality is also causing high servicing costs. Service cost as percent of total cost of revenues grew from 7.2% in 2014 to 12.9% in 2017. For every $1 customers paid to get service, Tesla had to pay $1.23 to get the job done last year. A sign of high rates of in-warranty repairs. Mr. Musk’s cash problems will likely persist as long as he puts quantity over quality. 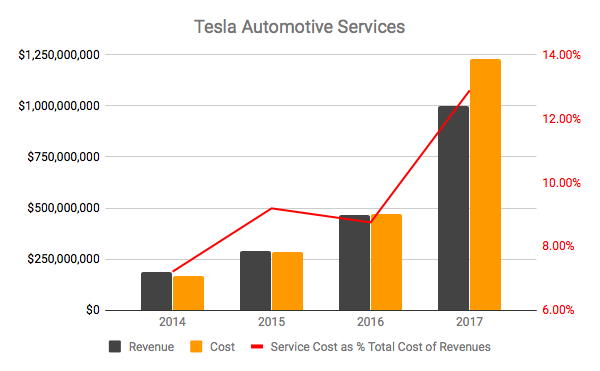 Interestingly, Tesla and Toyota were partners. They worked on an electric version of the Rav4 together. This ended in 2016, supposedly because of a culture clash. It wouldn’t be surprising to find they broke up because of opposing manufacturing philosophies.

The irony is that Mr. Musk instinctively believes in continuous improvement. He shared in an interview how:

More recently, Elon Musk appears to be awakening to the fact too many robots can slow down production. He tweeted in April 2018: “Yes, excessive automation at Tesla was a mistake… Humans are underrated.”

That’s a good start. Tesla however has a long road ahead in convincing its human workers it has their best interest at heart. That it’ll create a safer work environment. That it won’t again try to replace them with robots. Necessary for workers to trust their employer, and in turn, lead continuous improvement initiatives.

Tesla looks up to the Ford Model T for inspiration

Unlike other car manufacturers, Tesla tends to both design and manufacture its parts in-house. When battery problems surfaced with a supplier, Mr. Musk cut the supplier and directed his engineers onto the issue, bringing manufacturing in-house. The same happened when problems arose with the Model X’s second row seat supplier.

This means Tesla only has one supplier for many of its parts: itself. It greatly increases the risk of production delays should any of these parts face manufacturing or design problems. Most manufacturers hedge that risk by using multiple suppliers for the same part. Some even use suppliers in different geographic regions to hedge political and natural disaster risks.

The tendency to build parts in-house may stem from Mr. Musk’s success in reducing cost of rockets at SpaceX through vertically integrated manufacturing. Over 80% of parts used in Falcon rockets are made in-house.

There is however a fundamental difference in rocket production and car production: Delays experienced in launching a rocket are expected and unlikely to affect revenue, whereas delays in car production directly leads to revenue loss. Threatening liquidity.

Tesla’s production is reminiscent of Ford’s 100 year-old just-in-case system used to produce Model Ts. Model T production also focused on lowering cost by using more machines and by making parts in-house at the Highland Park plant. The result was the first car every American could afford. Ford’s Model T only cost $370 in 1921 ($5,060 in 2017 dollars). Less than half the cost of the cheapest GM vehicle: A Chevrolet costing $795 ($10,900 in 2017 dollars).

Low cost was partially achieved by producing only one car model at Ford: The Model T. Ford believed that the Model T was all the car a person would, or could, ever need. He was wrong. The Model T fell out of fashion as GM both reduced cost of its vehicles and introduced different models suiting the needs of different customers. Production of Model Ts ended after 18 years in 1927.

Tesla is already producing three vehicle models by contrast. Each with dozens of options. Its robots therefore need to be much smarter and flexible than Ford’s, having to adapt to different specs. So unless Tesla’s robots are super easy to tweak, they’re bound to continue experiencing a lot of downtime.

Both Tesla’s Semi and Model 3 also face a greater challenge than the Model T. They’re competing with existing car manufacturers with far more experience mass producing vehicles. The Model T didn’t even have a competitor capable of mass production in the early days. They competed against horses. Heightened competition could effectively lower demand for Tesla vehicles.

Investors should be scared Tesla compared itself to Ford and the Model T.

Peter Hochholdinger, Tesla’s VP of Production, may not be of much help. The Volkswagen Group was already a manufacturing powerhouse producing over 3 million cars in 1994, when he joined them at Audi. Mr. Hochholdinger’s current challenge thus lies in boosting production without the support of an experienced manufacturing organization. Something he depended on from the very start of his career. During his time at Audi, production increased from 617,000 in 1998 to 1.9 million cars in 2016. An average growth of 6.6% per year. Tesla’s total production would grow from 103,184 in 2017 to around 172,000 in 2025 at such a rate, missing all production targets.

No light at the end of the tunnel

It's our opinion that Tesla will continue to face production challenges and high costs for the rest of 2018, considering:

None of this takes away the fact the Model 3 is disrupting personal transportation.

The Battle Of Giants
392 Followers
The Battle of Giants uses proprietary data to expose growth strategies of Retail and Technology companies. Who's winning the battle for hyper-convience? Most efficient at last-mile fulfillment? Who's investing most to capture consumers' eyeballs, and retain their attention? Subscribers to our website access the analyses first.
Follow

Additional disclosure: This article is intended to stimulate awareness and discussion on the impact Tesla's production processes have on revenue and costs. Investors should view my work in this light, and seek other competent technical advice on the subject issues before making investment decisions.

162 Comments
To ensure this doesn’t happen in the future, please enable Javascript and cookies in your browser.
Is this happening to you frequently? Please report it on our feedback forum.
If you have an ad-blocker enabled you may be blocked from proceeding. Please disable your ad-blocker and refresh.