In our last commentary on the Japanese yen, we wrote that the currency was looking excessively weak against the euro. In particular, we stated that bullish catalysts driving EUR/JPY were at risk as speculator positioning in both long euro and short yen trades were looking extreme. In addition, we flagged changes to the Bank of Japan’s “yield curve control” program as a potential risk for yen strength. While the BoJ has (predictably) resisted ending its quantitative easing efforts, we contended that even small changes to future guidance would push up the yen. While EUR/JPY traded around 136 when we published our last piece, the pair is trading closer to 130 today.

Looking at recent history, the yen strengthened during the first quarter of this year when risk-taking behavior became excessive. At the time, the US dollar sold off sharply as riskier assets such as commodities, the euro and equities all surged in response. In more recent history, the yen has entered a bearish trend. Between a diminished outlook for Eurozone growth and an ongoing slowdown in emerging markets, speculators are less keen to aggressively chase riskier investments. Given the yen’s safe haven qualities (the currency weakens during booms and strengthens during downturns), this raises an obvious question: why is the yen weakening despite falling risk sentiment?

Yen bears will argue that the currency is trading as an inflation proxy, pointing to rising inflation expectations as the culprit for recent and ongoing weakness. Bulls will argue that recent yen weakness is more a function of the big move up in the US dollar, and is temporary in nature. While our trending indicators continue to suggest a bearish outlook for the yen, we ultimately side with the bulls. Later this quarter, we expect an ongoing deterioration in risk sentiment to push up the yen. Specifically, the yen is likely to strengthen thanks to an (1) ongoing slowdown in global growth, (2) a peak in US growth, and (3) a significant deterioration in the outlook for emerging markets.

Global composite PMIs (an aggregate measure of global business sentiment) peaked in February 2018, and have since been on a declining trend. Looking at actual growth, year-over-year GDP growth in the Eurozone (which is highly sensitive to global growth given its manufacturing and export-centric economy) also peaked in recent history, and is currently on a decelerating trend. This is illustrated below:

Expectations and growth: past its prime 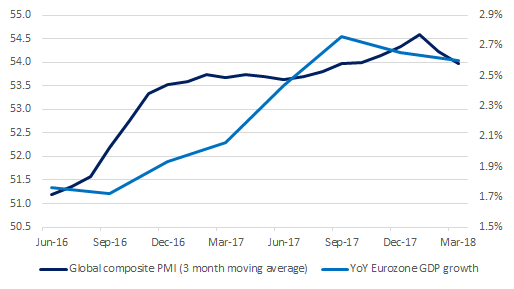 As can be seen above, both expectations and actual growth are now on a decelerating trend. Unsurprisingly, most major global equity markets also peaked in recent history, and have since given up significant gains. As stock markets are forward looking, equity prices are falling as traders discount slower growth in the future. While the yen is typically inversely correlated to changes in equity prices, risk-taking appetite earlier this year was so extreme that the US dollar sold off significantly, pushing up the yen in relative terms. As a result, the yen strengthened despite a big move up in equity prices.

While the US continues to outshine its major peers, even US growth is likely to have peaked in the first quarter of 2018. Following seven quarters of continuous acceleration in year-over-year growth, one of the longest continuous expansions in US history, the suggestion that US growth is likely to decelerate is not contentious. This is particularly the case thanks to base effects (year-over-year growth becomes harder when comparable figures from history are rising) and thanks to the global slowdown described above. As major economic regions such as the Eurozone, Japan, and China markets all weaken, the United States is unlikely to avoid the collateral damage. An overview of recent US growth data is shown below:

It’s just math: US growth to slow as base effects kick in 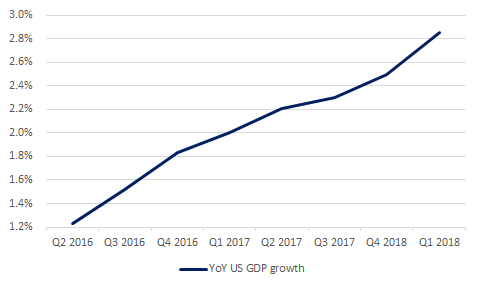 As can be seen above, base effects are becoming a headwind for US growth. In Q2 2017, the US registered year-over-year growth of 2.2%. With the impact from recent tax cuts in the rear view mirror, it will be very difficult for growth in Q2 2018 to keep accelerating from Q1 figures.

While high US growth is keeping US equity markets supported for now (one big reason why US equity markets have outperformed global peers in 2018), we reason that equity prices are more likely to fall in the future. This is because forward looking equity prices will ultimately have to contend with slowing growth. In response, the Japanese yen should find buyers as traders cash in on the currency’s safe haven properties.

Beyond a general global slowdown, and a coming slowdown in the US, yen bulls have even more reasons to celebrate thanks to more serious issues in emerging markets. As we described in a recent analysis of how the US dollar functions as a liability currency, emerging markets are heavily reliant on cross-border lending. As capital markets in developing countries are small and unsophisticated, large borrowers (such as corporations and governments) have few options but to look overseas. Beyond tapping into US dollar loans, emerging markets are also significant borrowers in Japanese yen credit markets. Yen-based investors are particularly keen on emerging markets investments, as there are few opportunities to earn high yields from domestic opportunities in Japan.

This explains why the yen weakens when global growth is strong and strengthens during downturns. When international growth is accelerating, yen-based investors chase high yield currencies such as the Turkish lira and Indian rupee. When sentiment wanes and global growth is decelerating, investors sell foreign currencies and buy back the yen, pushing up the value of the currency as a result. For reference, year-over-year growth in cross-border yen lending is shown below: 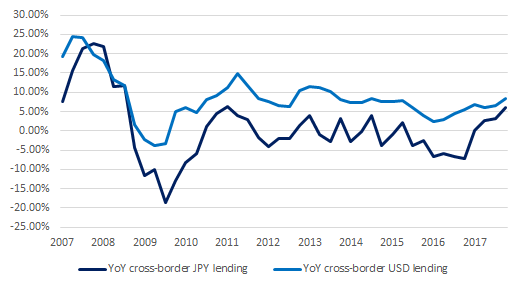 As can be seen above, cross-border yen and US dollar loans jumped significantly in 2017, providing fuel for global growth. Going forward, weakening sentiment and the base effects are likely to slow down the pace of cross-border loans in the future. This is particularly the case as global interest rates rise, increasing the cost of capital.

Following just one month of significant US dollar strength, significant problems are cropping up in Argentina and Turkey. More specifically, both the Argentine peso and the Turkish lira have experienced substantial declines versus other currencies. While these are the weakest emerging market economies, other emerging market currencies have also been fairly weak in recent history. All in all, it’s unlikely that problems in Argentina and Turkey are isolated.

As we wrote in a recent analysis on the US dollar, emerging market countries have enjoyed “easy money” conditions since the last financial crisis. Now that global sentiment is worsening while bond yields are rising, credit conditions are becoming much tighter. As a result, more pain lies in store for heavily indebted emerging market economies. Once more dominoes fall beyond Turkey and Argentina, expect traders to chase the relative safety of the yen.

When global optimism is high, the Japanese yen is a great proxy for inflation expectations given the Bank of Japan’s hesitation in changing its ultra-loose monetary policies. This narrative changes, however, once global growth is on a decelerating path. As the tide of easy money recedes, what’s hiding under the previous waves of liquidity is often not so pleasant. Without the promise of future growth, debt and deficits matter once again.

While the current outlook remains bearish, we contend that the ongoing trend is nearing its end. As global sentiment continues to deteriorate, expect the yen to move up in the near future and enter a bullish trend. In an environment of slowing growth, the yen's safe haven characteristics will return to the forefront.