Jacobs Engineering Group Inc. (JEC) has finished up some of the final details of its latest $2.85 billion CH2M deal, which will help the company refocus itself on higher margin projects moving forward. The recent surge in energy prices should help reignite Jacob's lagging businesses which have consistently underperformed the past few years. The successful CH2M integration, higher margins, and oil's recovery all should help propel the company forward in the back half of 2018, as long as the company can meaningfully reduce its new debt load back towards its historically low levels that investors are used to.

Jacobs's second quarter results included a $250 million final deal consideration payment for its CH2M acquisition, putting the finishing touches on a deal that is already producing results for the company. The growth the company is experiencing can be seen by the fact that the combined company's net head count has grown by 3,000 since the acquisition. This might lead investors to incorrectly think that this might be a drain on margins for the company. This is because the CH2M acquisition is orientating the combined company more towards higher value projects including new Tier 1 nuclear opportunities and possibly a significant water infrastructure investment cycle. A recent EPA survey cited $473 billion of infrastructure needs over the next 20 years to improve U.S. drinking water, which Jacobs could be a major player in after its CH2M acquisition.

Here's a look at how the company's revenues and margins have grown from the acquisition, even as the company is still in the early stages of taking advantage of synergies and cost savings. 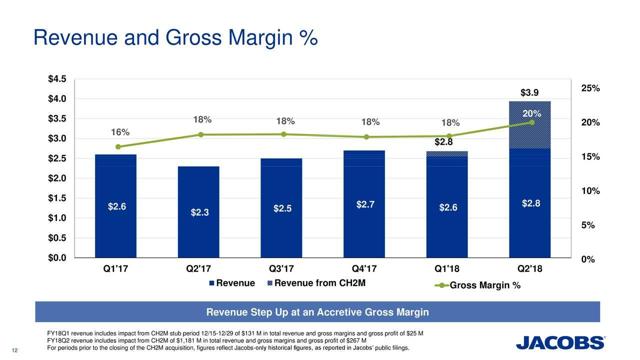 These results are pretty impressive as gross margins rose 140 basis points over last year's numbers even with all the acquisition costs for CH2M. Backlog is also up 9% from last year to $26.5B, not bad for a $9B market cap company, especially means they have completely reorganized their traditional lines of business down into three. 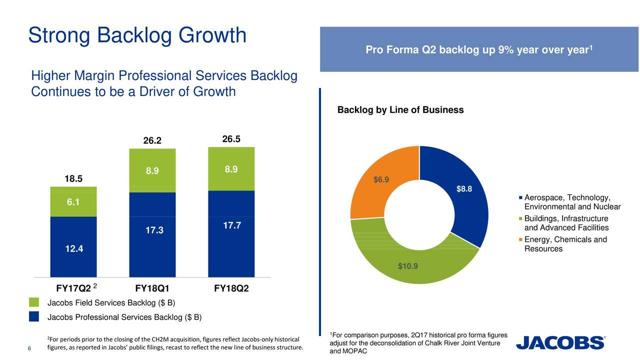 The oil recovery should also continue to help the company's new Energy, Chemicals, and Resources line of business, which has had a rough few years after oil's crash in 2014 from over $100 a barrel for WTI.

Revenue for this line of business was up 17% in the second quarter as oil continues to rally from its 2016 lows. The last few years have resulted in a lot of the costs and inefficiencies being driven out of this business line as production is now cheaper and more efficient then it was after the major oil rally preceding 2014. With $80 WTI oil possibly on the near horizon, a jump in spending in infrastructure, pipelines, and mining projects might be right around the corner.

Finally, one of the main issues to watch for in the back half of 2018 is whether Jacobs can accelerate its deleveraging now that its CH2M acquisition is complete. The $2.85B CH2M acquisition means that now Jacobs sits with approximately $800 in cash, after the second quarter, with gross debt now at approximately $2.5B. The company's historical track record of maintaining a strong investment grade credit profile was one of the reasons I initially took a position in this company years ago. With Jacobs currently paying a very modest ~1% dividend for shareholders, there should be plenty of free cash flow in the combined company for debt reduction, especially if margins continue to hold or improve from here. With its current gross debt leverage ratio around 2.2 times adjusted EBITDA at the end of Q2, I would look for the stock to start heading back towards its 52-week highs if the company can quickly start to remove this debt from its balance sheet.

Jacobs Engineering is having success fully integrating its CH2M acquisition with margins and revenues both showing great signs of growth. With oil continuing to rally to new highs not seen since 2014, the company's poorest performing line of business should show renewed growth and profitability. This could easily get the company back on track for some new 52-week highs if it can show sustained and meaningful deleveraging over the back half of 2018. Best of luck to all.

Trent Welsh
6.52K Followers
B.S. Psychology University of Missouri-Columbia MBA University of Missouri-Columbia Full time investor looking to capitalize on market overreactions and looking for value where others see nothing but wreckage. Long term buys and short term trades to build wealth.Investing Better Than A Money Manager: The Rise Of Retail Investing - By Trent WelshI have an investing book with the title above on Amazon written for beginning retail investors looking to set up a self-directed portfolio with their IRA's, 401k's, or other retirement or trading accounts. It details how to pick and choose stocks amidst the different sectors and how to figure out how much in each sector an investor should have to help achieve diversification.Please take a look at it and let me know your thoughts. Thanks and Best of luck to all :).

Disclosure: I am/we are long JEC. I wrote this article myself, and it expresses my own opinions. I am not receiving compensation for it (other than from Seeking Alpha). I have no business relationship with any company whose stock is mentioned in this article.