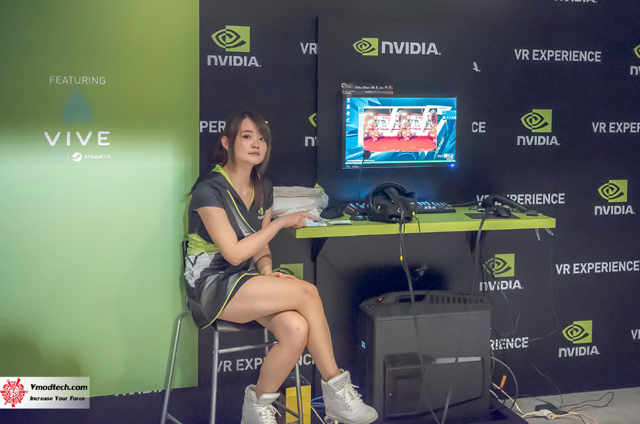 Nvidia (NASDAQ:NVDA) was a Portfolio Armor top name back in January of 2016, when it was trading at under $28 per share, as I noted in an article last year (What Happens When We're Right). It was also a top ten name as recently as February 22nd of this year. It's up since then, but more modestly. Last week, Seeking Alpha contributor Rong Huang, CFA raised the question of whether Nvidia was overpriced.

Although he concluded its growth story justified a higher share price, here I'll show a couple of ways NVDA shareholders can stay long while limiting their risk over the next several months, in case the market gets second thoughts about that growth story. First, let's recap how NVDA and the rest of my February 22nd top names cohort have performed since then.

Each week since June 8th of last year, I've been presenting Portfolio Armor's top names to my Bulletproof Investing subscribers. These are the names that, out of the subset that are hedgeable against single-digit declines, the site estimates will have highest potential returns over the next 6 months. So far, their 6-month performance has been fairly strong, as you can see in the table below (clicking on a starting date will pull up a chart showing the individual names that week, and their performance).

The February 22nd cohort will be added to that table on August 22nd, but here's what it looked like when I posted it on Bulletproof Investing then: 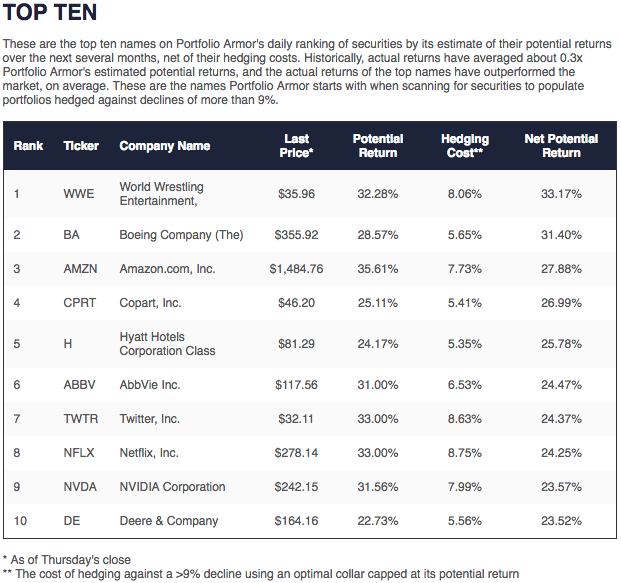 NVDA's performance since then has been in the middle of the pack:

NVDA is no longer a top Portfolio Armor name (it's currently #111 on the site's daily ranking), but the site still estimates a potential return of about 22% for it over the next 6 months. In the event it's wrong, let's look at a couple of ways you can limit your risk while staying long.

Limiting Your Risk In Nvidia

Let's assume you're long 1,000 shares of NVDA and are unwilling to risk a decline of more than 20% over the next several months. Here are two ways of hedging it (screen captures below are via the Portfolio Armor iPhone app).

As of Friday's close, these were the optimal puts to hedge 1,000 shares of NVDA against a >20% decline by late December. 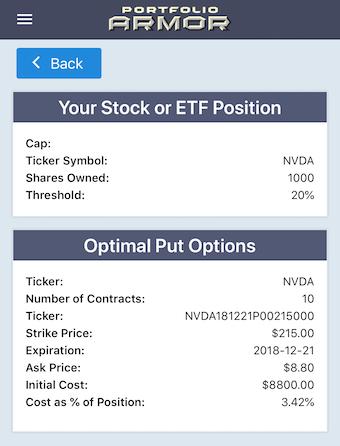 If you were willing to cap your upside at 20%, this was the optimal collar to hedge against the same >20% decline over the same time frame. 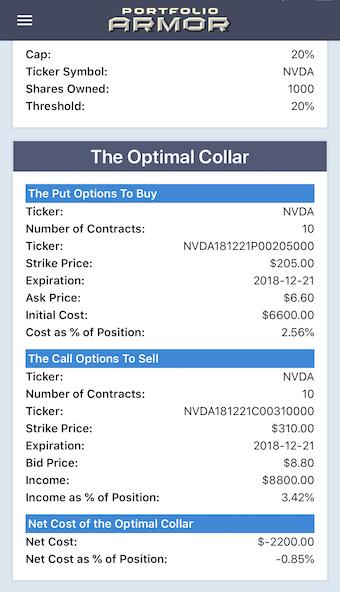 There are two things different about this hedge. The first is that, after an iterative process taking into account its net cost, the hedging algorithm was able to find a less expensive put strike, one that lowered the cost of the put leg to $6,600, or 2.56% of position value (calculated conservatively again, using the ask price of the puts). The second is that cost was more than offset by the income of $8,800, or 3.42% of position value, generated from selling the call leg (calculated conservatively, at the bid).

So the net cost was negative, meaning you would have collected a net credit of $2,200 when opening this hedge, assuming you placed both trades at the worst ends of their respective spreads.

The last two years haven't been kind to those who've bet against Nvidia, but there's always a risk the stock could suffer a pullback over the next several months. Both of the hedges above offer Nvidia longs a shot at additional upside while strictly limiting their downside risk. They might be worth considering.

To see this week's top 10 names, you can sign up for a free two-week trial here.

David Pinsen
18.77K Followers
I developed the hedged portfolio method of investing at Portfolio Armor, and I run a Marketplace service at Seeking Alpha based on it called Bulletproof Investing.