Investing in growth stocks can generate outstanding returns over the long term. However, growth stocks are also particularly volatile, and companies with superior growth can many times carry above-average risks too. The key, like usually happens, is separating the fundamentally sound companies with consistent growth prospects from companies going through a temporary phase of unsustainably high growth.

No quantitative formula can generate infalible results in the market. However, relying on cold-hard quantitative indicators to evaluate stocks is a far sounder approach than making investing decisions based solely on subjective opinions and speculation. In that spirit, the following article is introducing a quantitative system focused on investing in consistent growth leaders with strong fundamentals.

One of the main problems when investing in growth stocks is that it's not easy for companies to sustain vigorous growth rates in the long term. Growth tends to naturally slow down as a company gains size over time. Besides, success attracts the competition, and increasing competitive pressure in a high growth industry can have a negative impact on performance for the different operators in such market.

Since growth companies generally trade at demanding valuation levels, this can be particularly problematic. If growth slows down more rapidly than expected, then you end up paying an excessively high price for a company that cannot sustain performance over time. Consistency and sustainability are key considerations when investing in growth stocks.

The following quantitative system focuses on multiple time frames in order to find the most consistent growth stocks in the market. In particular, a company must have revenue growth rates above the 50% of companies in the industry overt three different timeframes: The most recent quarter, a trailing twelve months period, and the past five years.

Among the companies that meet the specified criteria, the system then selects the 50 stocks with the highest profitability levels. Profitability is measured by averaging six different indicators: return on investment (ROI), return on assets (ROA), return on equity (ROE), gross profit margin, operating margin, and free cash flow margin. These indicators are measured not only in comparison to the market in general, but also to the specific industry in particular.

Profitability by itself is a powerful return driver for stocks. All else the same, the highest the profitability a business generates, the higher the returns for investors in such business.

Besides, superior growth in combination with attractive profitability says a lot about a business. If the company is outgrowing the competition while also making more money than its peers, then it needs to have strong competitive advantages, such as a differentiated brand, superior technologies, or advantages of scale, among many other possibilities.

Leaving the mathematical considerations aside, it’s important to understand what the system is trying to do. In essence, we are looking for companies that generate revenue growth above most stocks in the industry on a consistent basis. Among those stocks, we are building a portfolio with the companies that generate the highest profitability metrics.

To begin with, the following backtested simulation excludes over the counter stocks and companies with a market capitalization level below $300 million from the investable universe. Excluding small stocks has a negative impact on returns, since these kinds of companies are generally more explosive and dynamic. However, this rule makes the system more realistic and easy to apply for investors who don't want to include small and illiquid stocks in their portfolios.

The backtest builds an equally-weighted portfolio with the 30 stocks recommended by the quantitative system, and it evaluates performance since 1999. The portfolio is rebalanced monthly and it has an assumed annual expense ratio of 1% to account for trading expenses and similar considerations. The benchmark is the SPDR S&P 500 (SPY) ETF. 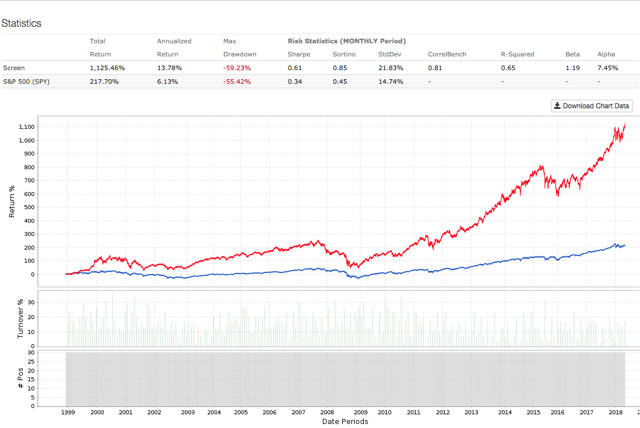 Backtested returns are quite strong. Since January of 1999 the system gained 13.78% per year, more than double the 6.13% annual return produced by the benchmark in the same period. In other words, a $100,000 investment in the SPDR S&P 500 in January of 1999 would currently be worth around 317,700, and the same amount of capital allocated to the portfolio recommended by the system would have a much larger value of over $1.2 million.

The table below shows the 30 stocks currently recommended by the system. The data also includes revenue growth rates in the last quarter, on a trailing twelve months basis, and over the past five years. As you can see, the list is quite diverse, and it includes both well-known market leaders with deep global reach and smaller players in niche sectors.

Past performance does not guarantee future returns, and only because a stock is included in the quantitative system, that doesn’t mean that it will necessarily produce market-beating returns going forward.

That acknowledged, making investing decisions based on quantified data is certainly a sounder approach than relying on emotions and subjectivities when picking stocks. If the statistical evidence is any valid guide, it makes sense to expect attractive returns when investing in companies with consistently superior growth rates and above average profitability levels.

Capitalize on the power of data and technology to take the guesswork out of your investment decisions. Statistical research has proven that stocks and ETFs showing certain quantitative attributes tend to outperform the market over the long term. A subscription to The Data Driven Investor provides you access to profitable screeners and live portfolios based on these effective and time-proven return drivers. Forget about opinions and speculation, investing decisions based on cold-hard quantitative data can provide you superior returns with lower risk. Click here to get your free trial now.

Disclosure: I am/we are long BKNG, FB, MA, MU. I wrote this article myself, and it expresses my own opinions. I am not receiving compensation for it (other than from Seeking Alpha). I have no business relationship with any company whose stock is mentioned in this article.