The spread between US 10-year Treasury yields and German 10-year yields has not been this wide since the late 1980s.

However, relying on this spread to contain US yields is problematic due to two strong opposing forces: US inflation & growing issuance.

This makes equity investment theses based upon the US 10-year remaining at or below 3% risky.

Spreads between German & Italian bonds made the news recently due to the impact on Bill Gross's portfolio of the big spike in Italian yields, which were a 15-sigma one day event. The wide spreads between Japanese and European debt (which have both been held down by QE) and US government debt (which has risen significantly since QT began) figure prominently in a number of bull-bear debates. The arguments go as follows:

Bear: US stocks are overvalued. Most of this over-valuation comes from artificially low interest rates due to QE. Now that QE is going away, (a) leveraged companies will need to pay a lot more to borrow and (b) even less leveraged companies values must come down due to the D in DCF going up significantly. Rates are headed for 3.5%, 4% or 4.5% (depending on whether the bear is a small brown bear, a big black bear, or a full-fledged grizzly).

Bull: Earnings keep going up and will counteract any increase in rates. Which, by the way, won't go much higher than 3%. The market handled 3.1% just fine, it can even handle 3.25%.

In this article we look at the US/German yield spread, discuss the cost of currency hedging and enlarge the debate on US rates from a bi-polar perspective to a multi-polar one (because this is the world we now live in). Finally, we go back to this part of the bear/bull debate and apply this new angle to see if anything shakes out.

In Figure 1 we show the history of the Treasury-Bund spread going back to 1986 to show the last time it was this high. 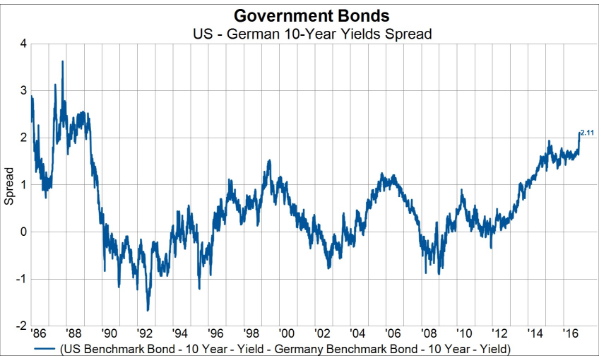 We don't think it is particularly fruitful to compute Z-values on charts such as these and make reversion bets without understanding what drives these spreads. For one, this assumes a stationary, single-distribution "normal" process while most long-term participants in fixed-income markets understand that a multi-regime view is much more appropriate. Additionally, having an understanding of fundamentals driving relationships always puts a trade on much better footing than the signal that could be provided by a 1880s statistical model.

In particular, it is instructive to zoom in on other periods where the spread has been north of 150 bps and ask what those periods have in common with the current one and then use this analysis to determine whether further widening or mean-reversion is more likely. For example, the long-term average of this spread series is 80 bps. However, the average for the entire decade 1980-89 was 265 bps. On the other hand, the spread for 1990-2017 averaged 31 bps.

Figure 2: US Deficit as Percent of GDP

The 1980s had high inflation and budget deficits. After the 1990s recession the US budget picture improved greatly, leading to a surplus by 1998, and even after the collapse of that surplus and a huge increase in deficits due to the great recession, inflation collapsed and remained sub-2% until quite recently.

So the major questions seem to be: what will US deficits and inflation do the next few years? The recent budget and tax-cuts have definitively answered the question on deficits. Therefore, any bet on spread mean reversion (or, more accurately, remaining in the lower-spread regime rather than the higher spread regime) requires CPI to remain contained. Additionally, apart from the spread angle, US yields remaining at or under 3% also require Euro area yields to remain low. If one constraint on US yields is how low EU yields are, fighting against that constraint are the cost of currency hedging the $/EU basis and the risk of QE in the EU zone ending. And apart from that constraint (which, I think the charts above show, isn't really a constraint, but simply a relationship subject to inflation and deficit relationships being maintained) we have the data in Figure 4 which impact CPI data given that wages account for roughly 2/3 of CPI.

The much-discussed death of the Phillips Curve seems to be resolving with the understanding that the low unemployment level was one of only several variables that were required for wage growth to resume. There was much excess capacity hidden in the form of temporary/part-time workers who wanted to work more, and discouraged workers who were not being counted in the unemployment rate. Additionally, there was a demographic explanation at work as well - given that a retiring baby boomer replaced with a 20-something results in a net savings in wages spent. More nuanced statistics, which look at wages controlling for age of worker, show that wage growth is actually alive and well.

Therefore, it appears that analysts who looked at 5-years of low inflation data and announced a new era with no wage growth were making the same mistake as those looking at the Bund-Treasury z-score and calling a top to the Treasury 10-year yield at 3%: it is essential to look at the fundamentals driving long-term relationships. Granted, the fundamentals may yet support a 3% cap to 10-year yields, but until you have examined them, you are driving blindly in fog on what could be a road that still has miles to go, or you could already be at the edge of the cliff.

The fog is considerably thicker than it was in the 1980s because there are new players in town which simply didn't matter back then. Enter: China, which also has a global reserve currency and yields across the curve north of 3% (Figure 5). In the 1980s China was a two-bit player in the global economy and no money manager would be parking money in Chinese bonds. Now it is the second largest economy in the world, an accepted reserve currency, and 5% of global central bank reserves have already moved over to CNY; the IMF has included it in its special drawing rights. It effectively competes against the dollar as a place to park money (whether saved in the middle east from oil earnings, or excess reserves from high positive current account exporting nations in Asia/Europe) while the US is currently doing its best to rattle its allies on trade policy and diminish its overall attractiveness as a safe haven. 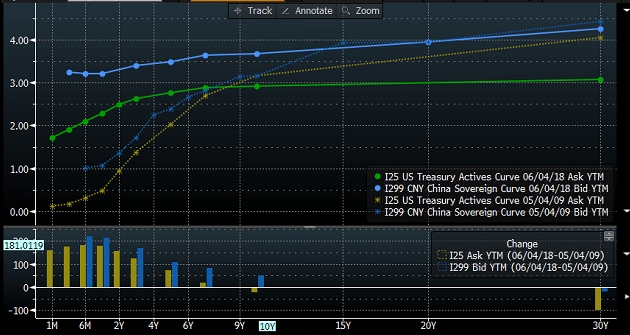 How does this affect the Bund/Treasury spread constraint? Well, if the reason that the two have anything to do with each other is that both are unassailable AAA credits (despite what the rating agencies say) and reserve currency denominated, then it follows that having a fourth highly rated sovereign which also has a reserve currency must change the fundamental spread dynamic. Money that either had to go to Europe or was forced to go to the US if EU yields were too low now have another option (we ignore the completely dysfunctional Japanese option with basically zero yield on offer across the board for the purposes of this discussion).

Will everyone take this option? Obviously China has to strengthen a bit more for it to be viewed equally to Germany and the US (it is already viewed favorably w.r.t. JPY based on reserve holdings data). But the drama in Washington shows that we are doing our best to make that day come sooner, rather than later.

Figure 6 shows the exchange rate between the Euro and CNY. The recent period where the dollar has been strengthening against the Euro has also been a period where the CNY strengthened against the Euro. This at least makes plausible the claim that we should take this new player in town seriously for at least some percentage of global capital flows - if not for the most conservative of central banks, then at least for corporate treasurers, pension managers and sovereign wealth funds willing to take a modicum of reputational/career risk to gain a spread edge. 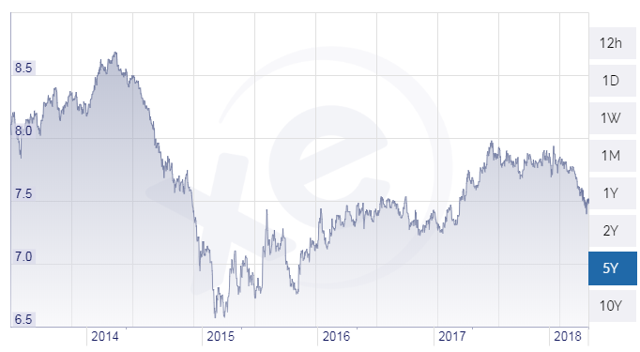 Returning to the Bull-Bear debate we started with, let's summarize our reasoning:

Stepping a little further into what is safer and less safe in such an environment we can make a few observations:

Cash rich corporations with fast growing earnings will survive a rise in US yields much better than heavily indebted companies with questionable earnings growth theses (AAPLs earnings grow with interest rates, for example, as it is net long a huge pile of cash). Companies whose prices are indexed to inflation or an inflation proxy will do a whole lot better than companies in very competitive areas where prices are held in check (MLPs with earnings tied to PPI and volume vs. car companies with lots of debt and cutthroat margins). Adjustable rate loan funds, naturally, will be great places to park cash while awaiting redeployment opportunities. And finally, short-term gyrations aside, the cash rich and fast growing earnings are good whether they are based in the US or somewhere else.

The entry point may not be best right here and now but the exit point may be a lot closer than many are willing to admit. A year or two earning 2-3% in cash-like instruments seems like a pittance compared to last year's QQQ return and naturally makes one greedy for more of that double-digit fever. On the other hand, the returns of QQQ shown in Figure 7 should make us fearful indeed! Even 10-years later, QQQ had recovered only half in price terms and its dividend level simply did not make up for it.

Which brings us to our final point: if you need cash to live on or for any important expense, whether in 3 or 5 years, you can hope to sell your equity holdings at that time (and hope we are not anywhere near a period like the one depicted above). Or you can invest in a dividend portfolio (alternatives range from 3% to around 5-6% depending on the sector concentration you are willing to tolerate) that over a flat 10-year period for your principal investment still gives you between 30 and 60% dividend return.

Follow Long-Short Manager and get email alerts
+
Add a comment
Disagree with this article? Submit your own.
To report a factual error in this article, click here.
Your feedback matters to us!