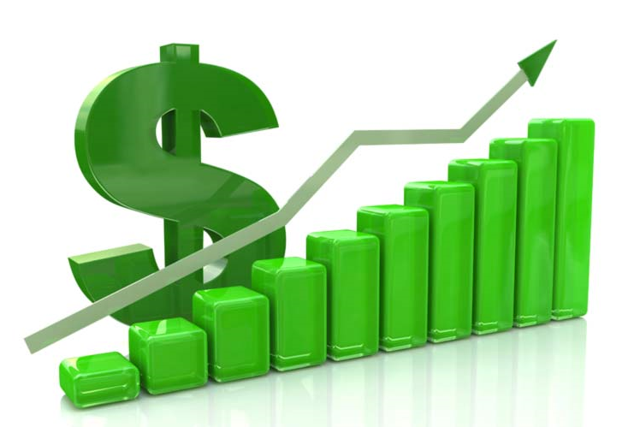 Goldman Sachs (GS) published a report analyzing the impact of interest rates on forex returns. Throughout 2017, analysts have noted that short-end interest rates in the U.S. have increased more than those in other major markets. But then, growth expectations underperformed. At the very least, this market expectation was ahead of the legislative push on tax reform. GS added that the downgrading of relative growth prospects may have contributed to U.S. dollar weakness during this period.

So far this year, the US dollar has performed best among the G10 currency rates. Changes in market fundamentals may have caused an appreciation in the U.S. dollar since mid-April. However, forex technicians may have also played a key role. This would explain the size and speed of the exchange rate movements.

In this econometric analysis, we will probe deeper if the market speculation of Goldman Sachs holds true that interest rates will predict forex returns in the near term. We will look at key interest rates, equity market performance and growth expectations that potentially explain the stability of the greenback to date. 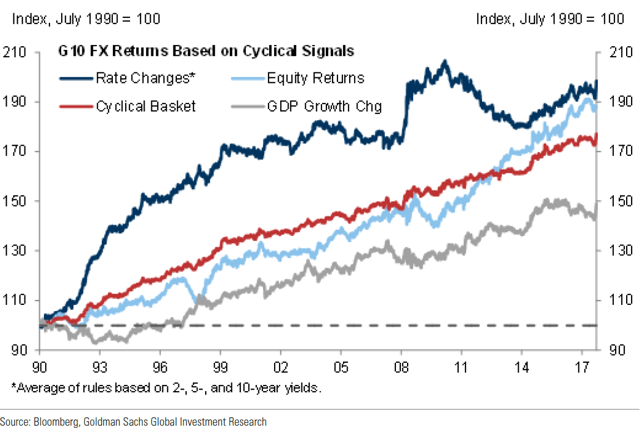 Analysts monitored three key high-frequency trading indicators of the US dollar positioning. These include economic data surprises, risk reversals (for broad market data) and net length in futures. The two key low frequency trading indicators were also analyzed such as the US' share of foreign exchange reserves and the share of cross-border assets. 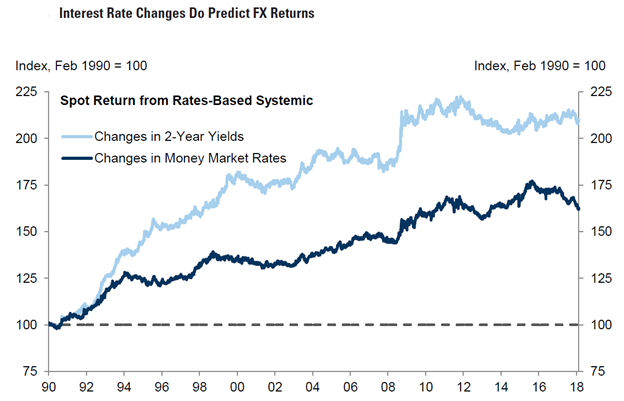 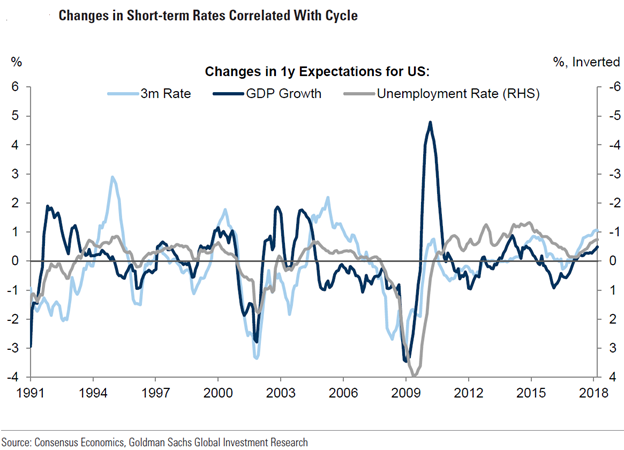 Higher U.S. interest rates will be particularly concerning for risk-sensitive G10 and Emerging Markets assets if these are accompanied by equity market weakness. Among these, the New Zealand Dollar (NZD) is the most vulnerable G10 currency. Its high sensitivity to variables like equity markets performance will be exacerbated by a lack of real interest rate advantage, overvaluation and a highly responsive government bond market. 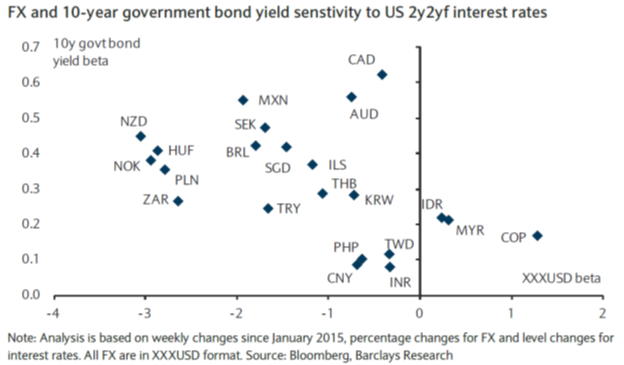 The other key source of U.S. dollar positioning comes from risk reversals, which tell investors the relative price of forex call options and put options as expressed in units of implied volatility. Larger demand for a specific currency will pull up the market price of calls relative to puts (and vice versa). Thus, this makes risk reversals an advantageous indicator of market sentiment. 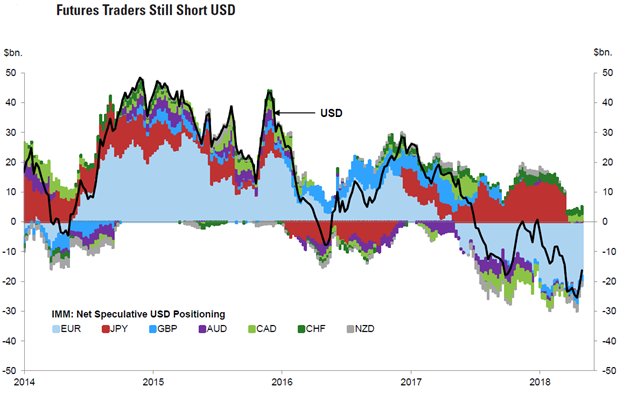 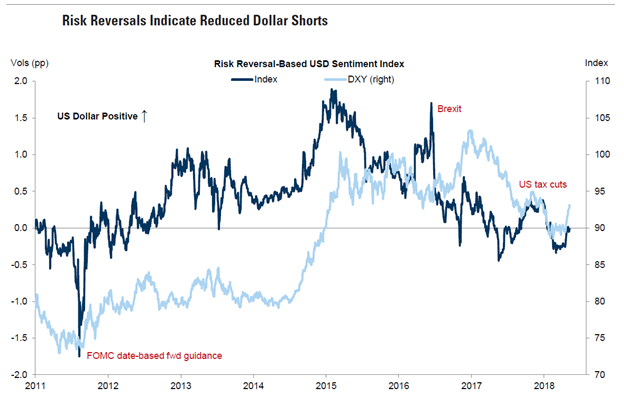 Over the last four to six months, the U.S. dollar reacted more to positive surprises than negative ones. It implied net short positioning. 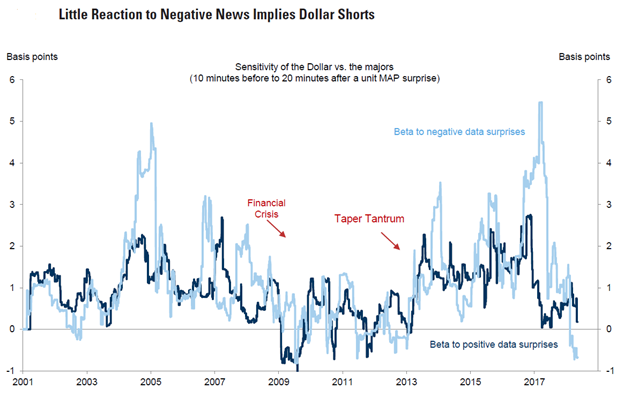 I remain upbeat on the soundness of the global economy. I expect strengthening growth to continue outside the U.S. despite rising commodity prices and gradual monetary policy normalization in stable economies. It would boost many currencies at the expense of the greenback this 2018.

Although I must say both short and long-run technical considerations also support my own view of the U.S. dollar, I have noted market indicators (growth expectations, trailing equity returns and other cyclical variables) point to a mildly near-term trajectory, yet a still-negative medium-term outlook for the U.S. dollar.

The lower long-term U.S. interest rates however may provide some comfort to risk sensitive G10 and Emerging Markets assets. I favor a long 10-year UST trade recommendation. I believe this will expect yields to drop toward 2.7%. Equilibrium real interest rates remain unchanged.

The Federal Open Market Committee (FOMC) forecast an average for long-run interest rate would probably remain at 2.8%. Long-term interest rates are not expected to push up terminal rates, as the tax cuts and spending are unlikely to increase potential output or bring about additional tightening.

Weakness in trailing equity returns would push higher U.S. interest rates that would weigh on risk sensitive G10 currencies. Domestic U.S. policies and uncertainty about trade and the foreign U.S. policy will tilt more toward protectionism and hawkishness.

Tariffs on steel and aluminum will be introduced while exemptions are being worked out. A potential retaliation from the non-exempt U.S. trading partners remains to be seen. As a result, risk sensitive G10 currencies would underperform the U.S. dollar while safe haven assets will perform well.

U.S. dollar positioning reached historical low levels early this 2018. Investors must scrutinize the index of U.S. dollar positioning. Currently, the DXY index is equally-weighted across G10 currencies. So, comparing the U.S. dollar to the DXY index will have a much lower weight on EUR while a higher weight on NZD, AUD and NOK. By this guidance, the U.S. dollar length reached an "extreme" in early 2015 and has declined since that time. However, the dollar length equation exempts certain macro events like the passage of U.S. tax cuts and few periods around Brexit.

Note: This article was written by Gold News business journalist Hans Centena. If you found this article to be informative and would like to hear more about my investment research, please consider hitting the "Follow" button above.

Additional disclosure: Gold News is not a registered investment advisor or broker/dealer. Readers are advised that the material contained herein should be used solely for informational purposes. Investing involves risk, including the loss of principal. Readers are solely responsible for their own investment decisions.

Follow Gold News and get email alerts
+
Add a comment
Disagree with this article? Submit your own.
To report a factual error in this article, click here.
Your feedback matters to us!