In 2008 a global financial crisis with roots in the U.S. housing and European sovereign debt markets threatened the world with a deep recession or worse. The Chairman of the U.S. Federal Reserve at that time had done his doctoral thesis on the Great Depression, and Ben Bernanke pulled out all tools possible when it came to monetary policy to avoid a repeat of the 1920s. Many central banks around the world followed the U.S. central banks, slashing short-term rates to unprecedented levels and instituting programs of quantitative easing or purchasing debt securities to lower rates further out on the yield curve. The QE programs in the U.S. and Europe caused the central bank to interfere with the free market price action in government debt securities. In
Europe, the program included some high-quality corporates issues. At the same time, financial institutions stung by the financial issues in 2008 were saved, and the government deemed most, too big to fail.

The program that encouraged borrowing and spending and inhibited saving avoided the worst economic case in the years that followed and economic conditions have improved dramatically now that one decade has passed.

Over the course of the past ten years, Europe has found itself bailing out Greece and dealing with the continuing problems associated with blending the economies of northern and southern European members of the Union. The economic culture of the North and South has caused issues for almost three decades, and last week the issue arose again as Italian debt issues tanked in response to political events in the EU's third-largest economy.

On Tuesday, May 29, selling in stocks and a flight to quality greeting U.S. markets after the long Memorial Day holiday weekend. The issue impacting markets across all asset classes came from Southern Europe once again. After dealing with Greece and the potential for defaults that led to a bailout of the EU member just a few short years ago, Italy took center stage as the next troubled nation that could present lots of problems in Brussels with the EU and Frankfurt with the ECB.

The Italian electorate had become fed up with austerity measures that weigh on an economy that depends heavily on tourism. The heavy-handed German-style austerity is something that Italy and their Mediterranean neighbors have long resisted. In the aftermath of Brexit in 2016, political parties stressing nationalism and a departure from the EU and euro currency have seen their power grow.

A recent election and an attempt to appoint an anti-euro finance minister caused faith in the future of Italian participation in the EU and currency to decline and selling hit the Italian bond market in waves. As the yield on Italian bonds rose, the fears of contagion from two perspectives hit markets around the world. First, the potential for a spread of problems to Greece, Spain, and Portugal could cause a widespread crisis for the Union. Second, the amount of Southern European debt held on the books of the leading European financial institutions could trigger a banking crisis at companies that are too big to fail. The bottom line is that the European Central Bank, Union, and its members received another reminder of the cultural divide that impacts economics. Last Tuesday, the Italian bond market suffered its worst day in over twenty-five years. Other markets around the world braced for the fallout resulting in a flight to quality for at least one day.

Economic growth in Italy had come to a virtual halt since it adopted the euro as a founding member in 1999. The problem for Italy and other southern members, is that the euro rules limit government spending and deficits, with can stimulate growth.

While many blame Italy for not making its economy more competitive, a long history of corruption, high labor costs, and a spider's web of bureaucracy make Italy an expensive country in which to do business. Moreover, Italian exports find it hard to compete in global markets.

The problems facing Italy are not unusual in Southern Europe. However, the trigger for the selling in the Italian bond market last week was the result of a recent election that told markets that the electorate had had enough.

"Quitaly" is not out of the question

In Italy, the 5-Star Movement and anti-immigration League party won enough votes in a March 4 election to form a government. Both parties have advocated leaving the euro to take over complete control of fiscal and monetary policy. The move would result in a "Quitaly" or divorce British-style from the euro and European Union.

The current President Sergio Mattarella rejected a proposal from the parties to appoint an anti-euro economist as the nation's finance minister. The fight between the President and parties that are rising in power could trigger a new election which would be a referendum on the euro. Given the Brexit result, and the problematic environment in Italy, an exit from the EU and euro is unlikely, but certainly not out of the question.

The current problems facing Italy and the potential for a political solution that does not include the euro or European Union could spread to other suffering nations including Greece, Spain, and Portugal.

Meanwhile, lots of financial institutions around the world hold significant positions in southern European debt issues. Quantitative tightening by the ECB placed a put option under many issues, but it is questionable if the floor will remain stable if the political bottom falls out of member nations.

One of the major holders of European debt is Deutsche Bank, the leading German financial institution. 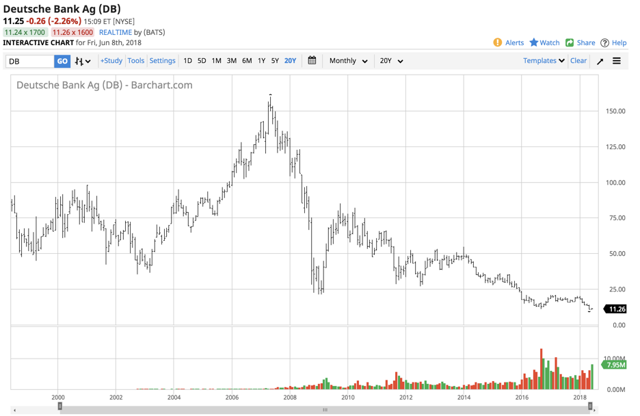 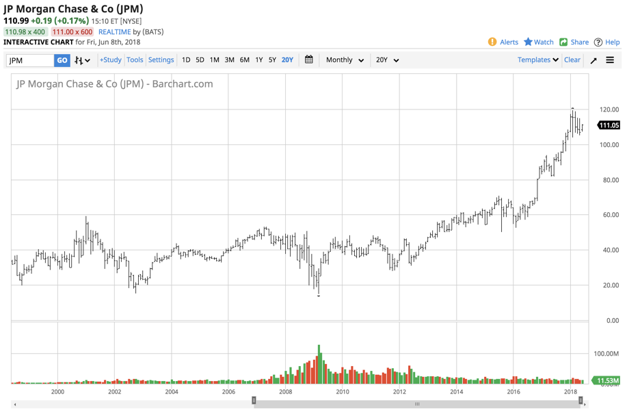 Recent stress tests on DB's balance sheet were problematic for the Fed and the Italian issue last week sent the shares even lower as their coffers are full of questionable European debt.

Global economic growth over recent months and years had raised the markets hopes that the European Central Bank would begin to pivot from accommodative monetary policy to tightening credit. However, short-term rates remain at negative forty basis points, and quantitative easing has not come to an end, even though the Fed is allowing the legacy of QE to roll off their balance sheet these days.

The Italian issue and potential contagion will likely keep the pressure on the ECB for more than the short-term. Moreover, if a referendum on the futures of the euro takes place in Italy or other southern members of the EU, we could see an indefinite continuation of accommodative monetary policy as the ECB moves from financial fire to fire across the Mediterranean.

Deutsche Bank will not fail, no matter how bad things become. The failure of Europe's leading financial institution would be a disaster for the ECB, EU, and the rest of the world given the many trading relationships and deals with other banks, governments, and institutions around the world. DB is truly too big to fail, but its shares are not too big to fall. The current environment continues to paint a bearish picture for the equity. Additionally, there could be problems for many other European banks who hold debt that can fall as a result of elections or policy changes that reflect the will of the electorate which is becoming increasingly impatient with decisions and policies from Frankfurt.

Too big to fail does not mean too big to fall, and in the world of European financial institutions, this is likely to be an issue over coming months. We should not discount the potential for contagious price issues for even the strongest financial institutions in the United States and around the world. The bottom line is that the problems in Italy are a sign that Europe's financial house is far from in order.